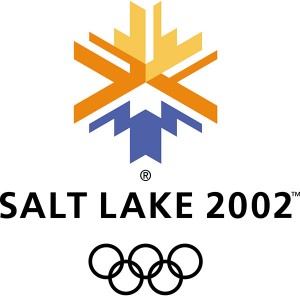 Imagine it’s the afternoon of Feb. 9, 2002, and you’re making your way across downtown Provo toward The Peaks Ice Arena. Within minutes, a hockey official drops the puck at center ice and Utah County’s first-ever Olympic event is under way as part of the 2002 Winter Games.

While the best hockey players in the world scramble to put the puck in the net, thousands of fans from all over the globe cheer from stands surrounding the north rink at the impressive new $13 million Peaks Arena. Dozens of journalists take notes in various languages as they prepare to send glowing stories to readers in their home countries, and scores of Olympic volunteers happily do everything from mop excess water from the floor to usher ticket-holders to their seats. 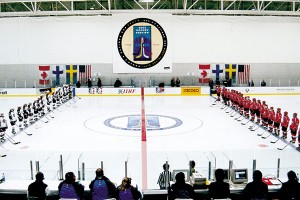 The Four Nations Tournament at The Peaks Ice Arena in Provo gave Olympic officials a glimpse of what they still need to iron out to be ready for 2002.

The action on the ice is fast and furious, while the international flavor of the entire experience is once-in-a-lifetime.

Imagine it’s the afternoon of Feb. 9, 2002, with thousands of cars and dozens of shuttle buses on their way to The Peaks jamming Provo’s narrow Center Street. You see the flags of various countries hanging from light poles downtown and wonder how much of your tax money was spent on decorations that can be used only for a single two-week period.

You’re not actually going to see Olympic hockey at The Peaks because all the tickets were sold out a year ago. Besides, tickets were too expensive for your budget, anyway. You hear on the news that hockey players are acting boorishly, trashing the locker rooms like the U.S. men’s team did in 1998 in Nagano, Japan.

The journalists are complaining to their readers about Utah’s lack of snow and insufficient public transportation. The writers are also grumpy because they can’t get a drink and because sportswriters are always grumpy. Television journalists can’t seem to stop making references to the Salt Lake Olympic bid bribery scandal.

You don’t feel much international camaraderie and you wish either the Olympics had never come to Utah or you had gone out of town until they were over.

Which of these two scenarios is reality?

Probably parts of both, although judging from a critical test event held in Provo in November 2000, the former scenario seems more likely than the latter.

With just over a year to go before Utah County and the rest of the Wasatch Front take center stage in the world’s theater, the plot has yet to be written. But if the drama that was the 2000 Four Nation’s Women’s Hockey Tournament was any indication, the characters will be fascinating, the stage will be adequate and the stagehands will be ready. Even the critics might have a good time. 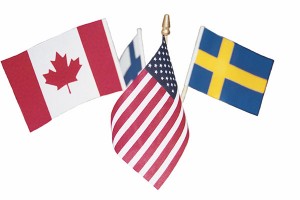 The four Nations Tournament included women’s hockey teams from the United States, Canada, Sweden and Finland. Provo City had flags of the four countries around the city streets and in The Peaks Ice Arena.

The Four Nation’s Tournament was not called a “test event” without reason. Everyone from the players and coaches to the journalists and Zamboni drivers went through their paces in preparation for the Olympics. Off the ice, a local committee coordinated efforts with the Salt Lake Organizing Committee to oversee everything from transportation and hosting of athletes to security and parking.

Local organizers also focused on details such as placing inspirational notes on athletes’ pillows each night before the players returned to their rooms in the Provo Marriott Hotel. Each athlete received a welcome bag with Nu Skin products, a Novell T-shirt and music CDs from recent performances at Provo’s July 4 Freedom Festival.

“Our goal was very simple,” said Provo Economic Development Director Leland Gamette, who helped coordinate marketing and hosting during the November tournament. “We wanted the players to have a good time in Provo and we wanted to let them know that we are going to be excited to have them come back for the Olympic Games.”

While players from the United States, Canada, Finland and Sweden worked to make a good showing so they can earn spots on their respective Olympic teams, The Peaks Ice Arena itself also underwent an evaluation.

Managers of the Olympic venue — built with a combination of public, private and Olympic funds — now know there’s a leak in the press area and the ticket booth is on the wrong end of the building. Despite the glitches, however, The Peaks came through the November event with flying colors.

“We are going back to Canada saying the Games in 2002 will be well taken care of,” said Canadian coach Daniele Sauvageau, whose team won the gold medal with a thrilling 2-0 victory over the Americans on the tournament’s final day.

Despite a dispute with the building’s general contractor over a faulty chiller, officials at The Peaks were pleased with the way the Four Nations Tournament turned out. The Peaks and constructor Hogan & Associates of Centerville have been embroiled in a debate for months about who is responsible for a leaky refrigeration system used to cool the concrete under the ice at The Peaks’ two arenas.

Although the chiller still does not function properly, the ice received rave reviews from those at the November test event, especially after Sandy resident Dan G. Craig arrived. Craig, the National Hockey League’s ice technician, left nothing to chance as he supervised the preparation and maintenance of the ice.

“I watch details,” Craig said while asserting the leaky chiller did not affect ice preparation. “If they have a problem, I don’t know about it. I’ve gotten all the temperatures I’ve asked for.”

Craig brought in several NHL Zamboni drivers as he began to assemble a staff that will maintain the ice during the Olympic Games. One of the professional drivers was Jill LeGault of the NHL’s Anaheim Mighty Ducks. LeGault has been driving Zambonis ever since she was in school at the University of Michigan about six years ago.

“I’ve always watched hockey and everybody who watches hockey thinks the Zambonis are cool,” LeGault said. “It’s a combination of worrying about how much ice you’re taking off, how much water you’re laying down, making the turns, not missing any spots and not making a fool of yourself.”

During the tournament, Utah County schoolchildren — designated to cheer for one team or the other — packed the arena for day games while hundreds of fans paid $5 each to see the night games. Everybody seemed to be having a good time, although some of the U.S. players wondered why more fans cheered for the Canadians than for the Americans.

“(At the Olympics), we will really have a home ice advantage, as long as we can get the American fans to show up,” deadpanned U.S. player Angela Ruggiero.

At the gold-medal game, Orem resident Barry Casper sported a unique look by painting an American flag on one side of his face and a Canadian flag on the other — “just for the fun of it.” 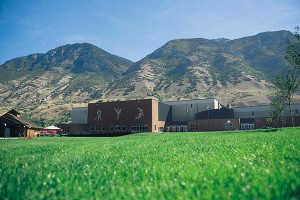 The Peaks Ice Arena was built with a combination of public, private and Olympic funds, and it will host 25 hockey games during the 2002 Winter Olympic Games.

Nineteen-year-old Minnesota high school hockey phenom Krissy Wendell stormed onto the international women’s hockey scene by leading all players in scoring at the April 2000 International Ice Hockey Federation’s Women’s World Championship in Ontario. But few who witnessed the display put on by Wendell in Provo will disagree that November 2000 was the date that the future of U.S. women’s hockey became the present.

Wendell, just six months removed from leading Park Center High School in Brooklyn Park, Minn., to a state high school hockey championship, scored a modest six points (one goal and five assists) during the Women’s Four Nations Cup. Wendell’s smooth skating and shifty handling of the puck, however, clearly demonstrated that the 5-foot 6-inch teenager who wears No. 17 is ready to assume a leadership role on a team stocked with the most talented female hockey players in the world.

In 1994, Wendell became the first girl to start in the Little League World Series in Williamsport, Pa., playing catcher and batting third. She is still an all-star softball player, but her most amazing feats come on the ice.

In her senior year, Wendell set a Minnesota high school hockey record by averaging more than four goals and two assists per game as the Park Center Pirates claimed a state title. A member of the boys’ varsity hockey team as a sophomore, Wendell established high standards of performance for future female players to measure themselves against: Besides scoring a record 110 goals as a senior (breaking her own record of 109 set as a junior), Wendell was named Ms. Hockey for Minnesota.

Playing against high school competition might seem a far cry from lining up against the best players in the world, but Wendell made the transition without missing a beat. By the time the U.S. women’s team traveled to Provo from its training camp in Lake Placid, N.Y., Wendell — along with 1998 Olympic veterans Cammi Granato and Tricia Dunn — anchored the U.S. team’s No. 1 line.

Although she and her teammates were disappointed at losing the gold-medal game to the Canadians at the Provo tournament, Wendell clearly enjoyed herself all week. Her speed terrified opposing goalies as she swooped in toward the net, and her stout elbows sent more than a few Canadian skaters sprawling.

“It was fun to play on home turf and get the home crowd behind us, especially when they were chanting, ‘USA!’” Wendell said. “It’s a beautiful rink and the ice was fast.”

Among all the lessons the Women’s Four Nations Cup taught Provo about Olympic preparation, the most enduring probably dealt not with logistics and equipment but with the spirit of the Games themselves. The international camaraderie, the excellence of players like Wendell and the celebration of human achievement presented themselves in remarkable fashion this go-round. They can only be magnified in 2002.

To cap it off, The Peaks will host two men’s quarterfinal games and the bronze medal game for the women. Each of the 25 games will accommodate 8,500 spectators. About half the space in the stands will be reserved for journalists, Olympic athletes and other officials. Remaining seats — particularly in stands on the north and west ends of the rink — were offered for sale to the public beginning in October 2000.

With just over a year to go, Provo officials are coordinating efforts with downtown businesses to decorate the city and provide visitors with things to do. In addition, art museums at Brigham Young University and in Springville are making ready to host exhibits as part of the Cultural Olympiad.

The idea has also been floated that Utah County could take advantage of its large percentage of residents who speak foreign languages. One plan would put buttons on residents certified to speak particular languages in order to help visitors feel welcome and give them access to help in their own languages.

“The thing that I want is for the people who come to experience the Olympics to have a good time,” Gamette said. “We want everyone from gas station attendants to maids at the hotels to be conscious of being good hosts — not to make a killing financially but to put the best foot forward.”