LaVell’s Game Plan For Next Season 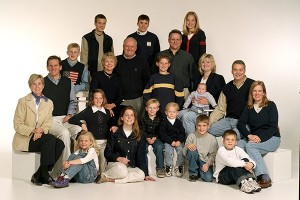 This family photo of LaVell and Patti Edwards with all of their children and grandchildren (minus one grandson on a mission) was taken hours before Cougar Stadium was renamed “LaVell Edwards Stadium.”

Photographs by Mark A. Philbrick / BYU and Doug Martin

For years Patti Edwards has made gameday stew to eat after the BYU football games. Her own concoction of stew meat, cream of mushroom soup, potatoes, carrots, and Lipton onion soup simmered for the five or six hours it took to go and support her husband and 29-year veteran coach of BYU football, LaVell Edwards.

Whenever possible the couple’s three children and 14 grandchildren came to the games and, of course, went to grandma’s afterward for gameday stew.

“By the time I got home, it was usually gone,” LaVell chuckles.

One of their 14 grandchildren asked Patti if they would still have gameday stew even though Grandpa LaVell would no longer be coaching the Cougars.

“Of course,” she said. “But from now on gameday stew will be a lot more fun.”

Not that she hasn’t had fun as the head coach’s wife for the past 361 BYU football games. It’s been a great experience, she’s quick to point out. But it didn’t start out that way.

“When LaVell first started coaching, I hoped football was like measles and that it would go away,” Patti says with a laugh. “But I changed my attitude, and I’ve been happy about it ever since.”

LaVell will tell you his wife has been his greatest supporter as a football coach, but when the time came to call the last play, the couple was ready. 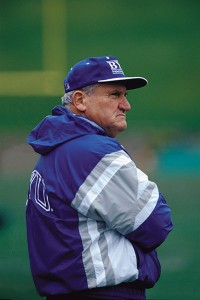 LaVell Edward’s signature look saw him through 361 games at BYU. Now he and his wife are looking at new options, including an LDS mission and time to rest.

Now this next season is their season, and the Edwards have a new gameplan: step back to look over the options, which include church service, travel, time with family and a chance to relax.

“We’re both very tired,” Patti says. “We’re going to rest, enjoy our grandchildren and just sit back — and eventually we want to go on missions.”

Their past 29 years at the head of BYU football has been a long missionary training experience of sorts. Hundreds of players have come through the program who haven’t been LDS, and most of the coaches LaVell has come to know and even golf with haven’t been of his faith.

“Anytime someone is in leadership they develop skills that can be used in other leadership positions,” LaVell says. “I’ve learned so much in directing the program and getting a lot of people involved, which I think is also useful in church callings and missionary work.”

While LaVell and Patti don’t have a timetable for when their missionary service will begin, from the outside it is apparent that the mission is already started.

Patti always knew the players and their families. In fact, at the beginning of each fall, Patti hosted a lasagna dinner for the players’ wives. She also attended countless weddings and baby blessings.

The entire Edwards family gathered for LaVell’s last game when the stadium was renamed after him. Ann Cannon, the Edwards’ daughter, says her favorite memory of the day was watching the players give her mom high fives as she walked onto the field.

“She always tried to befriend the assistants’ wives and make them feel as safe as possible in a precarious profession,” Ann says.

And LaVell followed her lead. 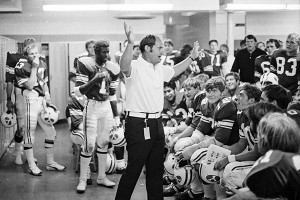 BEING A LOCAL CELEBRITY

Success and fame can change a celebrity — as LaVell is in our area. But he takes it all in stride, thanks in large part to Patti.

“I don’t think my father would have let any of the attention he’s received over the years go to his head, but for sure she has helped to keep him grounded, to not take himself too seriously,” says Ann, who now writes for the Deseret News.

No one — including LaVell — took him seriously when his BYU coaching career began.

“We were fortunate that when our kids were growing up, there was not the same aura around being the BYU football coach,” LaVell recalls. “It just wasn’t that big of an issue.”

The issue now is regaining more of that privacy he had in his early coaching career. But as LaVell leaves the football chapter for his next season, he wants the community to know he’s thankful.

“I’ve truly enjoyed the support over the years,” LaVell says. “It is so fulfilling to know we’ve built this big stadium in this small community and kept it filled virtually every game.”

Yes, LaVell has shaped our community. And while he’s taught us, he’s also learned a few lessons himself.

But, seriously, his most important lesson has nothing to do with football.

“I never think about passing records or anything like that,” LaVell says. “All of my memories and lessons come from what I’ve learned about the human process and relationships.” 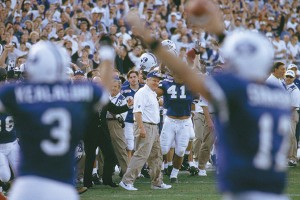 Top on LaVell’s list of relationships is, obviously, his family. The Edwards’ three grown children live in Bountiful, Salt Lake City and Las Vegas — and none of them is involved in football — one is a writer, one a doctor, and the other an attorney.

But leaving their dad’s BYU football legacy behind isn’t easy.

Ironically, now that LaVell is retired, the Edwards family may have to work harder to find time together.

“Football games provided a natural way for us to come together — to play, talk, eat, laugh,” Ann says.

“Having LaVell officially retire is providing closure for our kids and grandkids,” Patti says. “They are glad for us even though it’s hard on them.”

Patti thinks it might be the hardest on the grandchildren.

“We have a grandson in Belgium who doesn’t think he can stand not seeing his grandpa coach another game,” Patti says. 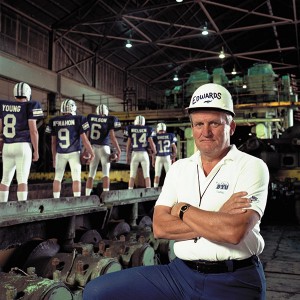 LaVell Edwards put BYU’s football program on the map, including earning the distinction of “Quarterback U,” with the likes of Steve Young, Ty Detmer and Jim McMahon.

Some of LaVell’s greatest times have been playing with his grandchildren. When he returned home from the football games, he would throw a football with his grandsons.

Another Edwards family tradition is to rent a house on a beach for a week in San Juan Capistrano.

“It has been so fun to see the kids grow through the years,” Grandpa LaVell says.

“The grandkids came to the BYU football games, and we go to their games as much as we can,” LaVell says. “But we’ve also been to harp and piano recitals.”

Grandpa and Grandma Edwards went to grandson Matthew’s Little League game, and afterwards some of the kids were asking LaVell for his autograph.

“Don’t you want his autograph?” someone asked Matthew.

And LaVell seems proud that his grandchildren feel that way.

He wants them to be a normal family, with everyone doing whatever they are most interested in.

“It really, truly makes no difference to me if my children and grandchildren play football,” LaVell says. And, like all things he says, it’s easy to believe him.

Although trying to read his face can be more difficult than reading the Cougar’s offense.

LaVell’s “poker face” doesn’t say much about what he really feels, LaVell says.

“I’ve had pictures taken of me when I wasn’t aware, and I still have that face — even when I’m golfing,” he says. “I look like a pretty mean guy.”

People have said to LaVell, “Smile. It’s not that bad.”

While Patti has been an ideal wife and mother to her accomplished husband and children, it hasn’t always been easy for her.

“I’ve never felt in competition with others,” she explains. “But sometimes I feel that I’m not recognized for my own contributions.”

And her turn in the sun seems to be coming. The couple’s 50th wedding anniversary is this year, and they plan to celebrate.

“My mom really, really likes my dad, and he always knows it,” Ann says of her parents’ marriage. “At the same time, she is fiery and not the least bit submissive.”

Football has added unique pressures to their strong marriage, but after the kids were raised, Patti started traveling with LaVell, which strengthened their relationship.

“Patti has done such a great job,” LaVell remarks. “Coaching is a demanding, tough profession. And I think it’s even tougher on the wives. But Patti has always been my greatest supporter through the years.”

Patti’s love for athletics was an acquired taste.

“She really didn’t know much about sports when we got married,” LaVell remembers. “Now, she is more of a fan than I am.”

Other than Patti, LaVell hesitates to name a best friend. His circle of friends has gone lone and wide, with the likes of Spike Dites, Ted Toller, Steve Young and others on the national scene.

“One thing I really have found enjoyable through the years is that I’ve had so many great friends in  situations other than football,” LaVell says. “I’ve had great times golfing and traveling without talking about football with people like Tom Osborne and Bobby Bowden.”

With thousands of past players and coaches in his memory bank, he is still able to recall faces and names.

“It’s amazing to me, but I can remember specific experiences about different individuals,” LaVell says. “It’s one of the enjoyable aspects of my job.”

“Long after the scores are forgotten, the associations I’ve had bring things into focus for me,” says LaVell.

LaVell has traveled the country with his BYU teams and his family, but he’s never felt the itch to move from Utah County.

“I think people generally like the place where they grew up, and I grew up right here in Orem,” LaVell says. “But this place is really special. Other than being scenic, I like the people and the pace of life here.”

And, he loves the influence of BYU.

“There is no better place to raise a family than in a city with a college atmosphere — and it’s not necessarily the athletics that make it great, but the quality of life that comes from being around all aspects of a school,” LaVell says. “I think Provo and BYU capture and create what makes Utah Valley great.”

This new season, like the last 29, will be the same in at least one way — same stew.

“Whenever I taste gameday stew, I think of being with my parents, my brothers, and our families in my mother’s kitchen, talking about that day’s game. This is a dear memory that will become dearer with time,” daughter Ann says. “But gameday stew never tastes the same whenever I fix it for my kids on a regular week night.”

This fall the Edwards will still be eating gameday stew together after the BYU football games — that is, if Patti and LaVell aren’t in the mission field.