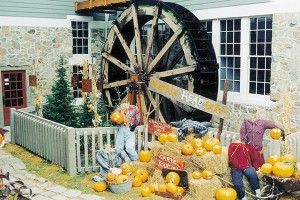 Halloween is the second biggest money-making holiday in Utah, with activities ranging from corn mazes to pumpkin patches.

Utah County may be Happy Valley, but we also enjoy other emotions — lost and scared.

Halloween is the second biggest economic holiday in Utah — just behind Christmas, according to Cydney Neil, director of Rocky Point Haunted House Productions.

And autumn activities that reap financial rewards are sown everything from corn mazes to pumpkin patches.

“In the beginning, we were just a bunch of college friends trying something that sounded like fun,” says Kamille Thorne, marketing director for The MAiZE. “So it’s safe to say that no one is more surprised at the ‘craze’ we’ve started than we are.”

While The MAiZE will be working with 60 mazes across the United States and Canada this year, the company started with just one maze in 1996. Since then, they’ve designed 102 mazes, including one in American Fork that was dubbed the world’s largest corn maze by the Guinness Book of World Records.

“In the past five years we’ve helped 650,000 directionally challenged maze-goers to get lost,” Thorne says.

This Utah County-born company has been featured in USA Today, Paul Harvey News and NBC Nightside.

The MAiZE has sparked interest around the country, but it has also brought many competitors here in Utah Valley.

Davis Farms began their fall business with a pumpkin patch, and they added a maze four years ago.

Bonnie Davis says their corn maze is “big enough to get lost in but small enough to have fun.” The four-acre maize is geared toward families, she says.

“We have people come from all ages,” Bonnie says. “The kids like to zip through the maze as fast as they can, and the teen-agers and adults like to go through for the challenge — they like to figure out the puzzle.”

Everyone has his or her reason for going through. But the reason generally isn’t for a violent scare.

“We don’t have any scary guys jumping out at you,” Bonnie says. “We don’t do anything bloody or gory, and I’ve had a lot of parents thank me for that because they want someplace safe and fun to bring children.”

Bonnie also notes that the pathways in the mazes are wide enough for wheelchairs and strollers.

Although the corn maze is popular, Bonnie’s joy comes in watching families pick out their Halloween pumpkin.

“It’s a lot more fun than picking pumpkins out at a grocery store,” she quips. “Little kids need something to do at Halloween time.”

And older kids like picking out their orange treasure, also. Residents from the Lindon Care Center come to the Davis Farms pumpkin patch to pick out their favorites.

“My absolute joy is when it comes to be selling time. I love the excitement when they find that perfect pumpkin and you hear the families shouting back and forth to each other,” she says. “That’s my reward, and this is what the work is all about.”