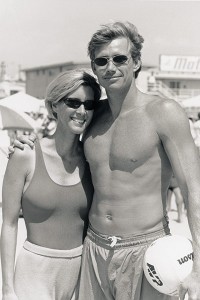 Troy and Desiree Tanner have traveled the world with Troy’s volleyball career. After winning gold in the Seoul Olympics with the national team, he played overseas for three seasons and then returned to where he fell in love with the game: the beach. His career earnings approach the half-million dollar mark.

When Provo resident Troy Tanner won Olympic gold on the men’s volleyball team in 1988, he knew he had accomplished something of enormous propensity. What he didn’t know is that his golden touch would extend to so many other things in life, including his family, his wife’s career and his simple happiness.

For years, Desiree Tanner traveled the world with her volleyball-playing husband, Troy. And now Troy takes care of their three children while Desiree makes business presentations around the country — including QVC appearances — as the product development specialist for Roberts Crafts.

But before the “scrapbooking days,” the Tanners were centered around Troy’s volleyball career. Soon after Troy won gold in Seoul with teammates Karch Karaly and Steve Timmons, Troy and Des got married. Within a few months they found out they were pregnant with twins.

“I had to make some choices because my priorities were changing. So I quit the national team and went to play overseas,” Troy says.

He played professional volleyball in Italy, Croatia and Japan. Des and the twin boys, and later daughter Bailey, went with him.

Troy points out the trials of living in Europe, while Des reminds him of the positive experiences.

“I was the only foreigner on the team, so they either loved me or blamed me, which helped me develop my volleyball skills,” Troy said. “Looking back, it was fun. But sometimes I felt bad that Des was in the apartment with the kids.”

But Des doesn’t feel sorry for herself.

“Oh, but we got to experience different cultures,” she reminds him.

“That’s true. Des made the most of wherever we were and made sure she had the ‘Japan experience,’ for example,” Troy said.

Japan wasn’t just a time for Troy and Des to learn and grow, but it was also a stepping stone for Carson and Riley, the now 10-year-old twins. The blond twin boys became successful child models.

“It was a great way for us to see the countryside as we went from modeling job to modeling job,” Des recalls.

The boys are no longer modeling, mostly by choice of Troy and Des. They are, however, modeling some of their  dad’s interests.

Published scrapbook pages show the twins at volleyball camps and with some of their favorite BYU volleyball players, as Troy is the assistant coach of the BYU men’s volleyball team. 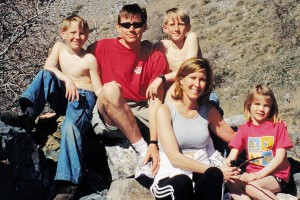 Californians at heart, the Tanners have now fallen in love with Utah. With their twin sons, Carson and Riley, and their daughter, Bailey, they hike through the mountains several times per week.

Although Troy’s volleyball days have spanned most of his 37 years, he doesn’t think of himself as a volleyball player.

“I think I get labeled a volleyball player, but the only time I think about my gold medal is if someone asks me about it or if I’m sending out a resume,” Troy says. “I didn’t grow up thinking about and planning for an Olympic gold medal. The doors just kept opening.”

In fact, when Troy thinks of volleyball now, his first thought isn’t of the glory or the rush of a good play.

“My knee hurts when I think about volleyball,” he says.

Troy plays in a few local events, but he participates more for social reasons than for the competition.

This isn’t exactly how Troy envisioned his life in his 30s. In fact, he didn’t plan to be a Utahn long-term.

“I thought I’d buzz up to Utah, get some coaching experience, get my master’s at BYU and then go back to San Clemente, Calif., where we still own a home,” he says. “What I didn’t plan on was falling in love with Utah.”

All five of the Tanners find ways to enjoy living in the Wasatch. 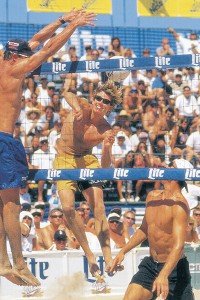 This photo of Troy Tanner was printed in the 1997 ESPN calendar, with the likes of tennis ace Pete Sampras, golf pro Phil Mickelson and shortstop Omar Vizquel. His scrapbooking wife, Desiree, has the calendar mounted in a family scrapbook under the headline “Calendar Boy.” Troy also did a Sunkist commercial during his prime pro-volleyball career.

“We hike these mountains almost every night,” Troy says.

Taking an evening stroll in the hills is as easy as walking out their front door, which opens out onto breathtaking views of Rock Canyon just above the Provo LDS temple.

“The only thing that’s better than these Utah mountains is the ocean,” Troy says.

For now, the Tanners are content enjoying their Utah home, careers and associations.

“I love my job, I love our house, and I love the area,” Des said. “I love to hear the thunder bounce off the mountain. We really couldn’t have a better life.”

It’s this positive outlook that has helped both Troy and Desiree succeed at their respective passions.

“I fell in love with scrapbooking when I was first introduced to it as a young child. I used wrapping paper and ribbons — things that now I know aren’t acid-free, safe products to use,” Desiree says.

Even though much of her life has been geared toward preserving memories in a creative way, she never imagined things getting “this big.”

“The first time someone asked for my autograph, I was so nervous I left an ‘n’ off of ‘Tanner,’” Des says. “People give me lots of response, especially through e-mail. They want to know where I get my ideas.”

Her original “big idea” was to start her own scrapbooking company, and she met with Robert Workman of Roberts Crafts. After seeing Des’ scrapbook pages, Robert asked Des to consult on their scrapbook line.

“I have the greatest job. I get to think of things that aren’t out there and improve upon what is out there,” Des says. “I enjoy seeing projects to fruition.”

Des has seen many projects from beginning to end in her three-plus years with Roberts Crafts, including traveling around the country to oversee displays and products.

Her latest venture includes the world of television, as she has appeared several times on QVC.

“It is the most exhilarating and most terrifying experience,” Des says. 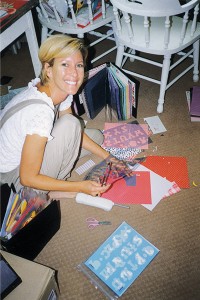 Desiree Tanner turned a life-long passion for scrapbooking into a profitable career. As the product development specialist for Roberts Crafts, she has appeared several times on QVC selling scrapbook supplies and has had two books published. “It’s the ultimate craft,” she says. “You never tire of looking at the faces of those you love.” Desiree’s scrapbooking room in her house has shelves full of scrapbooks she’s done for her children and husband. She’s also working on a “girlfriend scrapbook,” with pictures like this of herself and her many scrapbooking friends.

The QVC people are sticklers for clear communication. During one run-through, Desiree explained one product by saying there were six sheets with over 100 items on each.

But Des’ words have been a blessing in other ways. Des has two books: “Creating with Coluzzle,” which went to reprint after only four months, and “Best of the Best Scrapbook Ideas.” She is working on a third book and has opportunities for more. But, she says, “I don’t want to always be chasing the dollar. I’ve got to enjoy what I do.”

Desiree contributes to national scrapbook magazines regularly, and she was one of the top 25 scrapbookers featured in the 1999 Scrapbooking “Fall of Fame.”

Des includes many of her own scrapbook pages in her books, so the Tanners’ lives have become, in a way, open books to the scrapbooking world. Troy’s Best Defensive Player of 1997 award from AVP is sported in her “Best of the Best” book. And you can also learn that “Dad spiked a ball at the twins’ school volleyball assembly and broke the teacher’s fingers.”

Des has stacks of her scrapbooks, and yet she doesn’t take herself too seriously. “Anyone can scrapbook,” she says.

Before entering the scrapbook world as a professional, Desiree was “pretty much a momma.” She also spent some time in the mortgage and hospice fields. But she didn’t find as much fulfillment there as she does at her current career.

“Scrapbooking is a timeless craft,” she says with a deep smile. “I used to spend hours making crafts such as a Santa, and then after a couple of years I was sick of it. But I’ll never tire of looking at my children as babies, as toddlers, and riding their two-wheelers for the first time.”

“The scrapbooking craze is a natural progression of the excitement of genealogy and the focus on the family,” Des says. “Everything driving the industry has to do with family. It’s a very positive industry to be involved in.”

Troy has a front-row seat to the phenomenal growth of the industry.

“These women get very into their scrapbooking,” he says. “They get on Web sites and talk crafts, just as men get together and talk sports stats.”

“The timing of Des’ opportunities couldn’t have been better,” Troy said. “I could see the writing on the wall, and I knew my [beach volleyball] sponsors were going to extreme sports. And the money in playing volleyball was just gone overnight.” 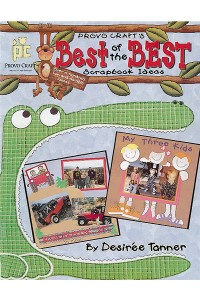 “Best of the Best” is one of Desiree’s two published books, and she is working on a third. Desiree has been named to the Scrapbooking Hall of Fame.

As he could see Des’ career take off, he said, “We decided to do a big shift — I would take care of the domestic things and she could go and do what she needed to do.”

Although Troy is at ease with the “Mr. Mom” stuff now, it was tough making the change.

“It took awhile for me to get used to, but the plants are alive,” he says with a chuckle. “The meals aren’t always great, but I do cook them.”

Troy uses “paradigm shift,” a term from his academic studies, to describe the change from playing hard-core volleyball to taking care of three kids and the house.

Des says Troy’s time with their children is a special gift.

“Most men aren’t lucky enough to build such strong relationships with their kids,” Des says. “I love coming home and seeing him playing catch with the boys.”

The Tanners believe their first chapter of success — volleyball — led to the second chapter — scrapbooking.

The Tanners are amazed at the ironic chain of events in their careers.

“We have taken turns, and things have been exactly the opposite,” Des said. “It’s a nice trade-off.”

They laugh about how things have come full circle. 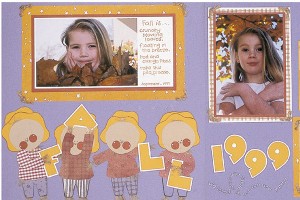 Desiree Tanner does scrapbook pages of her three children for nearly every holiday, happening and hairdo. “This is one of the few pages that hasn’t been published,” she said — until now.

“We can really enjoy each other because we understand both sides,” Des says. “We’ve both had a chance to run the household and a chance to provide for the family. Not everyone would enjoy what we’ve done, but we really see it as a blessing.”

They believe their positive attitudes and the love of what they do has led to success. And, of course, it never hurts to have the golden touch.