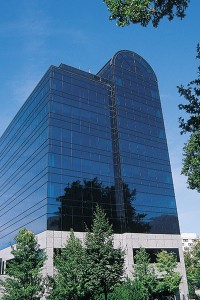 Getting on top of Utah Valley’s tallest buildings never occurred to me until after I had shelled out $8.50 to ride the seemingly supersonic elevators to the top floors of Chicago’s Sears Tower. As a tourist experience, Sears Tower was OK. But something seemed missing. The visit said nothing about the Chicago I had come to know.

To me, Chicago meant Wrigley Field on a weekday afternoon; a huge slice of Chicago-style pizza at Giordano’s; and a packed car on the elevated train with the November wind biting through four layers of clothing.

In contrast, Sears Tower offered just an antiseptic mass of corporate offices and law firms. Before I had even descended the 103 floors from the observation deck (Sears Tower actually has 110 floors and is 1,454 feet high), the idea had formed in my head that Utah County’s buildings offered more significance.

Thus began a strange odyssey that would take me into the nerve center of Novell’s worldwide network, on top of a tower of learning named for a short man with little formal post-secondary education, and below an upside-down Goofy driving a car on the office ceiling of Utah County’s ultimate entrepreneur. I left each building — Novell’s Building H, Brigham Young University’s Spencer W. Kimball Tower and Nu Skin Enterprises — feeling that I had caught a glimpse of Utah Valley’s essence, and its contradictions.

The bonus was I didn’t pay a cent for all those elevator rides. 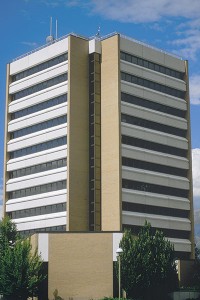 I arrive at BYU’s Kimball Tower just after 2:30 p.m. on the rarest of all days: There is virtually no one on campus. The crowds of Education Week have taken their RVs home and fall semester classes won’t start for another four days.

Construction on the 12-story Kimball Tower began in 1978, but it was delayed several times because of bad weather and seismic issues (in an earthquake, the spot where Provo’s tallest building stands would be near ground zero). At the building’s 1982 dedication ceremony, LDS Church President Spencer W. Kimball’s son, a BYU law professor, related a story about the time he told his father of the gossip going around campus.

“According to the story,” Edward Kimball said, “the (BYU) Board of Trustees said they would like to name a building after (President Kimball), and he said, ‘Well, brethren, I guess that would be all right, but please don’t make it a short building.’

Tammi Olsen, a BYU junior who is to serve as my guide, walks out of a small office to greet me. She’s quiet but reveals a wilder side: She and a group of friends got on the roof of the SWKT (in BYU parlance, pronounced SWI-kit) July 4 to watch Provo’s fireworks display. My interest is piqued, but before I can ask, we’re in an elevator heading up to the twelfth floor.

Once on top, I learn that BYU regularly brings campus visitors here to see the view from Provo’s highest occupiable floor. The view is accentuated because the building stands on a hill; that fact also gives the impression that the structure is taller than it is.

In any case, it’s tall enough for the university’s amateur radio club to use as a watch tower against red-blooded vandals every year in the week preceding the BYU-Utah football game.

I tune out further explanations and my mind fastens on the idea that the SWKT resembles Utah County in a metaphysical way. Some might say both are rather drab-looking from the outside. But inside each, brilliant people make discoveries, teach others and reach out to the world.

It’s a strange contradiction, almost reaching a community identity crisis. I’ve been around the county enough to know people don’t air their dirty laundry — or even clean laundry, if someone might think it’s dirty — in public.

That sometimes results in a hunker-down mentality, but I don’t see the need for it. Utah County has enough to be proud of to just be itself, regardless of what outsiders think.

Olsen’s voice brings me back to reality. Another thing the SWKT and Utah County apparently have in common is a healthy dose of romance.

“Lots of people have asked if they could come up here for a candlelight dinner on an anniversary or for a marriage proposal,” Tammi says. “We say, ‘No, but you can do it downstairs on the patio.’”

As I approach Nu Skin’s downtown Provo building, the first thing I notice is a huge female diver on the building’s north side. She’s about eight stories tall, and she appears ready to crash into Provo’s Center Street. To her side, an Olympic Games message reads, “Olympic Spirit. Gotta have it. Gotta show it.”

Nu Skin has it and is showing it, as I quickly see once I enter the building. At Nu Skin, the Olympics are everywhere: The company’s logo appears next to the familiar five rings on business cards and pins, and a newly remodeled lobby features a miniature Olympic museum.

Nu Skin likes to emphasize its Olympic sponsorship, especially with the company’s own distributors. It’s a motivational tool, and motivation is frequently needed in a business where success depends on evangelical zeal in selling personal-care products, Internet services and vitamin supplements.

Besides, for a $20 million Olympic sponsorship, why not toot your own horn a little bit?

Since shaking off government investigations of its marketing practices a decade ago, Nu Skin has been wildly successful, particularly in Asia.

Nu Skin and Utah County have some things in common: a strong work ethic and dislike of busybodies who poke their noses in where they don’t belong. But more than anything, what Nu Skin says about Utah Valley is entrepreneurship. People come up with novel ideas, and they work to turn those fantasies into something solid.

Of course, most Utah County entrepreneurs haven’t seen success quite like this.

My trip to the personal-care products Mecca includes stops on several floors, but the highlight comes when we reach the tenth floor, location of three incredibly lavish offices for top company executives.

“We’ve had executives from the East Coast and West Coast say this is some of the finest executive office space they’ve ever seen,” says Max Pinegar, a senior vice president who oversaw construction of the building a decade ago.

The décor of President and CEO Steve Lund’s office is straight out of a Washington, D.C., K Street law firm: A complete set of the Supreme Court Reporter lines the walls, and dark wood paneling abounds.

Meanwhile, the office of Blake M. Roney, chairman of the board, is serious yet playful. There’s Goofy, complete with painted yellow road lines on the ceiling.

Several original Norman Rockwell paintings decorate the walls, and one non-Rockwell painting shows Roney’s wife and child. But that one, viewable from Roney’s chair, can be raised at the push of a button and a television is revealed.

The office of Sandie N. Tillotson, an executive vice president, is almost impossible to describe.

Four minutes into my stay there, I still can’t formulate words for my notes. Multicolored carpet in wavy patterns. An abundance of green, purple and pink — on chairs, walls, everywhere. A huge makeup kit and a bathroom that takes up half the office.

I break myself away and ride down to the first floor. As I leave the building, I glance up one more time at the diver on the building’s outside glass. I think it would make a nice spot for messages.

“We get a lot of requests to put advertising on the building,” says John Petersen, director of community relations at Nu Skin. “We don’t do that.” 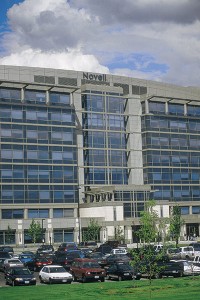 Walking toward Building H, I notice first the smell. On a bad day, the wind blows from the east and brings the odors of southeast Provo’s industrial zone. East Bay Business Park, where Novell is housed, was once a marshland and garbage pile.

Novell lawyers helped Provo draft and push legislation through the 2000 Utah Legislature aimed at allowing a nearby animal-rendering plant to relocate, so perhaps part of the smell soon will take care of itself. But more difficult than clearing the air surrounding Novell will be shaking off the image that the industry has passed the company by.

The super-wired Building H, just officially opened this year, is Utah County’s most stunning high-tech marvel. Miles of fiber-optic cable and tens of millions of dollars hide behind Building H’s secured doors. Yet, when sagging revenues caused layoffs of about 450 Utah County employees of Novell in September, Building H lost some of its luster.

Why build a $90 million, specialized building, and then have portions of it sit empty? Actually, there is precedent. Think Micron Technology. In the wake of recent setbacks, Novell executives vow the company will step up efforts to market its software and will remain viable.
Utah Valley may be a miniature Silicon Valley, but that distinction also carries with it the layoffs, the shutdowns and the buyouts of the rough-and-tumble technology world. I always thought it strange that Utah County, such a traditional place in so many ways, jockeys to be on the cutting edge of the world’s business future.

Cutting edge would be a good way to describe Novell’s Global Network Operations Center, housed on the first floor of Building H. It seems to me a giant war room. A huge video wall with a map of the world dominates the room, and troubleshooters sit at terminals and face the video screen. When there’s a problem on an internal Novell network somewhere in the world, the map indicates the location while experts scramble to fix it.

The process is so fascinating I can’t pull myself away. After watching for 20 minutes, I ask if I can go inside and sit among the troubleshooters, reputed to be the hottest network administrators anywhere. When I get in there and listen to the incoming calls and outgoing advice, I am struck by the thought that Novell, as the symbolic successor of Signetics, WordPerfect and Corel, represents Utah County’s high-tech bent.

It’s clear that economic survival in the high-tech world is not easy. But with hundreds of start-up companies whose founders cut their teeth at WordPerfect and Novell, Utah County seems determined. I guess that reflects the education and foresight of the people who live here. They farmed the land in the 19th century, sustained themselves on income from a steel plant through much of the 20th century and don’t want to go backward in the 21st century.

Having seen Utah County from inside its buildings, I don’t think backtracking will be much of a problem. I am a little worried, though, about this building metaphor going too far.

After all, isn’t that Utah’s first Krispy Kreme store going up on University Parkway?