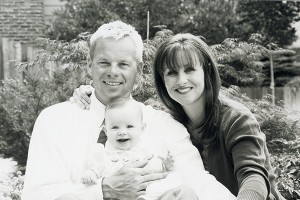 Orem’s Suzanne Sawyer Montgomery has been featured in the past seven Warren Miller Ski Films.

Ever since she was a10-year-old in pig-tails, Orem’s Suzanne Sawyer Montgomery has enjoyed the rush that comes from winding her way down extreme mountain ski slopes. Like an avalanche tumbling down the hillside over rocks, trees and hills, nothing has stood in her way. And the rush associated with extreme skiing has always fulfilled Suzanne’s need for speed.

Suzanne, who has appeared in the last seven Warren Miller ski movies, including last year’s film, “Fifty,” and who also models her good looks and expert skiing for the likes of Evian, Fila, Nordica, K2 and Rossignol, is taking a brief hiatus from the rush of “getting vertical” in exchange for the rush that comes from motherhood.

Narrowly missing having a “millennial” baby, Suzanne and Jeff, her husband of three years, became parents in January 2000 with the birth of daughter Mia.

Like the fluffy white mountain snow melting into spring that puts skiing on hold for a time, Suzanne is entering a new season in her life.

“Mia is the most important thing in my life now. Skiing has had to take a backseat. I only went skiing three times last year, and I didn’t miss it at all,” Suzanne says. “My priorities have definitely changed. I love being able to work at home and spend lots of time playing with Mia.”

But Suzanne’s skiing seasons are far from over. She still expects to be a life-long skier and perhaps return to the big screen and glossy magazine ads — but for now the pace has slowed — or in some cases, sped up — to the pace of raising a child.

Suzanne says she will always ski for fun with family and friends, but instead of “ripping up the mountain,” she will probably downshift to recreational skiing.

“I look forward to skiing as a family activity versus promoting myself. I’m entering a new season in my life,” Suzanne says. “I’m glad I’ve done what I’ve done over the past 15 years, and I hope I’m always venturing out in new directions — I even took up snowboarding a few years ago.”

Suzanne, who graduated from Orem High School in 1984, came into her passion early in life.

“I remember when I was 10 years old, my parents took me to Snowbird one weekend. Immediately I was connected with skiing,” Suzanne recalls.

At the age of 14, Suzanne became the youngest employed ski instructor at Sundance Ski Resort. Suzanne continued to perfect her shooshing skills as she coached the Sundance Alpine Racing Team and skied for the Utah Valley Ski Team during high school.

From 1984 to 1987 Suzanne took her skiing talents to the BYU ski team, helping them to a team NCAA National Championship in 1985 in Killington, Vt.

Ironically, winning first-place ribbons and national championships isn’t what has earned Suzanne’s skiing immortality. Her flair and photogenic nature sped up her career faster than her diamond runs.

“Sometimes it’s not how fast you can get down the mountain, but how you present yourself,” Suzanne says. “Take a skier like Tommy Moe — he’s very fast, but might not win many style points. I think I have a knack for skiing well for the camera.”

Since then Suzanne has traveled to the likes of the British Isles, Italy and British Columbia showing off her skiing talents for Warren Miller Films.

“I think one reason Warren Miller likes to use me is that I’m like all the everyday skiers out there,” she says. “I have a real job, and I live for the weekends. I like to ski more for the camaraderie and social side of it. I’m not like those skiers who spend six hours a day training.”

In fact, Suzanne’s “real job” is as a leadership consultant for Franklin Covey.

“I connect with the rest of the population who work all week, then spend their paycheck on weekend skiing,” Suzanne says.

This “everyday” skier has made a living with ski modeling and filming, but she wouldn’t call it a get-rich-quick career.

“There’s not much money in the ski industry,” she laments. “And what I’ve found is if I don’t do the ski shoots, someone else will.”

While she may be replaceable as a ski model, her new career of motherhood offers job security.

“I’d love to have another baby or two,” Suzanne says. “But I also love the ski industry. I’ll find a way to make time for both, I’m sure.”

Suzanne’s ideas for her new balancing act include perhaps working for the Olympic Committee or teaching skiing. But her Olympic involvement won’t be in front of the camera.

“I don’t see me being too involved in the competitive side of the Olympics — not unless they start extreme skiing as an Olympic event,” she smiles.

Suzanne’s open mind about her future makes each new challenge a thrill.

With working, motherhood, volunteer work and maintaining a career in the ski industry, Suzanne has a full schedule. But each new season in her life brings unexpected twists and new “runs.”

Whether she’s conquering a mountain or teaching Mia basic skills  — Suzanne will be up for the challenge and the rush of what lies in the future.