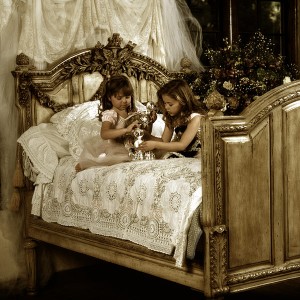 Marty Ricks, owner of Krieger-Ricks in Springville, designed this bed for his daughter. His nationally-known designs are now on display in his first Utah showroom, located on State Street in Springville.

When Springville City Council member Marty Ricks was a teen-ager in Rexburg, Idaho, he carved frames for his father’s impressionistic artwork.

Ricks gained an appreciation for period design through his study of frames — in fact, a history of picture frames still lies open on his desk today.

His frames became popular with other artists, and he began doing work in Jackson, Wy., as well as around the Snake River Valley. His framing business naturally expanded to putting mirrors within the frames. From there, a natural transition was to furniture and other home accessories.

And the most recent transition includes a brand-new showroom in Springville, showcasing the high-end designs the Krieger-Ricks name has come to represent.

“Up until now, our business really hasn’t been Utah,” says Marty Ricks, founder and president of Krieger-Ricks.

However, as the furniture and designs were well-received nationally, and bought by many prominent businesses and individuals — and by the LDS Church for use in temples around the world — Ricks began thinking of bringing his work to a Utah audience.

“I am dedicated to the idea of Springville as ‘Art City,’  and I began thinking “What can I do?’” Ricks says.

The company’s high-end furnishings seemed, in a way, more suited to a metropolitan market.

“But I decided that rather than move to Salt Lake City, I would stay here in Springville,” Ricks says. “I think if what we offer is special enough, people will enjoy traveling down to a small city.”

Ricks has a vision for making his factory and showroom a renaissance of thinking about art and artists in the valley.

“I want to bring in other artists and almost create a strip mall of art vendors,” Ricks says. “We’d like Springville to be the blue collar art center — where art is really made and appreciated.”

While some might say the town of Springville is not the first place they’d think of for a high-end furniture and design showroom, Ricks believes he’s just slightly ahead of his time.

“I think Utah County is going to continue to be a wealth center. In 20 years, it will be what Los Angeles was 20 years ago — and I want Springville to be the La Hoya of the Wasatch.”

While Ricks and others in the Springville community are helping add to the “Art City” image, they realize the designation isn’t just a given.

“We’re going to have to create the type of community we want,” Ricks explains. “It won’t just happen. And I want to do my part in creating and adding to this art community.”

The new showroom, which opened in December 2000, includes high-polished furniture, as well as period pieces and a sample of the architectural designs the 30-plus employees of Krieger-Ricks can create via computer.

Ricks uses a technological process he created to help clients visualize the designs in their home, which is cost-effective for both buyer and seller.

And now Ricks is experiencing the high point of his life.

“To go from growing up in Idaho to being a major contributor in world-class renaissance design is incredible,” Ricks smiles.

This incredible venture that started with framing is now only 30 percent based on framing art; another 30 percent is mirrors and 30 percent of the business is furniture. The remaining 10 percent of Krieger-Ricks’ business comes from the architectural design side, which they believe is going to grow substantially as clients are informed on the options. 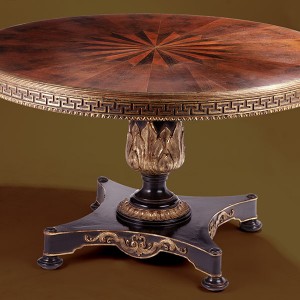 Krieger-Ricks, nationally known for its frames, mirrors, and furnishings, recently opened its first Utah showroom in Springville. Marty Ricks, owner, is eager to add his offerings to the “Art City” distinction. Krieger-Ricks customers can buy furnishings or have their homes architecturally designed.

As a business owner, Ricks’ most rewarding accomplishment isn’t the bottomline.

“The most satisfying thing is to bring together people of similar talents and create an environment where they can  do what they do best,” Ricks says.

Those who work with Ricks can sense this goal.

“To watch Marty work is inspiring because he is passionate about what he does,” says Mike Jacklin, vice president of sales and marketing. “His attitude dissipates over the whole operation.”

For example, when the finishers make a mistake, they immediately fix it because they know a mistake won’t be acceptable.

“Our employees begin to expect perfection of themselves because of the positive energy here,” Jacklin says.