Selecting a physician can be overwhelming. Many insurance companies require seeing a doctor in their network. Then there are specialties to consider.  Advertising adds another dimension to selecting a doctor. And then there is cost, location and availability. The decision quickly becomes complicated.

Perhaps one of the best ways to select a doctor is to get a recommendation from another doctor. Which is what we asked for.

We sent forms to hundreds of doctors in the valley asking them to name which doctors they would recommend to family and friends. We selected three doctors who received the most nominations to feature in this issue.

Of course, it is impossible to name the “best doctors” in the area, but here are three worth noting. Perhaps the most interesting part of our survey was the high number of doctors who received nominations, which means we have a vast array of esteemed physicians in the area from which to choose. 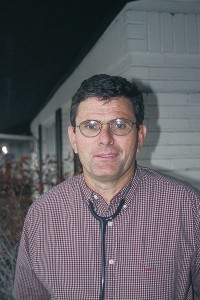 Dr. Henry Yeates has all the earmarks of a veteran Utah County physician. He sits rigidly in a chair with a stethoscope pinched around his neck and a look of intensity in his eyes. However, one only need speak with Dr. Yeates for a few moments before discovering that behind his cool exterior he has a very soft spot in his heart for others.

“I wanted to be a historian, but I couldn’t write. Being a doctor has been a good thing for me and for my family,” Dr. Yeates says. “I enjoy watching people get better. Having better lifestyles. I really enjoy watching people overcome their medical problems and return to those things they love to do.”

One example of someone turning their life around is a young Utah Valley gymnast named Holly Webster, who Dr. Yeates has been treating for the past several years. While it is true that Holly suffers from asthma, with the help of Dr. Yeates she has regained control of her breathing and is currently a state champion gymnast for her age bracket.

Holly recently wrote a book about her dealings with Dr. Yeates titled, “Asthma Can’t Stop Me.” 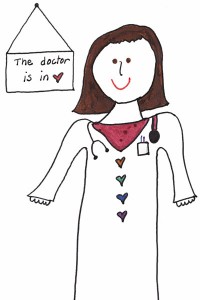 In the book she writes, “My … dream is to become a doctor, just like (Dr. Yeates). I want to help people with asthma. …Dr. Yeates has taught me how to be a good doctor because he cares about all of me, not just about my lungs. He always asks about gymnastics and how my competitions went. He cares if I feel well or if I am sick. Dr. Yeates and his staff really like it when my lungs are clear and I don’t feel ill at all.”

It’s clear Dr. Yeates feels a sense of eagerness that his patients are treated and overcome their problems.

“When I see people like Holly overcoming asthma and I know that I’ve been able to help … I think that maybe the things I do with my life are worthwhile,” Dr. Yeates said.

Dr. Yeates has worked with the Lung Association to establish asthma camps around Utah.

Dr. Yeates is a native of Salt Lake City. He attended Highland High School, the University of Utah, Creighton Medical School and University of California-Irvine. He is married to Bonnie and together they have eight children. 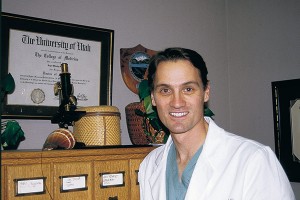 “Variety” is the word that best describes Dr. Clark Sheffield, and it shows in his choice of profession as a general surgeon and in the way he’s lived his life.

“I love what I do because I’m helping people in an un-mundane way. One day I might be taking out an appendix, the next — working on a hernia — the next day — operating on a gallbladder or breast cancer. Each operation I perform is a little bit different,” says Dr. Sheffield.

Dr. Sheffield’s thirst for new experiences also shows in his personal life as he has lived in or visited places like the Philippines, India, China, south-side Chicago, Japan, San Francisco, Peru, England and New Port, Rhode Island. “My wife and I both like to travel,” says Dr. Sheffield as he holds up his latest copy of “Wilderness Travel 2001.”

Dr. Sheffield was not always so enthusiastic about medicine.

“My high school classmates would have never guessed that I would go into medicine. I was scared of hospitals growing up. During drivers ed classes I was the one most likely to pass-out during some of those films they show you,” says Dr. Sheffield. “But now I’m used to it.”

Growing up with a fear of hospitals and medical procedures does allow Dr. Sheffield to be “extremely empathic” towards people who struggle with some of the things that go on in surgery.

Dr. Sheffield is a native of Provo. He attended Provo and Timpview High Schools, BYU and the University of Utah before joining the Navy to finish his medical training.

He is married to Polly and together they have four children. 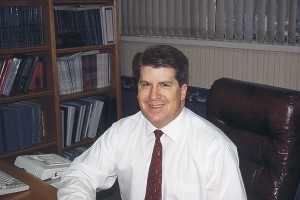 Other than helping people overcome skin cancer, Dr. Brian Bradshaw says he gets the most enjoyment from his job by watching the change in people.

“I’ll see a lot of young people come in with acne problems, and I can relate because I had skin problems growing up,” says Dr. Bradshaw. “There are better treatments available today compared to when I was growing up. I love to see the change in someone’s personality after we have cleared their skin.”

Dr. Bradshaw says that Utahns especially must pay attention to their skin.

“Utah has a very fair-skinned population and when you couple that with the intense sunshine we get and our high altitude you’re bound to have higher skin cancer rates,” says Dr. Bradshaw. He encourages people who suspect they may have a skin disease to not delay seeing a doctor. “See your doctor. If you have a non-healing sore or a a mole that’s changing, don’t waste time. The sooner you see your doctor the better.”

Dr. Bradshaw says medicine was a great career choice for him.

“I know it sounds canned, but I just love to help other people. I love to see them gain self-confidence,” says Dr. Bradshaw. “I find what I do very satisfying. I’m surrounded by great doctors, and it helps when I’m able to consult with them.”

Dr. Bradshaw, like Dr. Sheffield, is a native of Provo and attended Provo and Timpview High Schools, BYU and the University of Utah before joining the Navy to finish his medical training.

He is married to Kristine and together they have five children.