Home Life Home and Garden Rooms with a View: 12,500-Square-Foot Hobblecreek Canyon Home Matches the Beauty of its Setting

Rooms with a View: 12,500-Square-Foot Hobblecreek Canyon Home Matches the Beauty of its Setting 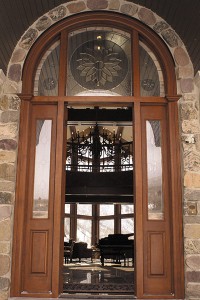 The round glasswork above the entryway to the Hobblecreek home of Bill and Margaret Pope was originally made as a spare for the San Diego Temple. When none of the 24 circles used in the temple broke, the glassmaker sold the extra piece to the Popes.

Springville’s Bill and Margaret Pope have given most of their lives to building up causes and communities they believe in. UVSC even has a “Bill J. Pope Science Building,” named for the million-dollar donation from the  Popes.

But when the Popes sold a large portion of their company, U.S. Synthetics Corporation, Margaret told Bill that she wanted something.

“I wanted a house for my family to gather in,” Margaret explained.

So they found a 50-acre parcel up Hobblecreek Canyon, next door to one of their four children, and began the 18-month journey of building their 12,500-square-foot dream home.

“We’ve designed this to be a four-generation home,” Margaret says. “We see our grandkids lots more now that we have a place where there are things for them to do and enjoy.”

Options include tennis, hiking, enjoying the scenery and playing sports on the four acres of nothing but grass.

And that’s just the outside. The interior of the home, built by L&T Construction, includes seven spacious bedrooms, each with its own bathroom. 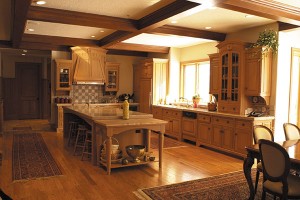 The warmth of the Popes’ main-level kitchen is created with exposed beams on the ceiling and cherry wood stained with a light stain. “Our decorator suggested the lighter finish to give a less formal look to the room,” Margaret Pope says.

“These bathrooms are bigger than the ones our grandkids have at home,” Margaret jokes. “We love to have people stay with us and enjoy our home.”

The multi-million-dollar home, now 18 months old, was not stressful to build, Margaret says.

“Bill told me we could build the home if I would oversee it,” she says. “Building a home from scratch is one of the most exciting things you can ever do.”

Margaret took that attitude to heart. During the construction months, Margaret came to the job site nearly every day. She spent a couple hours at the site reviewing, discussing and planning with the contractors. Then she would often spend an additional five hours per day working on selecting flooring, meeting with designers and researching the next phase. 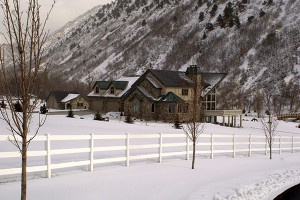 “It was a full-time job,” Margaret says.

The home, which easily ranks among the most impressive in the county, also was a full-time job for area contractors. Margaret has a list of more than 80 companies who participated in making her home unique, beautiful and functional. 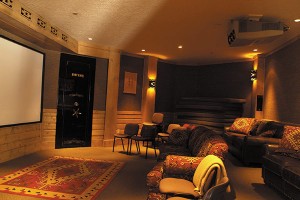 The Pope family gathers in the basement media room to watch LDS General Conference together, as well as other events. “Our grandkids love to bring friends out here to watch movies,” Margaret says. Consistent with the feel in the rest of the house, this classy room is also kid-friendly, with a bucket of toys in the corner for the little ones. 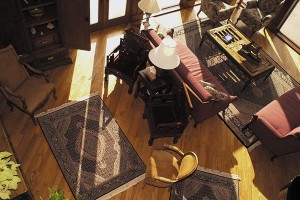 The table in the formal sitting area was created from a 16th century door from a Spanish prison. The statue atop the authentic table is of the two teen girls who saved the manuscripts from being burned in Nauvoo. “We want our grandkids to see that you can be a hero at age 13,” Margaret says.