Home Things To Do Events Behind the Storytelling Festival

Behind the Storytelling Festival 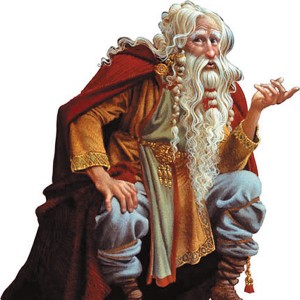 It’s a cross between a quilting bee and a meeting of NBC executives.

Amidst the Ashton’s many oil paintings, grand pianos and antiques is a laid back powerhouse meeting of women with a purpose and a mission.

Mission: plan, coordinate, present, and evaluate one of the premier storytelling festivals in the country with no paid employees, no prior experience in the storytelling world, and without neglecting their families and other obligations.

Mission impossible? Not for these dedicated volunteers.

The women trickle into the morning meeting and find a seat in Karen’s comfortable living room.

Without getting up, Karen introduces herself to the new people and thanks everyone for coming. This is a comfortable executive board.

“We want to announce that Krispy Kreme has come on as a sponsor,” Karen announces with a big smile. The women are thrilled. The festival is more than an event to them. This is a part of who they are.

What started out as wives of WordPerfect employees has grown to husbands, friends and neighbors of the original eight people who put on the first festival. Now this volunteer effort is “addicting.”

“The only way off of this board is to move or die,” says board member Janet Lowe, who is only partly kidding.

These board members are passionate, community-driven professional volunteers. Between all of them, they have contacts in every neighborhood, industry and organization. If someone in the group brings up a name, at least one other person also knows him or her.

And they are focused on their mission to bring storytelling to Utah Valley.

Just as Alan Ashton shaped our community with technology and economic bursts with his founding of WordPerfect, his wife, Karen, has brought refinement, beauty and education to our county. The Ashton’s Thanksgiving Point offers blooms and beauty. Karen’s Timpanogos Storytelling Festival offers insight, perspective and literacy.

Karen has given money, time and her home to this effort she believes in. And she’s developed a loyal following. 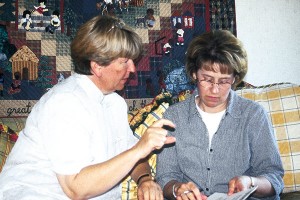 “Karen has made this a fun thing for all of us,” says Karen Acerton, vice president of the Timpanogos Storytelling Festival.

Tradition has it that Karen Ashton, with a little help from Thanksgiving Point catering, feeds the volunteer board lunch afterward. But the free food is not the biggest perk of this volunteer effort.

“People want to align themselves with success,” says Carla Morris, who represents Provo Library on the board. “They want to be part of a movement that is positive and important.”

While many of the women knew Karen Ashton before working on the festival, some have come to know her through the event.

“We believe in Karen’s leadership,” says Rosemarie Howard, historian for the festival. “We’ll do whatever it takes to make her vision for this festival come true. We have a huge loyalty to Karen.”

The first year, the volunteers weren’t clear themselves on what the festival would be like.

“We weren’t even sure in the beginning what it was we were putting together. Here we were working with the press on stories we weren’t sure of ourselves,” says Karen Acerton. “But Karen (Ashton) knew what it was she wanted.”

Now they can all visualize the event perfectly, with a few minor adjustments  year after year. 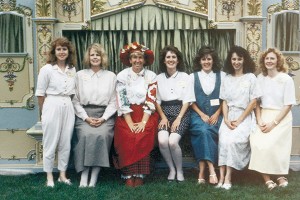 Karen Ashton (in the red hat) headed up the first Timpanogos Storytelling Festival in 1989 with a handful of volunteers, of which most are still on the board today for their 12th annual event.

EVOLUTION OF THE FESTIVAL

Now in its 12th year, the Timpanogos Storytelling Festival draws nearly 20,000 people, including 3,000 schoolchildren. This is equivalent to the entire city of Spanish Fork attending.

This is no small event, although it had humble beginnings.

The first few years, the Timpanogos Storytelling Festival was held at the Ashton’s Orem home.

“I think the only people who came the first year either had a free ticket or family involved,” Karen Ashton says.

The volunteers brought their children with them to the Ashtons, where they stayed in the magical playroom, which includes a painted dragon and a fireman pole.

Now the festival spans several venues, with the main location being the Olmstead, at the mouth of Provo Canyon.
This annual event has quickly been recognized as one of the best of its kind in the nation — partly because of the strong volunteer effort in the county.

“We really have to give credit  to the volunteers,” says Jennifer Nelson, board member who coordinates hosting. “We get everyone from the Boy Scouts to the Kiwanis helping us out.” 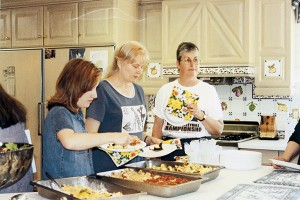 To find ways to improve the storytelling festival, members of Orem’s executive board travel to different festivals around the country to get ideas and learn from other people.

But when they get there, people are asking them questions.

“Here in Orem we’re just moms, but when we attend these other storytelling festivals, we’re celebrities,” Jennifer says. “This Orem festival has become known as one of the best.”

Storytellers want to come to the Timpanogos Festival. Storytellers are treated royally, with high-class accommodations, food and hosting. Other festivals lack the volunteer effort that makes this Orem event so well-done.

The Ashtons also help the tellers have an enjoyable stay. This year, they’re taking one of the tellers with them to Lake Powell for a quick vacation. 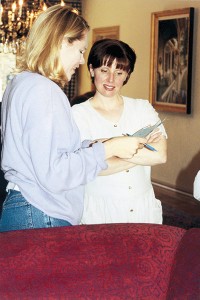 Stephanie Raff and Tamra Pratt discuss details of the 12th annual Timpanogos Storytelling Festival, which is put on entirely by volunteers.

These volunteers would do anything to make the festival more successful.

A Stephen Covey seminar would be wasted on these women. Motivation is simply not a problem.

“We’ve had good laughs, and we’ve had good cries,” says Karen Acerton. There is something about this project that brings these same volunteers — along with a few more friends — back year after year.

“Each year we wonder if we can do it again next year, but it’s become so much a part of our routine that we just keep doing it,” Karen Acerton says.

For Janet, the festival’s reach extended to her in-laws, who both passed away within the past year.

Janet’s father-in-law, a physicist, was intrigued that her approach to the storytelling festival was not so much scientific as it was personal and emotional.

This man who had blocked out his childhood began to tape stories, get his wife to tape stories and give suggested titles. The grandkids at his viewing said, “I didn’t know Grandpa until about eight years ago when he began telling us stories.”

The volunteers want their families to benefit from the power of storytelling.

“We love bringing our children after we’ve spent months preparing for the festival,” Karen Acerton says. She remembers one particular year she brought her kids to a rainy festival night. “We were all snuggled under a blanket, and it was such a memory for us.”

The reasons for staying involved are as varied as the participants.

“This has saved me countless money in therapy!” jokes Debi Richan.

The festival is therapy for these volunteers who have gifts to share and a community to improve. 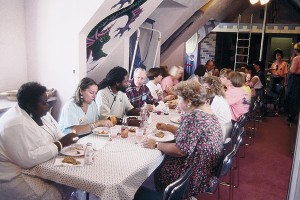 The Timpanogos Storytelling Festival was held at the Ashton’s Orem home for the first few years. Here are the storytellers enjoying lunch with the volunteers in the Ashton’s upstairs playroom.

AND THE HUSBANDS FOLLOWED

Initially, the volunteers had a difficult time convincing their husbands to help with a storytelling festival.

“My husband said, ‘I’ll help you, but it sounds stupid,’” Jennifer relates.

Carla says her husband brought a book the first year, thinking that he’d have to entertain himself.

“After the storytelling got going, he put his book down,” Carla says.

The husbands no longer bring books and bad attitudes. In fact, most of the spouses of the volunteers put on a nametag and join the volunteer effort.

Dale Burns, coordinator of transportation, puts her husband to work driving shuttles during the festival.

AND LIFE GOES ON

Although these women are unpaid, the ups and downs of life don’t stop them from participating.

Not even pregnancy and nursing are reasons to take a break.

Janet, who’ll have a new baby with her at this year’s festival, is old hat at combining newborns with storytelling. Seven years ago, three board members had babies within weeks before the festival.

“We hired someone to come to the festival and sit with the babies,” Janet remembers. “We had two-way radios so we could check on them and see when they needed us to come feed them.”

Members of the board change their roles as their family life changes. Those who have babies, for example, might take on a lower profile position. Rotating duties also cuts down on burnout. 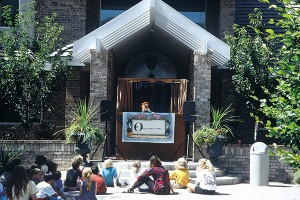 IT’S ALL ABOUT THE STORIES

While everyone loves a good cause, these women are not casual about storytelling.

“We all have a story, and it connects us,” Rosemarie says. “It is the oldest form of communication we have. Storytellers are the keepers of history, lineage and cultural beliefs.”

Rosemarie is writing a history of the festival, and she uses a kaleidoscope as a metaphor to describe the event.

“We all work hard on our aspect of the festival, and we add to the color. Then when we turn the kaleidoscope, the picture changes.”

Stories are important to board member Lakshmi Johal-Dominguez, as she raised her two children without the help of TV.

“For me, storytelling is passing the gift of magic,” Lakshmi says. “Television requires no imagination, but stories bring ideas alive, and that is a legacy worth passing on.”

Janet says the festival opens up the storyteller in each of us.

“On the way home from the festival, kids will hear their parents tell them stories that help them understand who their parents are,” she says. “In a world where we have all these problems, this festival breeds hope.”

The festival brings people together regardless of politics, education, age or religion.

“There is nothing else that brings people together like this,” Janet says.

“We bring in a wide variety of tellers, including ethnicity that we lack in our community,” Karen Acerton says.

After completing their “mission possible,” these volunteers are worn out and tired. They always talk about having a slumber party after the festival is over.

It hasn’t happened yet.

Maybe they need Krispy Kreme to sponsor their sleepover.