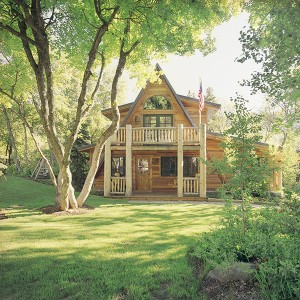 This Sundance cabin was originally shown in the mid ’60s at a California State Fair. After the fair was over, the cabin was disassembled and relocated in its current location just a few minutes walk from Sundance Ski Resort.

Many of us dream about it — buying an old cabin in the woods and remodeling it into a modern mountain home — all-the-while maintaining the rustic subtleties that preserve that distinguished old West feeling.

In reality, that’s just what the Dallin family did.

“I would go home at night and lay in bed and dream of what this cabin could become,” says Ron Dallin, one of the owners of the home who masterminded the remodeling. “Putting this home together was a work of love. I would think of ideas and people would tell me that it couldn’t be done.” But with some skillful engineering and hard work, Ron’s dream became a 2200-square-foot redwood reality.

While Ron is hesitant to put a monetary value on the home that he created, he points out that he “wouldn’t sell the property for $1 million. Maybe a million and a half,” he jokes of the cabin just up the road from Sundance Ski Resort. 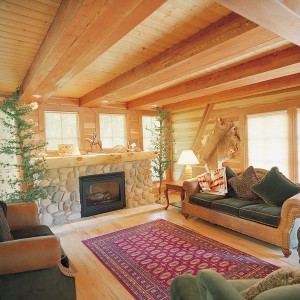 World-famous sculpturer Cyrus E. Dallin’s bronze statue, Appeal to the Great Spirit, is the focal point of this gathering area. The plaster cast that created the statue was formed in 1912. The sculpture has special meaning to Ron and his family as Cyrus is a distant relative.

Obviously, the Dallin families use the cabin as a retreat from the every-day pressures of work and business. But Ron, who is involved in the new Gold’s Gym in Spanish Fork and the new Gold’s Gym and tennis club in Orem, also uses the cabin as a place to work. “I was adding it up in my mind the other day and I probably spend 20 to 25 full days up here a year. I love to plant the flowers. Just the other day I was offered a game of golf and I turned it down to come up here and plant flowers.”

A variety of trees, shrubs, flowers, a huge lawn and many different species of wildlife serve as an appetizing compliment to the cabin. 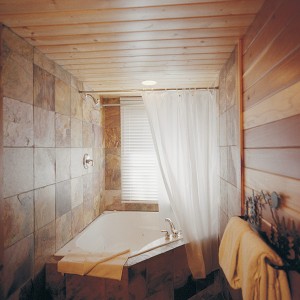 Just because you’re roughing it in the great outdoors doesn’t mean you have to do without the bare necessities — like a corner jetted tub!

The property is lined with a variety of trees, including quaking aspen, Colorado spruce, hardwood maple and douglas fir. Flowers and shrubs like bishop’s weed, Colorado columbine, pansies, and yellow snapdragons also add to the overall effect of the landscape.

On occasion, the Dallins have spotted or heard many different types of wildlife, including cougars, deer, elk, moose, raccoons, eagles, hawks, owls and coyotes.

Two elements that help the Sundance cabin maintain that Rocky Mountain, old West style are the Western-style lighting fixtures and the sculptures of Springville’s late Cyrus Edwin Dallin, a relative of Ron Dallin.

Cyrus Edwin Dallin was born in 1861 in Springville. After studying at the sculpture school of T.H. Bartlett in Boston, Cyrus went on to create amazing sculptures, many of which portray the old West.

The home’s lighting needs were met by Ironwood Industries in Orem. Most of the lights in the home are reminiscent of mountaineer life. The lights consist largely of stretched cow-hide and shaped metal. 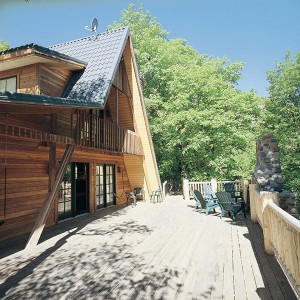 In addition to the 2200-square-foot home, the Sundance cabin also boasts an additional 2200 square feet of decking. 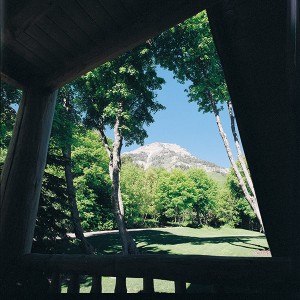 This view of Timpanogos is enjoyed from the front step. Visitors, especially those from outside the Intermountain West, are amazed at the majesty of the Wasatch Front. 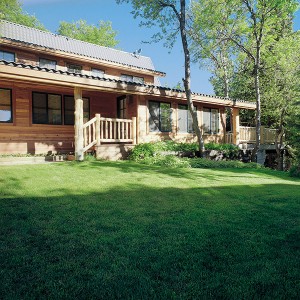 A vast lawn and extensive landscape make the Dallin’s cabin unique in the Sundance area.
Because the Dallins have cleared away many of the native trees and replaced the west side of their lot with grass, the cabin has some of the best views of Timpanogos of any of the Sundance cabins. The large area of grass is also perfect for large gatherings, such as wedding receptions. 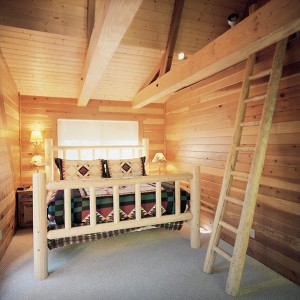 One of two bedrooms on the second floor of the cabin. Both bedrooms include king-sized beds, TVs, walk-out decks and lofts perfect for a children’s hide-away. 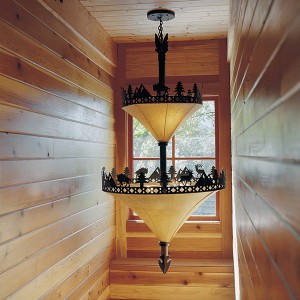 This handsome light from Ironwood Industries adds style and substance to the stairway leading from the main floor to the second floor of the cabin. 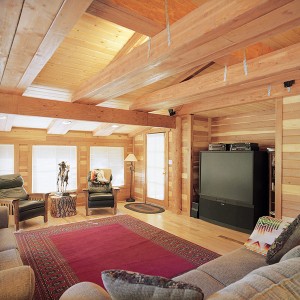 This room, complete with 61-inch TV and Bose surround sound, is a favorite gathering place for the Dallin family, especially during BYU football games. This room is a good example of how this Sundance property has maintained the past without sacrificing the future.