Home News Celebrity Engemanns are a Family Fit for a King

Engemanns are a Family Fit for a King 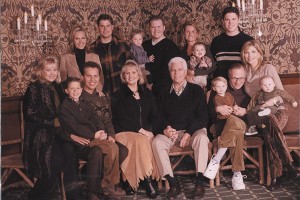 Karl and Gerri Engemann, along with their five children, one son-in-law (Larry King), two daughters-in-law and six grandchildren.

The Engemanns were well-known before Larry King joined the family.

Although they’ve lived in the Edgemont area of Provo for 20 years, their talents in the entertainment industry have taken them around the world.

Karl Engemann was vice president of Capitol Records and now is Marie Osmond’s manager. Karl’s brother Bob sang with The Lettermen in the ‘60s.

Gerri Engemann was a vocal contractor in Hollywood working with all the major artists of the time and is now recording her own CD, with music ranging from spiritual to blues.

Their five children are also widely accomplished, leading some to call the Engemanns “Provo royalty.”

But this is a misconception the family is eager to clear up.

“We’re just everyday people who play together, pray together and worry together,” Gerri says.

In fact, Gerri sounds like a true mother when she says, “I’m only as happy as my saddest child.”

Luckily, her children have all found happiness in their respective careers and pursuits.

Paul Engemann has had two hit records and currently owns his own interior design company, Austin-Go-Bostin, which did the interior design for Larry and Shawn King’s homes in Beverly Hills and Provo.

Shawn Southwick-King has had a full acting, singing and television career, and now works alongside her husband in a variety of charitable organizations.

Shannon Engemann, who lives in Salt Lake City, has acted in numerous motion pictures, including “Brigham City,” and does extensive television work, consulting and national commercials. She is a former Miss Provo. She has modeled on both coasts, but prefers to live in Utah.

Ryan Engemann played football for the University of Utah and now lives in Provo with his wife and their two children. He works for a computer company.

Bret is looking forward to working with Gary Crowton as one of the quarterbacks at BYU this fall.

While the seven Engemanns have impressive individual accomplishments, one of their greatest experiences was completed together.

The Engemanns were the original family in “Saturday’s Warriors” and traveled around the country for two years performing the LDS stage play. Karl and Gerri played the parents, and Paul, Shawn, Shannon, and Ryan played the children, with infant Ryan wearing a pink dress to be “Baby Emily.”

“Lex de Azevedo said he needed me to be the mother not so much because of my acting ability, but because he needed my about-to-be-born baby to be ‘Baby Emily’ — boy or girl,” Gerri says.

Shawn says being in “Saturday’s Warriors” was special and unique.

“The further I get away from it, the more I value that experience,” she says. “We were able to deliver a message that is so great and so important — it was a magical time.”

The days of traveling and performing as a family are behind the Engemanns except for an occasional concert. In fact, finding a time and place for a family picture is nothing short of a miracle.

But with all this activity, success, and notoriety, there are also disadvantages.

SPOTLIGHT CAN BE FRUSTRATING

“Sometimes there is reverse discrimination,” Gerri says. “People can be critical of others in the public eye, but we’re just bumping along like normal people. We just happen to be associated with people who are high profile at the moment.”

Gerri points out that the entertainment business is much like other businesses.

“We work hard, and we’ve had a great time and many exciting experiences,” Gerri says.