Home Sports Professional The Minor Leagues can be a Major Draw

The Minor Leagues can be a Major Draw 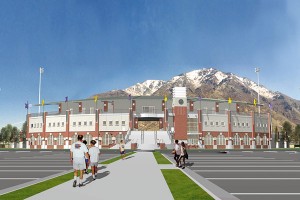 The Provo Angels come to us by way of Helena, Mont., where the population base is one-tenth the size of Utah Valley. Owners are hoping to build this stadium for the Angels in southeast Provo by the 2002 season.

Arriving at the ballpark five hours before the first pitch might seem unusual to most people, but that is the hold minor league baseball has on me.

Two years ago on a newspaper reporting assignment, I visited Kindrick Legion Field, then home of the Helena (Montana) Brewers.

The team, now called the Provo Angels, led off its inaugural season in Utah County June 16.

Regardless of the number of Angels games I might attend at Brigham Young University’s Miller Park or at a yet-to-be-built Provo baseball stadium in the extreme southeastern part of town, that late summer day in Helena will remain one of my greatest baseball memories.

It wasn’t the ballpark that kept me there two hours later. The Brewers’ field at that time was a glorified American Legion diamond with rocks and holes in the infield and yellowing grass in the outfield.

In fact, the team’s parent club, the Milwaukee Brewers, feared its best rookie prospects might get injured in Helena, so they were sent to Ogden.

Besides, earlier that summer I visited one of the greatest baseball shrines in the world: Chicago’s Wrigley Field. Comparing Kindrick Legion Field to Wrigley is like comparing Helena slugger Hector Garcia to Joe DiMaggio.

IT WASN’T THE TEAM

As a rookie league team, the Brewers’ roster was filled with recent high school and college graduates who still needed to refine their skills. At that level, baseball is not as much about winning as it is about learning.

It wasn’t the fans.

Mostly working class Montanans, the Brewers’ fans at times seemed more interested in $1 beers on “Thirsty Thursdays” than in the finer points of America’s national pastime.

Besides, knowing that I had come from Provo to write an article about the possible move of their team, the fans heckled me throughout the night.

Luckily, there weren’t many of them. The Brewers only drew an average of 739 fans per game.

I think it was the team manager’s son, a 10-year-old, who took batting practice and did infield drills with the real players before the game.

I think it was the elderly man in the stands who sat quietly the entire nine innings, clutching tightly a glove so worn and ancient that it must have caught its first fly ball in another century.

It must have been the Brewers falling behind, making a comeback and then giving up two runs in the ninth to lose the game.

It was the dozens of children running through the sprinklers in the dark long after the players had showered and exited the cinder-block building beyond third base that functioned as their team clubhouse.

I found a lot of reasons to love baseball and life that day.

Along with my selfish giddiness at the prospect of professional baseball in Provo, I felt sadness for Helena because losing baseball is like losing a library or a grandmother.

Two hours after the final out had been made, I was still in the stands, held there by something much greater than just a game.

Edward L. Carter covered Utah County news for three years at the Deseret News. He is now pursuing a degree at BYU’s law school and teaching journalism at BYU.