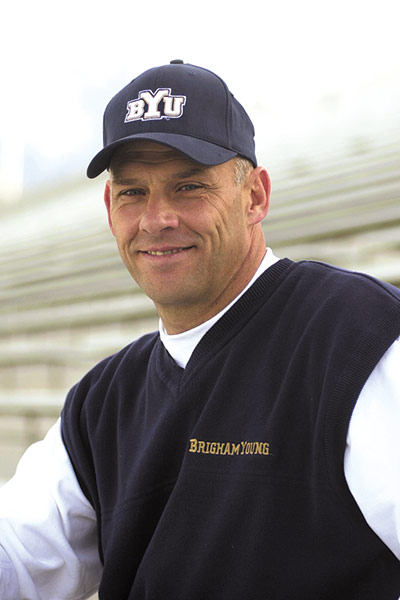 While living in first New Hampshire and then Boston, Gary Crowton and his wife, Maren Peterson Crowton, absorbed all the Northeast had to offer — seafood, walks along the beach and an academic and peaceful surrounding.

“I loved the Maine Lobster,” Crowton says. “My family learned to enjoy good seafood while we lived in the Northeast.”

Later they moved to Louisiana. “Louisiana has some of the best biking trails in the country. Definitely in the top 20. That’s where my wife started biking with friends,” Crowton says. “After a while, I started biking with my wife, and now it’s a hobby we enjoy doing together.”

In addition to biking, the Crowtons enjoyed everything else the Pelican State had to offer — from the cajun food to the swampy waterways and state parks.

Most recently, the Crowtons had a two-year layover in Chicago, where Crowton worked as the offensive coordinator for the NFL’s Chicago Bears. Again, the Crowtons did not just live in Chicago — they immersed themselves in it. Crowton says he and his family threw themselves into everything from Wrigley Field and Sammy Sosa to polish hot dogs.

Now, this Orem High School alum and his family have come full circle and returned home to Utah County, where Gary grew up and played football at Orem High School, where he was All-State at quarterback.

“I tell people all the time that for someone who’s from Orem, driving through his old neighborhood, I sure get lost a lot driving around. Provo is a much busier place than it was 20 years ago.”

But now it’s 2001, and the Crowtons have changed, too, largely because of their pass around the country catching football coaching opportunities as they came along.

Crowton says his career in all levels of football and in all areas of the country  has been a good thing for his wife and family.

“My wife likes football. She likes being a part of it. She’s not just been a good sport — she’s really enjoyed all aspects of my job — including living in different areas of the country,” Crowton says.“Maren has been very supportive of my career. She’s gone through the ups and the downs with me, and through it all she’s been patient and positive.”

The Crowtons have six children, ranging from a toddler to 14 years old.

A glance through the local sports section might make it seem like football and Crowton are synonymous. And although there is much hype with Crowton heading into his first season, football is only one aspect of his daily routine.

“Our family likes to take advantage of all the recreational opportunities here. We enjoy hiking and biking. We also like to go to Seven Peaks and Lagoon and eat at all the new restaurants,” Crowton says.

“As part of my job I have a membership at the Riverside Country Club (in Provo). That’s something LaVell (Edwards) took advantage of while he was coaching here and I’ve also tried to take advantage of it. I like the golfing and relaxed atmosphere at Riverside,” Crowton says.

“We love to head down there. We get together with family and friends and barbecue,” Crowton says.

However, you won’t catch Crowton taking new recruits down south. Recruiting rules say that players can’t go outside a 30-mile radius of the university they’re visiting. 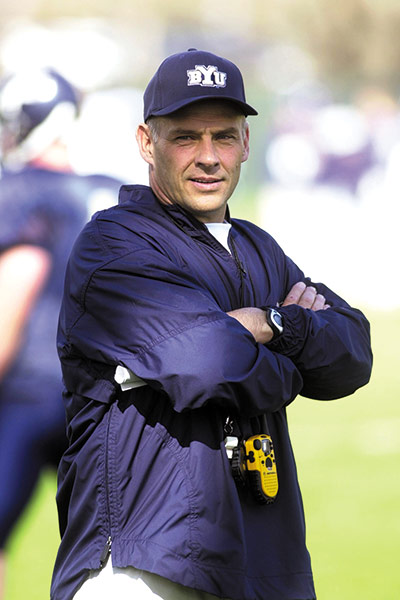 While some have already labeled Crowton as a “hands on” type of coach, he says that putting together winning teams takes hard work and preparation from everyone involved.

And while winning is important to Crowton, he says developing and maintaining solid, good relationships is what matters in life.

“I have all my players’ best interests in mind. I feel like their father in many ways,” Crowton says. “Everyone wants to win football games. But it’s also important to me that my players graduate and stay out of trouble. I value the relationship I have with every player on my team.”

While relationships are important — just as predecessor LaVell Edwards always said — Crowton was hired for one reason. He’s extremely smart and he knows how to win. And, it doesn’t hurt that he has a love for the Cougars.

“What do I love about being the football coach at BYU? I love dealing with the players and trying to get them to stretch and grow. I also love the coaching. I love the scheming that takes place on the sidelines. Trying to outthink, outplan the opposition,” he says. “I love watching my players work. I want everyone at BYU to continue building the strong foundation that’s already been established here. I want my players to be well conditioned, to do well in the classroom and have good civic attitudes.”

Crowton also says he’s looking forward to playing in sold-out LaVell Edwards Stadium. “It’s nice to be back in a place where football is important to the community.” 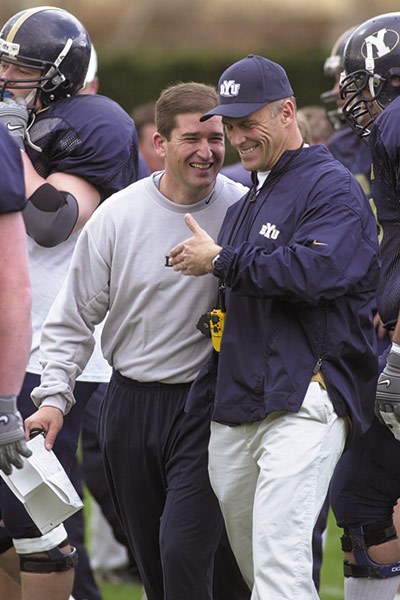 Mike Borich, offensive coordinator/wide receivers coach, has a laugh with Coach Gary Crowton. Borich and Crowton have coached together before — most recently with the NFL’s Chicago Bears.

“This job is not a stepping stone for me. It’s been a long time coming. Hopefully we can be successful here and piece together several successful seasons. I don’t think you come into a job like this thinking you’re going to stay for 20 or 30 years. Hopefully you start to stack together a few successful seasons and the years start to add up,” Crowton says. “I doubt LaVell came into the head coaching position thinking he was going to stay for as long as he did.”

Crowton says he doesn’t consider himself more than he really is: a father, church member and football coach. “I think what people will see about me is that I’m just a normal guy trying to do the best I can. There really isn’t anything special or not special about me. I’m just trying to make the most out of life.”

Crowton’s life is showcased inside his office in the Smith Fieldhouse at BYU. A Chicago Bears jacket hangs in the corner with photographs of past teams and family vacations dotting the walls of the square room.

His job has taken him around the United States. He’s seen big wins and losses. From the extreme Northeast to the deep south to America’s heartland — and now back in the Rocky Mountains — Gary Crowton has come home.