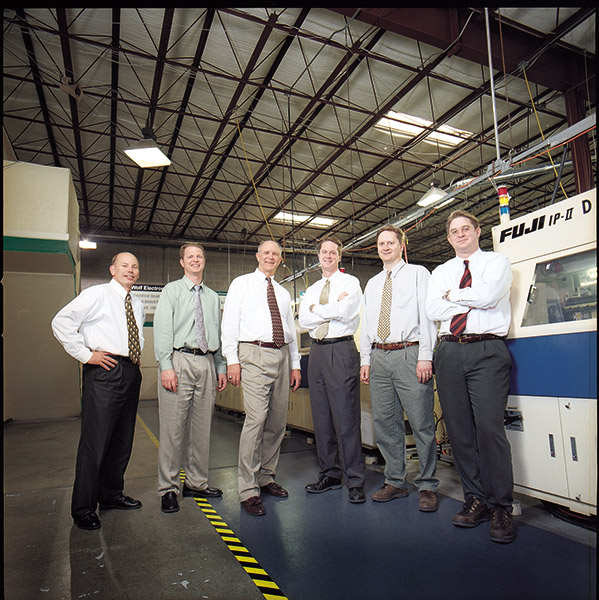 While the other five principals chuckle at the comparison, there is a certain amount of family dynamics, balance, harmony and functionality to the way Wolf Electronix is run — much like a music group.

“If any area starts lagging it can get ugly,” says Dennis Gleason, vice president of sales and marketing. “This is one of the few non-dysfunctional family-run organizations I have been a part of. It’s because they take it seriously, they take it personally and they hold each other’s feet to the fire.”

And Gleason would know. He is the only stock holder in the company that doesn’t have the last name “Trent.”

Orem-based Wolf Electronix was started in 1997 when five members of the Trent clan pooled their resources, knowledge and experience with contract manufacturing and started a company of their own. The five — Jim Sr., Jim Jr., Jack, Robert and David — each had experience in the industry and brought different skills to the table.

Jim Sr. was a former employee of Hewlett Packard, and Jim Jr. was a manufacturing engineer who had worked for Compaq. Robert and David had experience on manufacturing lines with quality control. Jack had the financial know-how to be the company’s CFO. Shortly after the company started, Gleason was brought on to fill a hole in the Trents’ experience — sales and marketing.

The first months were tough, with work days lasting into the late evenings with the only workforce being the Trent family.

However, the hard work that the original team members went through is paying off. The company ranked No. 1 in the annual “Utah 100” — a list that recognizes the fastest-growing Utah-based businesses.

The company has experienced growth of 7100 percent over its first five years. Wolf Electronix did $14.5 million in sales in 2002, and Gleason estimates sales will be $18 million for 2003—$2.5 million of which will be earned in March alone.

Wolf Electronix is also opening a branch in the Denver area to facilitate growth.

The secret to the company’s success has been channeling energy and resources.

“One key for us is that we focus on what we do well and outsource everything else,” Jim Jr. says.

For example, Wolf outsources human resources and plastics. Each member of the family — including Gleason — is responsible for a specific area, which leads to accountability.

Wolf Electronix has struggled with many of the same issues that other businesses start with, not the least of which is cashflow.

“The three biggest challenges to starting your own company are, first, money, second, money and third, I would probably say is money,” Jim Jr. says. “It really is tough.”

The Trents were able to fund much of the business by themselves, but also took out loans to make up the difference.

Besides money, Trent says that finding a dedicated, skilled workforce and generating sales are the other two keys to running the family business.

“We have a very good, devoted and diverse workforce,” Gleason says. “We take pride in the number of families we can employ.”

The diversity is evidenced by the quality control manual, which is in five languages.

The workforce, and the hands-on nature of the management team, enable the company to reach higher goals each year. One goal was to become ISO-9000 certified, which has increased business.

An open-door policy to customers has also benefitted the company, and Gleason says his sales staff is careful to offer only what the company can deliver. Again, it comes down to knowing what your company does well.

“One of the pitfalls in this industry, and other industries, is to try to be all things to all people,” Jim Jr., says. “It is much better to overdeliver than under-deliver.”

The open-door policy is also applicable when mistakes are made.

“We try to limit problems, but when they come up, we’re open with our partners,” Jim Jr. says. “Our partners usually find this refreshing. They know what’s going on and we work through it.”

This attitude will likely help both the company and the family stay strong.