Golden advice from a senior 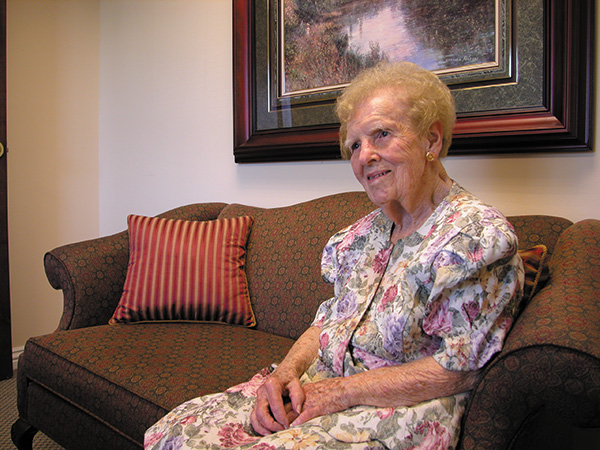 Mima Rasband has watched Provo evolve in the past century.

It was the year Leo H. Baekeland applied for a patent on a new product called plastic. It was only a year after Henry Ford began producing the Model T and it was five years before Archduke Ferdinand would be assassinated, starting World War I.

It was also the year Mima Rasband, a longtime Utah County resident, was born.

A 1927 graduate of Wasatch High School, Mima moved down the canyon from Heber City that year to attend BYU – under President Franklin S. Harris. She’s been in Utah Valley ever since.

Now 94, she lives at the Courtyard at Jamestown in Provo and enjoys a life of relaxation. She is a retired teacher, having taught first grade at Karl G. Maeser Elementary and then moving on to BYU as an instructor in the elementary education department, where she taught from 1945 until her retirement in 1975.

Although she never married, Mima enjoys the family she shares with four siblings who are still living.

We sat down with her recently to get her thoughts on Utah County in the 20th century and what she thinks of the new Millennium.

UV: What is your earliest memory from growing up in Heber City?

Mima: My father worked at a department store in town but kept a dairy farm so that my brothers would have a place to work. My brothers would milk the cows and we would sell the milk to the two hotels in town. I remember delivering milk every day to those hotels. There wasn’t refrigeration and processing like we have now so you had to deliver milk every day.

UV: What did you do for fun?

Mima: We played outdoor games like Kick the Can. Kids today probably have never heard of that, but we loved getting together and playing games outside.

UV: When did you start teaching first grade?

Mima: I started teaching in 1929 at the Maeser School in Provo. Back then you only needed a two-year certificate to teach first grade. There’s a lady here (at the Courtyard at Jamestown) whose husband I taught when he was in first grade. That tells you how long ago I started.

UV: You have traveled from Heber to Provo countless times over the years. How has the drive through Provo Canyon changed since you first made it?

Mima: It doesn’t seem like the road has improved much. There are still too many bends in it. I remember one year we had a whole bunch of snow go over the road. We didn’t have snowplows then, like we do now, and so they built a platform road over the snow. We used that until the snow melted.

UV: What was the speed limit through the canyon when you were attending BYU?

Mima: I don’t remember if we really had speed limits then. I will say that if you were driving 35 miles per hour anywhere you were going mighty fast.

My brother was arrested for driving 25 miles per hour in Heber while he was getting things ready for his wedding.

UV: How has BYU changed since you were a student?

Mima: When I went there it was located on University Avenue, except two buildings that were on Upper Campus. You still only had 10 minutes to get to Upper Campus all the way from 5th North.

We used to live with families. Some of the families would rent out just the room and others would include some food with it. We would live with the family during the school year.

UV: How have first graders changed since you started teaching in 1929?

Mima: I don’t think, for the most part, children have changed a lot, when you get down to it. Children today play video games and computer games, which children obviously didn’t used to play.

The real difference in first graders, in my opinion, is in the attitude of the parents. Back then, parents sent their kids to school for a chance at an education and for the excitement of learning. Now, a lot of parents are sending their kids to school so the kids don’t interfere with their lives as much.

Children do seem to come in knowing much more. Television has helped with the basic skills of reading and counting. When I started, television wasn’t around and the children came in a little behind where kids are now, I think.

UV: Over the years, what have you learned about children?

Mima: Children do want to learn. Sometimes you just have to show how much you love them and want them to succeed. You have to be there for them.

UV: What’s different about Utah Valley from when you first moved here?

Mima: Provo used to be a little town. Now it’s a big city. When it was a little town, people used to walk more. I walked to work every day in high heels. Now people are in a hurry all the time.

Children used to walk to school even if they lived a couple of miles away. Now, if a child lives across the street from the school they feel like someone should drive them there.

UV: Where did you used to spend Friday nights?

Mima: I think most people would go to the movies. There were two theaters in Provo and they were always full.

UV: What’s the secret to longevity?

Mima: The things you eat and the activities you participate in.

UV: So there’s something to this “diet and exercise” thing?

Mima: There sure is. Of course, inheriting good genes helps. My father died in his late 70s, but it was a farming accident.

UV: What advice do you have for others?