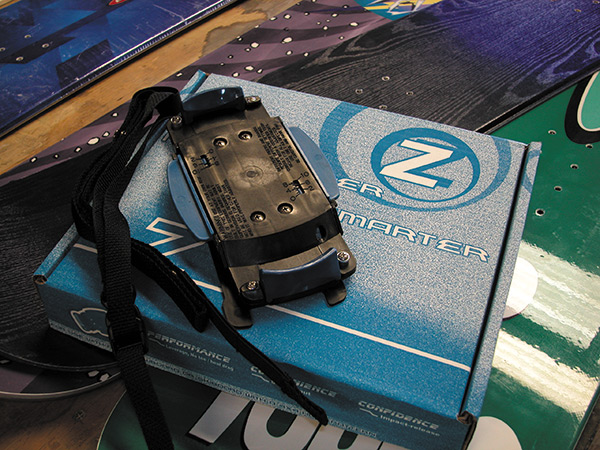 The emergency release bindings developed by Orem-based snowboard manufacturer, Revolution, will allow snowboarders to adjust the binding’s settings to meet the boarders specific needs. The Z-model binding is the first of its kind to hit the snowboard market and fits easily on existing boots and boards.

Dr. Doug Furr didn’t come on board as vice president of engineering at Revolution until he saw the potential damage that can be done from snowboarding without release bindings.

“I was visiting a friend who is a doctor at the University of Utah Medical Center when I saw the helicopter land and the guys in white carrying in this guy with blood all over his legs,” Furr says. “Then his mom was coming in behind him with this look – I wish I had a camera so other parents could see the look – and she was carrying his snowboard that still had his bindings on it. I called (the staff at Revolution) up and told them I was on board.”

What Furr signed up for was the chance to work on a binding release system designed for snowboarders and manufactured by Revolution, an Orem-based company.

Matthew Miller, son of Utah skiing legend and entrepreneur Earl Miller, and his team at Revolution have done more than design a state-of-the-art facility for manufacturing snowboards and skis. They have actively researched a way for people to enjoy snowboarding with less risk.

The Z-model binding system is a multi-angle release system that Miller hopes will not only make current boarders safer but that will also open snowboarding to an entirely new generation of snowboarders.

“We believe we can lower medical, legal and insurance costs by 90 percent,” says Miller, chief executive officer. “We think it will make boarding more family friendly and will encourage people who haven’t tried it before to try it.”

Miller isn’t a stranger to industry safety. His father, who started Miller Ski Company in 1946, was a leader in skiing safety and was the original patent holder for the ski brake that has become an industry mainstay.

Revolution is making more than specialized bindings. The company has two custom-designed machines – affectionately known as “Daisy” and “The Mangler” – that are each capable of producing six snowboards at a time. Other manufacturers are only able to bend and mold one snowboard at a time.

“We’re going to make it easier for companies to keep their manufacturing in the United States,” says John Durrant, chief operating officer.

As it is now, the industry does a majority of its manufacturing in China, where machines produce snowboards one at a time.

Revolution is also offering the ability for customers to purchase custom-designed boards for about the price of buying another one at a sporting goods store. Its “Build a Board” feature, which is part of the company’s Web site, www.rideharder.com, allows customers to download graphics and write text exactly how it will appear on the board.

“This is a popular feature for a lot of companies out there who are looking for an incentive for salespeople as a promotional item,” says Brady Fox, vice president of sales and marketing.

To combine the dedication to increasing safety on the slopes with the ability to design a custom board, the company is creating a snowboard safety outreach program to school children in the area. As part of the safety seminar, children are allowed to create their own snowboard design. A winner will be selected to have his or her design made into a board.

“We’re trying to get the local community involved,” Miller says.

The company will also be allowing free trials of its snowboard binding system at a number of ski resorts throughout Utah in the coming months. 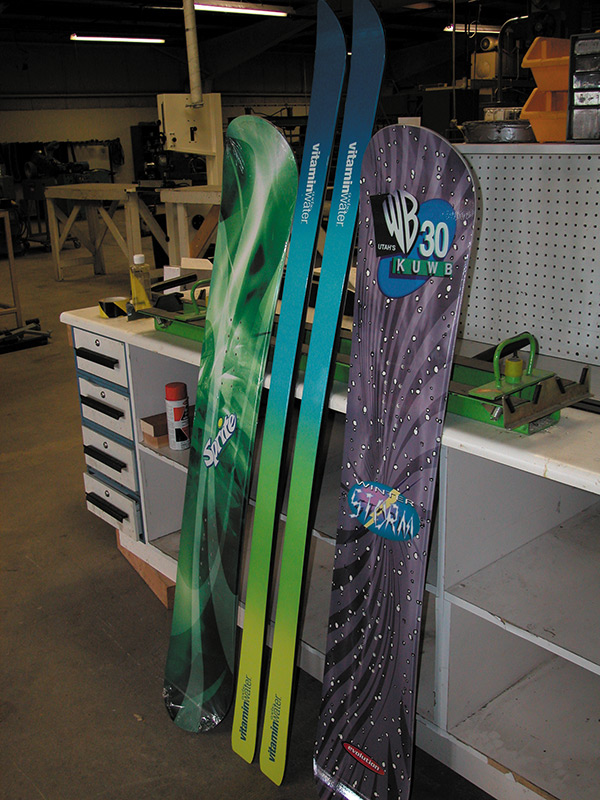 The local snowboarding company enables custom graphics to be placed on its manufactured boards. Many companies use the boards as sales incentives for employees or as marketing tools and give-aways. Because the manufacturer handles things in house, the cost for the custom, “one-of” models is competitive in price with what a normal one costs in a retail store.