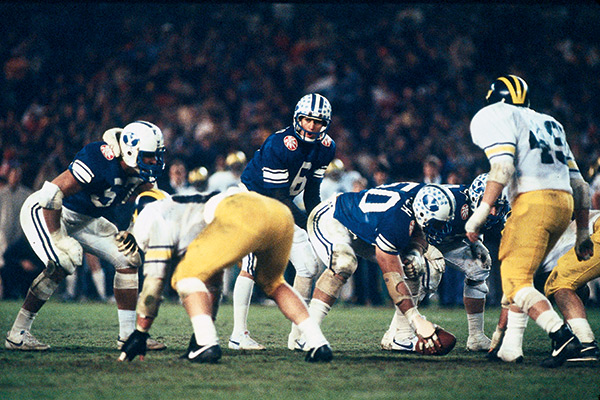 “We played both of them (BYU and Oklahoma), lucky me, and I think BYU is better. We felt we had a chance against Oklahoma, but against BYU all I wanted to do was get the game over with and get out of there.” Baylor head coach Grant Teaff (on whether BYU or Oklahoma should be ranked No. 1) Salt Lake Tribune, December 17, 1984 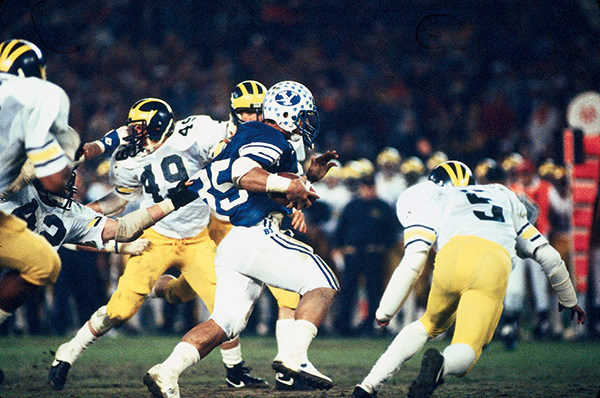 Lakai Heimuli picks up some hard-earned yards against Michigan in Holiday Bowl VII. 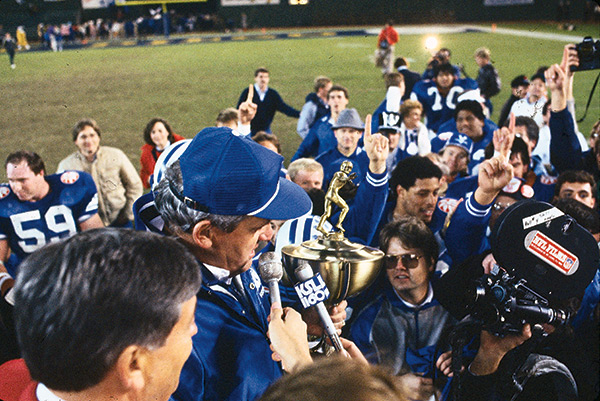 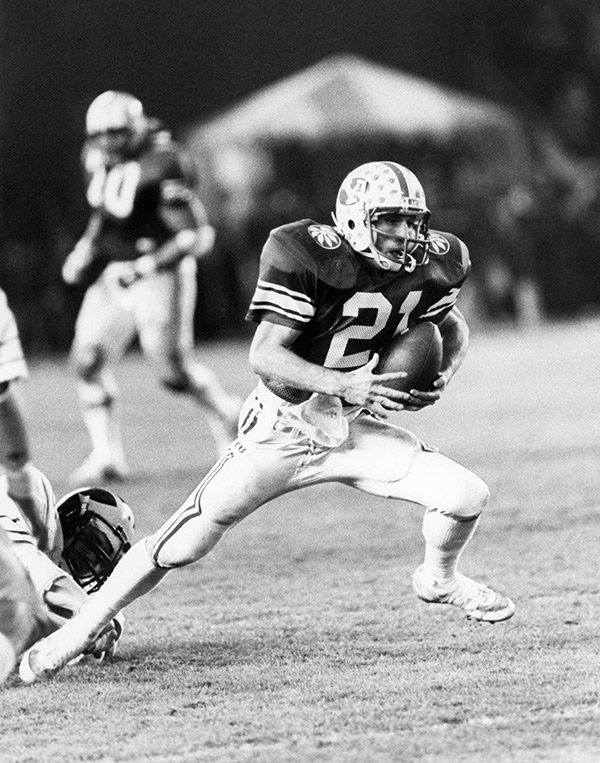 However, most Cougar fans are unaware that John Bosco, Robbie’s older brother, also played an important part. The year was 1977 and Robbie was just entering his freshmen year of high school and playing on his first football team.

The coach of the Roseville High School 9th grade team in California knew of Robbie’s athleticism and immediately started him at QB. However, after a couple practices Robbie quit the team, saying the football plays were too complicated.

It was his older brother John, who was a senior at Roseville and starting quarterback on the varsity team, who explained the plays to younger brother Robbie, who soon rejoined the 9th grade team, developed a love for the game, and by the end of his high school career was heavily recruited by many schools before choosing to play for BYU.

“My freshman year, Jim (McMahon) was the team leader. He was fun to learn from and treated me good,” Robbie says. “Steve was the same way. I learned a lot backing him up in ‘83. We had a very good offense that year that broke a lot of national records. We had a lot to live up to in ‘84.”

BYU began the 1984 season with little or no national respect.

To make matters worse, the Cougars were matched up against pre-season No. 3-ranked Pittsburgh.

“It’s a little-known fact that our first game against Pittsburgh was the first live broadcast ESPN ever did. Before that all the games were tape delayed,” says former BYU head football coach LaVell Edwards. “Pittsburgh had beaten us pretty good in Provo a few years earlier, so we were a little nervous.”

Robbie says he remembers being “more than a little nervous” the night before the Pittsburgh game.

“I remember lying in bed the night before the game thinking, ‘I can’t do this.’ I was feeling a lot of anxiety,” Robbie says. “We had just lost a lot of good players from the ‘83 team. I thought we were in over our heads.”

Robbie says he would rank the first three passes he threw to start the Pittsburgh game among the worst passes of his career.

LaVell says, “I remember Robbie’s first pass was still climbing when it went over my head. But he settled down after the first series. Robbie was one of our best athletes; sometimes he just put a little too much pressure on himself.”

Robbie says LaVell helped him not lose confidence in himself.

“LaVell met me at the numbers on the field as I was walking back to the bench,” Robbie says. “He put his arm around me and said, ‘Don’t worry about a thing. Just keep working on it and things will work out for the best.’”

Although the end result was astounding, Robbie says it took most of two games for the offense to gain confidence and a swagger on the field.

“After our second game (against Baylor) we knew we were good,” he says. “There was no more talk about the ‘83 team. The new talk in town was the ‘84 team. I was feeling a lot less anxiety after the second game. We wanted to do something special. BYU teams had already finished 11-1 or 12-1, so we wanted to go undefeated for ourselves and for our fans.”

But BYU didn’t win the national championship on offense alone.

The ‘84 Cougar defense has been labeled as one of the stingiest in BYU history, finishing 10th in scoring defense in 1984. Players like Shawn Knight, Jim Herrmann, Leon White, Kurt Gouveia and Kyle Morrell still rank among the greatest defensive players at BYU in the last 20 years. (see the Utah Valley Magazine ‘All 20th Anniversary Team,’ page 34)

Many BYU defensive players were All-WAC in ‘84 and went on to play in the NFL. Perhaps the most memorable defensive play of the ‘84 season came from All-American defensive back Kyle Morrell.

Died-in-the-wool BYU fans remember the famous goal-line stand against Hawaii where Kyle soared over the offensive line to sack Hawaii’s quarterback and in the process preserve the undefeated season.

“The one thing I remember was that we had been playing really well defensively that game,” Kyle recalls. “As they moved the ball on that drive, I knew I had to do something. I thought that even if I was offsides, they were only going to move the ball like three inches. I wanted to do something, and luckily, I timed it right and I made the play.”

Special teams was also a strength of the ‘84 team.

Punter and kicker Lee Johnson, who had a long and storied NFL career, along with return specialist Vai Sikahema, left little to worry about when it was 4th-and-long.

Vai’s favorite memory from the national championship season happened the night before the Pittsburgh game. The team met in the Double Tree hotel in downtown Pittsburgh to eat cheeseburgers and watch highlight films. After 40 minutes, the coaches were excused and the team captains took over.

“Craig Garrick got up, and this was the first time ‘national championship’ was mentioned,” says Vai, who played in two Pro Bowls before ending his NFL career. “It was in this context, ‘Men, if we win tomorrow we will run the table and play for a national championship in December or January.’ I wrote that down that night. It may have been lost on some people, but not on me. That experience became even more special since Craig passed away in 2001.”

“I played with a broken elbow in ‘84, but I played hurt because I wanted to win,” he says.

LaVell remembers hearing talk of a national championship among his players after the Pittsburgh game.

LaVell says the ‘84 team was not his most talented, but the players came together unlike any other BYU team to win all the close games that season.

“Our practices were more spirited than some of the games that year,” Glen recalls. “I was the ultimate taunter. Every guy out there from the lowliest freshman to the senior captains wanted to be the best. We were so competitive.”

Robbie says he felt like it was BYU against the world, especially before the national championship game vs. Michigan.

“It was kind of fun to go somewhere where everybody wants to beat us so badly,” Robbie says. “BYU had won a lot of WAC championships back then. We wanted to shoot for something a little higher.”

Even today, 20 years after the fact, some still pose the question: Was BYU really the best college football team in the nation? Former players from the team say it’s impossible to tell, but they are the ones wearing the national championship rings.

Vai played in the NFL with teammates from other top ‘84 teams such as Oklahoma and Washington. The debate on BYU’s top honor continued for years.

Vai says the 1984 defense was the best BYU has ever had.

“No one was going to outright beat us that year,” he says. “We were too explosive and too deep.”

Defensive lineman Jim Herrmann says there will always be controversy.

“Was our team the best in the country that year?” Jim asks. “That’s sort of a joke. Every year there is a debate about who is the best. Who was the best team last year? USC? LSU?”

Jim points out that BYU was the only

only undefeated Division I team in the country.

Glen says that initially the team was naive to think they had a chance at the national championship distinction.

“We were supposed to bow down to Pitt and let them beat us,” Glen says.

Kyle says all the stars aligned for the Cougars to win the national championship.

“When I went to BYU, there was such a winning tradition,” Kyle says. “Losing just didn’t happen and wasn’t acceptable. Before the Michigan game, I remember my older brother saying, ‘You guys have no idea how lucky you are to be in the position you’re in.’ I was 20 years old and really didn’t have any idea.”

Everything played out for the national championship. Other teams lost key games, and BYU came out on top 13 times.

“Now, it probably means more because it doesn’t look like anyone in the Mountain West Conference is going to be able to win the national championship again,” Kyle says.

Marv Allen says he thinks about the championship 20 years later and realizes he may not have known at the time what a great opportunity it was.

“It was a special team and things came together for us,” Marv says.

From the ‘84 team, 15 players were drafted by 12 different NFL teams. BYU hasn’t produced NFL players at that pace in many years.

Despite the success of members of the ‘84 team going in the pros, the general consensus is the ‘84 team wasn’t BYU’s most talented.

“We were just a bunch of guys who loved to play the game. Period,” Glen says. “We didn’t care about the stats or the glory. We cared about winning. Every guy would show up and do what it took to win. None of us were perfect, but as a team, we were perfect.”

LaVell confirms that the ‘84 team came together unlike any other team he has coached.

“I have very positive feelings about that team,” he says. “It was a special year.”

The BYU Athletics Department will do what it can to ensure nobody forgets the team-concept of the ‘84 team.

The entire 1984 team will be this year’s sole inductee into the BYU Athletic Hall of Fame, Sept. 3, at the Wilkinson Center Ballroom.

The team will also be honored the next day during pre-game and halftime ceremonies at the BYU-Notre Dame game.

In addition to the induction, a special limited-edition lithograph showing LaVell and the 24 starters from the ‘84 team has been commissioned.

Only 1,984 lithographs will be available with each of the starters’ signatures directly below their photos.­­

“It is a really significant achievement, and a richly deserved one, to be inducted as a team to the Hall of Fame,” LaVell says. “I am looking forward to seeing these guys when they come back to the banquet. It was a very special year and a very special group of young men who stuck with it and worked hard through a lot of really tough and close games.”

Jim says it is hard to remember every score, but he will never forget the feelings of the season 20 years ago.

“From the outset, we looked at our schedule and felt we could run the table,” Jim says. “We thought we had a good chance at being ranked No. 1 at the end of the season.”

“I have played on a lot of teams before, but none like that,” Marv says. “There was a lot of trust among the guys.”

Perhaps the coach can see the season best for what it was.

“The more I look back on it … I knew at the time it was so improbable, it could just never happen, but it did,” LaVell says. “It’s since come into focus that it really was some kind of experience.”