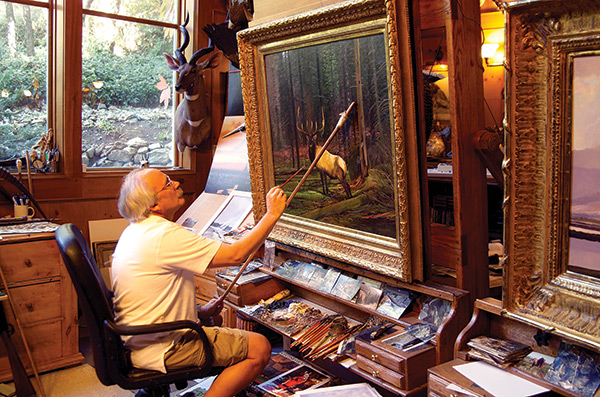 Michael Coleman sees more than the rest of us see. He senses the changing northern light in the two-story windows of his Provo art studio. He knows the two times of day when the sun brilliantly shines on nature and its inhabitants, of which humans are only one species.

He quietly translates his perspective into the language of paint as he listens to classical music, answers his own phone and avoids art shows and public appearances as much as possible.

“I’m notorious for not showing up,” Michael says. “I like my work to speak for itself.”

And his pieces have spoken to thousands of art lovers the world over. Galleries in London, New York, Johannesburg and Jackson Hole, Wyo., proudly sell his originals and limited edition prints. In Utah Valley, Aspen Art and Frame and Coleman Studios showcase his work.

“He has a way of bringing in light and making it glow,”  says Ethan Allen, owner of Aspen Art and Frame. “He can add a streak of brilliant sunlight that catches your eye. He’s got a worldwide following, and I know personally several people who collect his work.”

Michael has kept an original or two of his own to hang in his library, although the leanness of the early years remind him to keep painting and to hope others will want to purchase his art.

“I remember getting down to my last $100, and I knew I was not fit to do anything but paint,” Michael says. “That’s all I’ve ever thought of doing.”

Michael was the class artist throughout grade school.

“I liked to hunt with my BB gun, and then I’d draw the animals,” he says.

As a teenager, Michael gravitated to the phrase “commercial artist.”

“I thought that sounded respectable,” Michael says. “I really just wanted to paint.”

Although Michael grew up in Provo, he never planned to go to BYU. Then he found himself on campus one day inspired by a display of 19th century Hudson River paintings.

“I didn’t know to look at the dates — I just figured they were painted by the BYU professors, and I said, ‘I am coming here,’” Michael says. “Needless to say, I was disappointed to find out the faculty had not painted the pieces I loved so much.”

BYU helped him clarify the type of artist he wanted to be, and he left before he graduated. As a young artist and inexperienced businessman, he took every opportunity that came his way.

“I had no clue what I was doing, and I met this guy who turned out to be a real ‘operator,’” Michael says. “He had a gallery and started selling my paintings for $100, and I was glad to be able to sell them.”

Michael signed a contract at age 21 that he now calls “questionable.”

“I would have signed anything,” he says. “Over time, he kept selling my paintings, but his payments got slower and slower, and then nonexistent.”

Michael soon found out that other galleries wanted to carry his work, and he took what he learned from his first contract and became a smarter businessman.

One of his first big breaks was with First Security Bank when they bought a painting for $150.

“My father couldn’t believe I got that amount of money,” he says. “He almost got a tear in his eye. He was happy and flabbergasted.”

Michael’s parents both died when he was in his mid-20s.

“They never saw me making a living with painting,” Michael says. “I wish they were around to see where painting has gotten me. They always supported me. It would have been fun to see the expressions on their faces.”

Michael has been to Africa 10 times — “It bites you, you can’t go once,” he says. He has traveled nearly everywhere around the globe— often by himself.

“It’s never a vacation. There’s always a purpose to it,” Michael says. “Otherwise, I don’t see the point in going. It’s a magnificent world, and there are so many things to see. Why waste time sitting on a beach eating hamburgers?”

Although he has been around the continents, he also finds incredible beauty within 30 minutes of his home.

“I’m still discovering a lot of great things here in Utah,” he says. “There are a lot of places I haven’t been to close by, and I’m flabbergasted when I find them.”

Michael’s day starts around 5:30 or 6 a.m. when he begins straightening the studio. Then he primes some boards and paints until the sunlight is gone.

Michael starts at the top and works to the bottom, finishing as he goes.

“I like to see what is happening in my paintings,” Michael says. “After I put the painting down for awhile, I come back and tighten things up. All of a sudden, things wind down. I set it aside and don’t look at it for a time. Then when I put it up on the easel, it’s just done.”

Michael usually works on five or six paintings at a time — partly to let the oils dry and partly because he’s “in the mood to start something else.”

His subjects come from sketches, notes and photographs from his world travels.

“But mostly, I see images very clearly in my head,” he says. “I don’t try to see all of the details until I get there. I can’t wait to see what the end result will look like.”

Michael says his artistic style hasn’t changed in his nearly four decades of painting for a living.

“I have refined my work and I have a broader view now — and I believe I’m a lot better,” Michael says. “But I’m still capturing the same things. My work may be a bit lighter in color and brighter in color. My skies are more luminescent. In the early days I thought I had to have a dark background, but I’ve figured out ways to put more and more into my paintings.”

Michael is a fast painter. His average painting takes four or five days to paint, although he remembers one six-month project: a 7 1/2 foot-by-11 1/2 foot painting of an elephant.

While other artists study and plan each project extensively, Michael can’t see how they can hold their interest.

“The enthusiasm is a big part of it for me,” he says. “I can’t wait to see what it looks like.”

“It’s a job like anything else, but luckily it’s a really fun one. I’ve always got a million ideas.”

Many of his ideas come from the fall and early winter.

“When the trees lose their color, you can see through to the forest floor, and everything comes alive,” he says.

The fall also reminds Michael of the good old days of trapping and hunting.

“There is an edginess and a feeling that change is just over the hill,” Michael says.

The only thing Michael doesn’t like about this time of year is that the days are getting shorter.

As a sportsman, Michael has gathered enough animals to fill a spacious museum. Instead they peer at him from around his woodsy studio. Indian moccasins hang from the ceiling. A collection of canes stands near the window.  A grouping of spears hangs above the frames Michael is waiting to fill and ship around the world.

About four years ago, Good Morning America came to Michael’s Provo studio to interview him for a package about the National Wildlife Museum in Jackson. One of the producers was anti-hunting, and she kept uttering “I can’t deal with this” as she hunkered down in his fur-filled studio.

One who does understand Michael and his work is Thomas Kinkade, well-known “Painter of Light.” Thomas owns some of Michael’s paintings. A few months ago, Thomas visited Michael’s studio. “He must have taken 96 rolls of film while he was here,” Michael says. “He wanted to see what I was up to.”

At age 57, Michael continues to contribute to the art community. 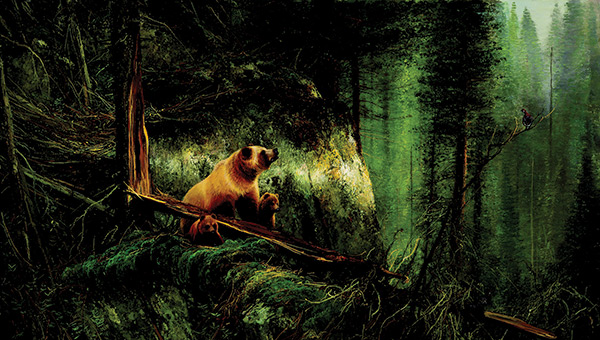 In the North Woods — Grizzly

Michael and his son Nick walked 20 miles in British Columbia scouting out the setting for this oil painting. “The wind was blowing like a bugger and blew down this tree during the night,” Michael says. Although he did not see a grizzly bear on the hike, the bear in his imagination came to life on his easel. 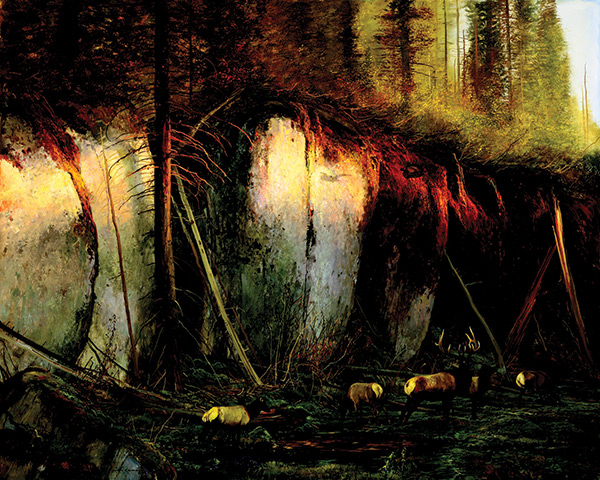 “This is my memory of what a gorge in Yellowstone used to be before the fires — dark and dank,” Michael says. A shadow of a great grey owl is the reason for the title, “Under Silent Wings.” “You’ll see owls in the bush sometimes, but you don’t hear their wings,” he says. 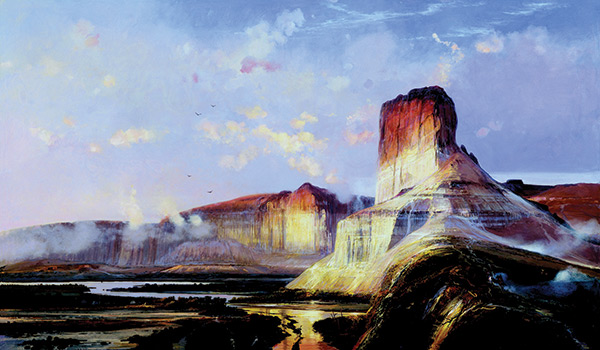 Green River, Wyoming Territory Michael had Green River, Wyo., in mind when he put brush to canvas. “This is what I imagine it would have been like 200 years ago before the highway ran right beneath the mountains,” he says. 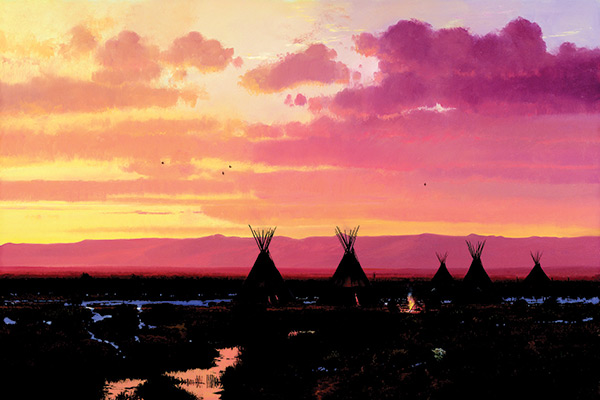 On the Musselshell Michael likes to imagine tepees filling the valleys, with smoke winding through the air. “Indians, the land and the atmosphere all appeal to me,” Michael says. 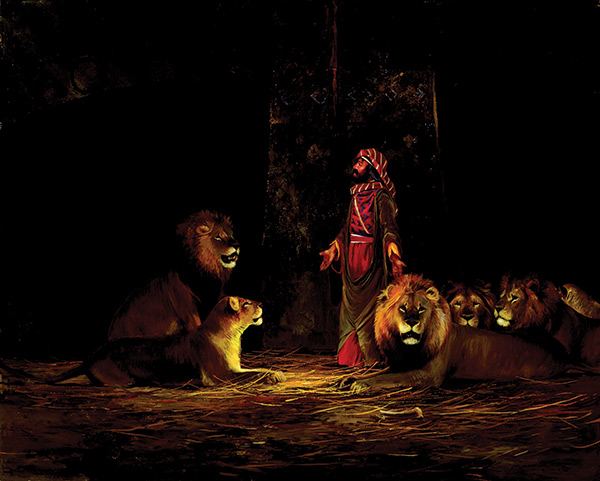 Daniel in the Lion’s Den

Michael plans to do more religious pieces, such as this one he painted of Daniel with the lions. Michael has hunted a few lions in his day, including some now permanently mounted in his studio. Michael painted the lions the right size to show how big the animals are. “To be amongst the lions like that would make for quite an afternoon,” he says.

Q&A: What is your favorite Christmas memory Next post