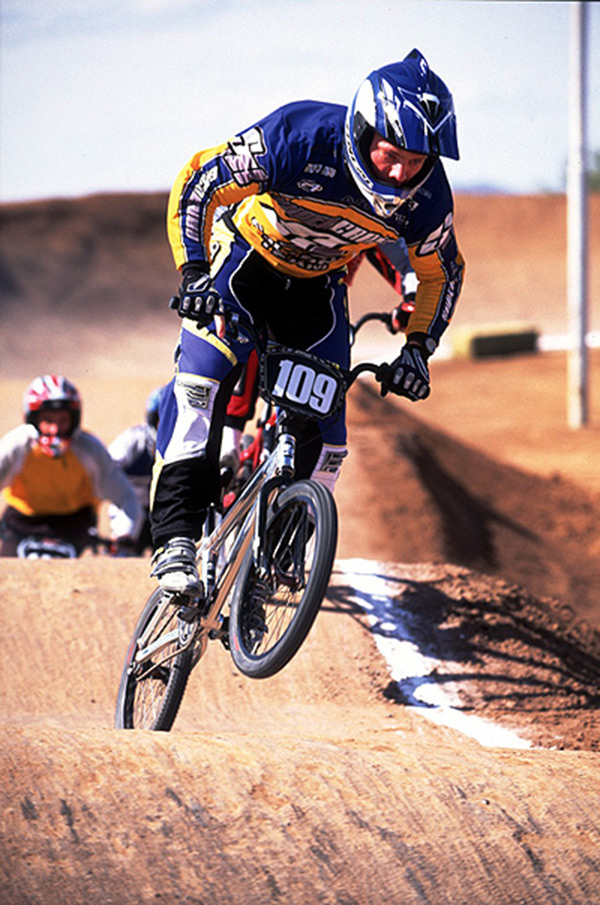 American Fork’s Todd Parry is like many Utah County fathers. He works all day (in Todd’s case at a Tesoro oil refinery in Salt Lake City), enjoys coming home to three children and often feels that he is away from home too much.

But Todd has a much different “hobby” than most fathers. Instead of spending Saturdays at Hobble Creek Golf Course or watching the latest movie, Todd can be found at BMX tracks around the country competing for money.

Todd is a professional BMX racer, although he describes the sport as more of a hobby where the prize money is a bonus.

“I love racing, but the money is the least of my concerns,” Todd says. “I want to do well for my sponsors and for my fans, but I consider racing more of a hobby.”

However, Todd’s results don’t reflect his perspective. At age 37, he is too old to compete in the AA Pro class (the highest level sanctioned by the American Bicycle Association, the sport’s governing body), but he is a stalwart in the Vet Pro division for riders 30 years and older. Todd is currently second nationally and is still in the running for a first place national finish.

Todd’s road to being a pro has been bumpy. During a race in 1990, just months after getting married, Todd “destroyed” his knee, causing doctors and others to tell him he was done racing.

But after 11 years and with the encouragement of a great physical therapist, Todd caught the racing bug while attending one of his oldest son’s races. He could only race, however, under certain conditions put in place by his wife.

“One of the requirements was that I would get supplemental injury insurance and that I wouldn’t be gone very often,” Todd says. “She also made me promise that if I got hurt bad enough to need surgery that I would quit.”

Since then — other than some bumps and bruises — Todd has enjoyed immense success.

Life as a professional BMX racer is no easy ride. Todd continues to balance the responsibilities of being a father, husband and provider. He works full time at the refinery and only competes about once a month. Other riders compete every weekend and have more time to practice.

He’s also limited by living in Utah, where there isn’t anyone equal to his skill level to have as a training partner. Todd created a makeshift BMX area in his backyard and travels to a West Jordan facility to train.

Despite the challenges, Todd wouldn’t consider moving to a warmer climate more conducive to competing professionally. There’s little time left in his career (two years at the most, he says) and he knows that his career could end any time because of the risk of injury and his promise to his wife.

But for the time being, Todd continues to enjoy his “hobby” that gives him extended youth.