And the cinematographer makes three 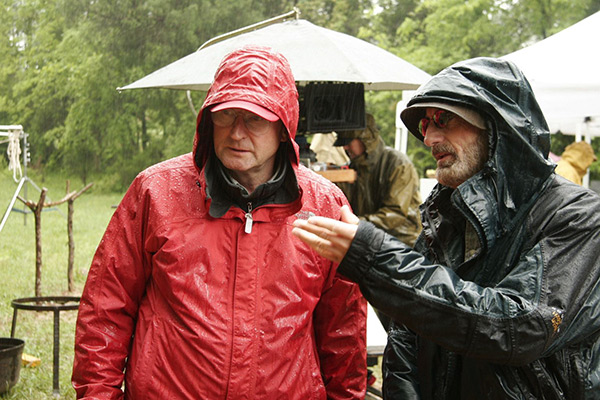 Reed Smoot is an admitted LDS church history buff. So when the opportunity arose for the Academy award-winning cinematographer to work on the second movie in “The Work and the Glory” series, he jumped on the pioneer-style wagon.

“It’s a dovetailing of my special interest in church history and storytelling through cinematography,” says Reed, who is director of photography for “The Work and the Glory: American Zion.” “Our history is so rich and absorbing.”

His fascination isn’t surprising – the Smoot lineage is steeped in LDS Church history.

A fifth-generation descendant of Mormon pioneers, Reed and his family live in the historic Provo house built in 1892 for his great-grandfather, also named Reed Smoot. The elderly namesake was an LDS Church apostle for more than 40 years and U.S. Senator for 30 years. Reed’s great-great grandfather, A.O. Smoot, helped save Brigham Young Academy from financial ruin in its early days (hence the Abraham O. Smoot Building at BYU).

As director of photography for “American Zion,” Reed’s job was two-fold: help director Sterling Van Wagenen visually interpret the script and supervise a crew of 20 people while putting that interpretation to work.

“The context of dramatic emotion grows out of what you put on screen,” Reed says. “But (visuals) need to be subtle so that they don’t jump out; so invisible you’re not even aware of them.”

Much of his time was spent analyzing colors and values of locations, sets and wardrobes to ensure they would complement the dramatic flow of the movie.

He also examined historical pictures, art and other artifacts from the time period.

“We referenced as much church history as we could,” Reed says.

Although the directors were concerned with being historically accurate, “American Zion” won’t have a church film feel, says Reed, who has photographed more than 50 films for the LDS Church, including “Legacy.” Sterling’s interpretation of the script focused on character development – one reason Reed agreed to do the film – and the result is a film that is grittier than the first.

“Treating the subject matter this way might make it more accessible to a wider audience,” Reed says. “A lot of people have a difficult time with the portrayal of revered leaders. The interpretation of church history is a very individualized thing. I think it’s going to be a really rich experience for those who go with an open mind.”

Neither Sterling nor Reed were involved in the first “Work and Glory” film that was released in 2004 but have known each other since they were Boy Scouts in Provo.

“We’ve been trying to find a project to come together on,” Reed says.

While his interest in church history made working on the film more enticing, his professional accomplishments more than qualified him for “The Work.”

Reed’s interest in cinematography started at 12 years old, when he spent most Saturdays making backyard movies with friends. He attended BYU, where he majored in communications. The school didn’t have a film program at the time, but he kept his eye on the camera and moved to Los Angeles for advanced training in cinematography after graduation.

In L.A., Reed teamed up with fellow BYU alum Kieth Merrill, and the two worked on various documentary film productions, including the Oscar-winning documentary “The Great American Cowboy.”

“I have always had sort of an itching to be out there where the stories were being told,” he says. “That’s all I’ve ever wanted to do.”

In the ’70s, Reed worked for the LDS Church on favorites such as “The First Vision” (original version) and “Uncle Ben.” More recently, he was director of photography for “Legacy” and “The Mountain of the Lord.”

Although Reed’s work on church films may be recognizable to most in Utah Valley, he has distinguished himself among his peers for his work on large-format films.

IMAX films such as “Shackleton’s Antarctic Adventure” and “Mysteries of Egypt” have taken him to remote areas of world, pitting the man and his camera against the elements.

“For a cinematographer, they are the ultimate format to practice the craft,” Reed says. “It’s a continuing opportunity to keep absorbing new information, new perspectives.”

His work has won “Best IMAX Cinematography” three times from the Giant Screen Theatre Association and he received the Kodak Vision Award in 2001 for expanding the realm of large-format filmmaking.