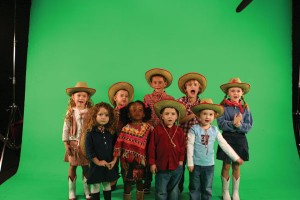 These 10 children are in the newest “Howdy Town” commercial, including my daughter Hailey (far right). Being a stage parent for a day gave me new understanding for child actors and their dedicated parents.

I said ‘howdy’ to being a stage mom for a day.

When 20/20 does their investigations about what stage parents say to their “grown-up” little kids behind the scenes, I find myself thinking, “I would never do that.” Yet I can somehow understand it after having my daughter, Hailey, participate in Halestorm’s latest production, “Howdy Town,” which is a new children’s show with live children, adults and animals on an animated background.
When I arrived at the CMG studios in Orem with my 5-year-old, I was 10 minutes early for the taping of the “Howdy Town” commercial and small spot in Episode 3. I thought about driving around the block again so we didn’t appear too eager, but I saw several parents with cowboy children in tow, so we decided to join them. We were told we could wait upstairs while they got the studio ready. We didn’t hear anything as we climbed the stairs, so we thought we were alone. Yet as we reached the open room at the top of the stairs, we saw several silent parent/child combos.
The lack of conversation could be because it was 9:30 a.m. on a Saturday morning. Or it could be that no one really knew what to say. Perhaps we were all checking out each other’s kids and their outfits. I tried to read the minds of the parents. Perhaps some were thinking, “I knew I should have gone shopping yesterday for a new cowboy shirt for my son. That other boy’s outfit is perfect.”
After a few quiet moments, director Paul Eagleston came up and greeted the nervous kids and excited parents. He got the kids warmed up by having them say “howdy town” with a big arm wave. I found myself resisting the urge to prod Hailey on — “Louder! Smile bigger!” I didn’t dare chime in because I didn’t want to be one of “those” parents.
After a few practice “howdy town” waves, we went down to the studio and the kids cautiously lined up in front of the green screen. One little girl had a green shirt on, so the director asked her mother to get a different shirt. You could almost see the bubble above the mom’s head — “but now her hair bow won’t match!”
After everyone was properly dressed and topped with a cowboy hat, the director did several takes of the kids bouncing, waving and saying “howdy town.” From where I was standing, it didn’t look like any of the takes had all 10 kids looking the right direction. No wonder they told us to plan on two hours. This was going to take some patience.
After the group finished their synchronized waves, the director said, “Everyone off except for Hailey.”
My heart jumped. I’m thinking, “My kid must be the liveliest, cutest one here!” I tried not to look too happy or the other parents would think I was gloating.
The director had Hailey do the bounce and “howdy” as a solo. She did … OK. I knew she could do better, but again I was trying to stay a quiet observer. But after Hailey’s solo debut, I realized that the director wanted each child to take a turn doing their own segment. Now I definitely was not gloating! All the other kids had the luxury of watching Hailey and figuring out what the director was looking for. Note to self: being first is not the best.
The director was more patient with these kids than a brand-new nursery leader would be. He always said, “That was great,” even if the kid forgot to say “howdy town” or wave.
One cute little girl was confused about what to say, so the director whispered, “howdy town.” She whispered “howdy town” back to him. “That’s it. Now just a little louder,” Paul said. 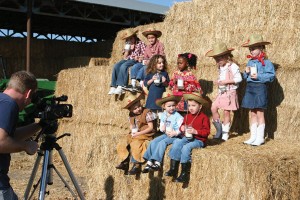 The youngest “Howdy Town” performer for the day was clutching her dad as if she was on the edge of a cliff. The dad was patient with her, but persistent. He obviously didn’t want to go home without her getting some screen time! All of us other parents were patient with this father’s plight — we knew we’d be doing the same thing if our normally precocious child was suddenly having a case of the “shys.”
Twenty minutes after the taping began, another mother/daughter team showed up, and this little girl had perfectly curled and hairsprayed blonde hair.
Her mom, who was also gorgeous, looked like she had been in front of the camera before — and behind it. The mom comfortably took her place beside the director and coached her daughter to say “howdy town” with an ear-to-ear smile. I found myself wishing I had that much confidence. With her mom’s help, this blonde little girl was sure to look great on screen.
After we completed the studio shots, we headed toward Utah Lake to do a segment for an episode on healthy eating. The children were given glass mugs full of milk and then arranged on hay bales. Hailey got bored and put a piece of straw in her mouth.
“That’s cute!” the director said. “Let’s have the other kids do that, too.”
Maybe Hailey does have a future in show business. Then again, I’m not sure I’m ready for a career as a stage parent. 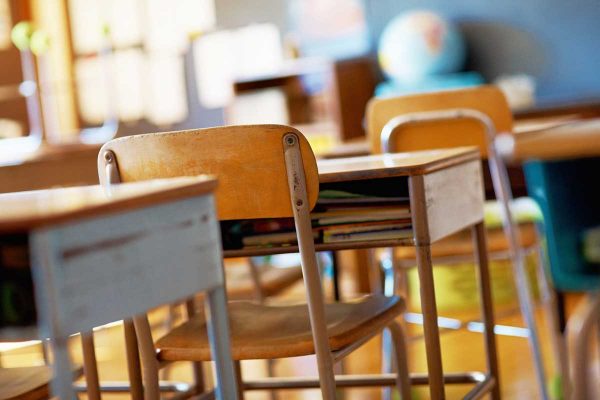