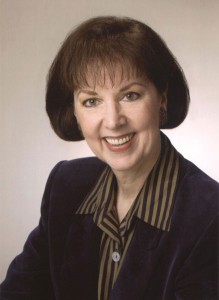 Local image consultant shares her views on image and fashion.

Judith Rasband moved to Utah from Washington to study ballet at the University of Utah. But a knee injury at the end of her first semester quickly ended her dance career, and Judith switched her major to another art form that became her passion: fashion.
“It’s the only art form you get to wear around all day long,” Judith says. “It can provide wonderful variety in everyday life.”
She graduated with a degree in home management and later earned a master’s degree from BYU specializing the artistic, social and psychological aspects of dress.
In 1989, she opened the Conselle Institute of Image Management in Provo and has become a national expert on “business casual” dress and professional image issues. She has been interviewed on “Oprah” and “Good Morning America” and is the author of 12 publications, including “Fabulous Fit: Speed Fitting and Alteration.”
Judith stopped by Utah Valley Magazine recently and chatted with us about her views on image and fashion. Here’s part of our conversation.

UV: What is image?
JUDITH: Image is another word for appearance, and the elements of appearance are dress, grooming and body language, including etiquette. Most people think in terms of first impressions on others, when in fact, the first impression is on you.

UV: You also work in image management. How is that different?
JUDITH: Image management is like business management or money management. It’s an ongoing process of evaluating and controlling the effect or influence of dress and image on you and others and the achievement of your goals.

UV:  There is a cliché that “image is everything.” Do you believe that?
JUDITH: No. Image isn’t everything … but it is certainly a factor in how you think, feel, act and the way others react.

UV: In your opinion, is there a Utah Valley image?
JUDITH: In Utah Valley, people take actual pride about not taking care of themselves. People are generally lazy, they don’t know how to dress and they aren’t about to admit it. They like being somewhat defiant in relation to established authority. People seem to think of dress and grooming as a safe way to rebel, but it’s not. It’s totally visible.

UV: What do you think clothes say?
JUDITH: People need to recognize that the nonverbal communicators are the elements of design: line, shape, color, texture and pattern. It’s not only what you wear; it’s how you wear it. From a distance, shape and color will be the dominant communicators. Closer up, you will see lines, patterns and texture. Warm, bright colors tend to communicate fun, friendly, happy. Darker, duller colors tend to communicate authority, organization, effectiveness.

UV: Some items of clothing have a pretty high price tag. Is there one item of clothing that is worth the money?
JUDITH: Nice clothing has nothing to do with the cost. I can get a nice pair of jeans or slacks for $11 or $11,000. I can buy a beautiful outfit in our own local stores for between $18 and $87.

UV: I’ve heard style consultants say that accessories make or break an outfit. Do you think that is true?
JUDITH: People go overboard on accessories. We need to have a cluster of clothes, a small group of five to eight pieces of clothing, each pieced distinctly different but coordinated. Add three pairs of shoes, one wallet or bag, a couple of belts, a piece of jewelry and we can come up with 40 different looking outfits. We have to be willing to invest some thought, some time and some money. It used to be families budgeted 11 percent of the income for family clothing. Now, they budget nothing. What are they doing with those dollars? They’re putting them into SUVs and eating out.

UV: Many people don’t know where to start in building a wardrobe.
JUDITH: An easy place to start in building a workable cluster of clothing would be to find a patterned piece of clothing — print, stripe or pattern — that they love to death and feel they could wear forever. Pull out the main colors and start building out a cluster with basic styles and solid colors that coordinate. It works for everybody, but everybody is different.

UV: How can someone discover his or her personal style?
JUDITH: A good way to assess your own personal style is to gather a selection of clothing catalogs. Flip through the pages. Everything you see that you say is “cute” or “darling” is going to be your approachable yin. Everything you describe as “sharp” will be organized/effective yang. If we had a continuum with both those opposites your personal style will be discovering where on the continuum you are.

UV: Is there one piece of clothing that can really change a look?
JUDITH: A jacket. It’s a third-layer piece that can camouflage and balance body bulges. Attention goes to the clothes instead of the body. Clothing sets the boundaries for social expectations and behavior. Wearing a good looking, well-fitting jacket, we tend to feel more secure, capable, confident. The jacket empowers people.

UV: What do you think of all the makeover shows on television?
JUDITH: All the television makeover shows have certainly increased our population’s interest in improvements in appearance and the actual effect on our lives. But we certainly don’t have to go about it in ways that are rude and crude. There’s nothing more fun than an everyday makeover that we can carry out ourselves.

UV: And what if there is nothing left?
JUDITH: Let’s hope that doesn’t happen. Let what’s left be the beginning piece of a new cluster of clothes. Something fun about fashion that used to be typical is that people remembered special occasions in their lives according to their memory of what they wore. Love, life and what I wore. People are insecure about the future – the economy, political stability. In times like these it works beautifully to dress just a little bit nicer. If you want to lift your mood and your feelings, the fastest way to do that is to dress up – just a little. If you want to change your life, change your clothes. It works.