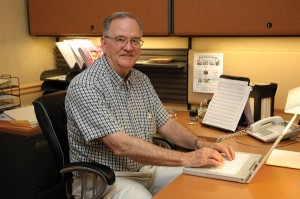 After spending time with LDS musical legend Janice Kapp Perry and her husband, Doug, a number of clichés come to mind: Their marriage is happily in tune. Their friendship hits all the right notes. Their teamwork is keyed up for success.
But the true reason for the Provo couple’s harmony comes from playing the right parts. When Janice writes music, Doug digitizes it. When she needs support, he lifts her up. And when the interview is with the less-recognized half of the duo, the melody only gets more entertaining.
“She’s here to interview ME,” Doug sings in a playful voice.
“Well that’s good,” Janice smiles. “That’s the way I like it.”

Class-ic Courtship
For the past several years, Doug has been a self-proclaimed “Mr. Janice Kapp Perry.” At various events and church meetings, it’s even become his way of introduction.
“It always gets a good laugh,” Doug says. “So I keep saying it.”
Laughter has always been a part of the couple’s courtship, which began when they had four music classes together at BYU. After admiring her piano skills, Doug asked Janice to accompany him for an assignment, and rehearsal time quickly transformed into unofficial dates.
“We’d practice the song for 15 minutes and then talk for a couple of hours over a couple of milkshakes,” he says.
But their relationship didn’t stay unofficial for long. In 1958, Doug asked Janice to marry him on March 24, gave her a ring on May 24 and married her on Sept. 24. The chorus of “24s” was a coincidence, but their future together – both personally and professionally – was anything but.
“I knew early on she would be a great composer,” Doug says. “I didn’t know any details, but I knew she would have a lot of influence.”

Doug’s Chorus
After graduating in Russian from BYU and studying Slavic linguistics in a doctoral program at the University of Indiana, Doug worked in data processing from 1968 to 1981. But Doug’s “on-the-side” work in Janice’s music business eventually grew into its own full-time job.
“When our music business got so busy it became obvious that I needed to quit and help her with it,” Doug says. “For some people it might have been difficult, but I like change and challenges.”
Doug’s main role became to engrave Janice’s music, which involves entering notes into a computer and making the sheet music publishable.
“Working with Janice is a hand and glove partnership,” he says. “She does what I can’t do, and I do what she can’t do. It’s a nice working relationship.”
That working relationship is also enhanced by separate spaces.
“We don’t actually work together,” Doug says. “She does her things and I do mine. We have a telephone system so we can page each other, but it’s usually pretty quiet.”
Other family members have since climbed on board. Children Steven Kapp Perry and Lynne Perry Christofferson have composed music of their own, and the couple’s son, John, runs the publishing company.
In the late ’80s, Doug offered his talents to outside parties by developing a company called Prime Music Engraving, which at one time had 28 employees. But Doug has since retired – sort of.
“I’m still doing the same thing except I don’t do it for other people. I just do things for Janice and the kids,” he says. “I’m retired and busier than ever.”

The Next Verse
If Janice’s past in an indication of the future, Doug’s “retired” life has no signs of slowing down. In nearly 30 years of songwriting, Janice has published 60 albums and four books of hymns and written 1,000 songs, two full-length musicals and nine cantatas. But even with her vast experience, Janice still relies on Doug for support.
“I encourage her on a daily and weekly basis,” Doug says. “She’ll often say, ‘I’ll never be able to write another piece.’ But she can and she does.”
Doug attributes Janice’s success to her innate talent and good work ethic.
“She has a remarkable ability to take a simple but profound thought and mold it to a memorable melody with complex chords,” he says. “It gives her music a unique richness.”
People all over the world have sung those memorable melodies, and Doug says the universal appreciation has been touching and rewarding.
“Every place we’ve attended church we hear people sing Janice’s songs,” he says. “For most people (her music) is just icing on the cake, but for some people it can be a life-changing experience.”
The music has been life changing for the Perrys, too. Janice and Doug are two “farm kids who know how to work,” and what emerged from that work are two recognizable identities.
“Most of our life revolves around the fact that Janice is well known,” Doug says. “But people often say the best thing about Janice Kapp Perry is that she doesn’t know she is Janice Kapp Perry.”
But Mr. Janice Kapp Perry knows exactly who he is.