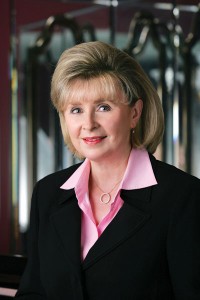 When Suzanne and Alan Osmond go out to a restaurant and are asked to give them names, they usually say “Alan” or “Suzanne” instead of “Osmond.”
“Sometimes you just want to be anonymous,” she says.

Suzanne Osmond always envisioned her life to be much like her parents’ lives. Her mother stayed at home and her father was a building contractor who also served as a Utah County commissioner.
But when Suzanne met Alan Osmond at a BYU basketball game and married him soon after, her life became unpredictable and spontaneous. Even now, Suzanne keeps a bag packed that she never unpacks — she is always ready at a moment’s notice.
Alan and Suzanne use the phrase “It’s a thrill a minute” to describe their lives.
The unpredictability was perhaps most difficult when she was a young mother. With four “babies” under age 4, Suzanne went to England for three weeks to be with her performing husband.
“All I did was make bottles and change diapers,” she says. “That was really hard, and on that trip my nephew got meningitis, so we decided to keep our children’s travels within the U.S.”

His wife, his partner
Having a famous husband requires the wife to take on several new job descriptions, including that of “buffer.”
“When people call and ask for him, I usually try to screen if it is someone who truly needs to speak with him,” she says. “We’ve had incidents in the past where people did not have pure motives.”
Through necessity, Suzanne and Alan have not always held to strictly traditional male-female roles.
“A marriage is truly a partnership, so you shouldn’t draw a line and say, ‘This is all I’m going to do.’ You work together, and that’s where you find harmony,” she says.
The Osmonds’ latest partnership challenge has been Alan’s struggle with Multiple Sclerosis. This verse of their lives has taught them compassion and patience.
“Attitude plays a huge part in it,” Suzanne says. “We may go a bit slower at times, but we’ve learned as much as we can about it and we do what we can to help it, and then beyond that we try to have a good attitude.”

Like father, like sons
Although Suzanne was a faithful supporter to her husband, she didn’t encourage her sons to pursue performing.
“It’s a very hard life,” she says. “It’s a fickle career. You are only as good as your last hit.”
However, the boys did have singing careers as “The Osmonds — Second Generation.” A TV appearance led to a People Magazine article, which led to Good Morning America, which led to a Disney pilot, which led to other opportunities.
The group had top 40 hits in England.
Suzanne and her family spent more than five years in Branson, Mo., where her eight sons did two shows a day.
“It was always a challenge keeping everybody on track,” she says. “During the school year, the homework had to be coordinated. It was also a big job to keep the clothes, costumes, food and laundry all taken care of.”
Another “family project” involved son David playing “Joseph.” (He was the understudy for uncle Donny before landing the leading role).

Multiplying
The Osmond name has always been synonymous with family. Suzanne and Alan’s 3,000-square-foot townhome fills quickly, so the Osmonds are purchasing a larger home to fit their closely knit, growing family.
“We’re up to 10 grandchildren, and I don’t see the end in site,” Suzanne says.
With Alan and Suzanne in the heart of Orem, their children come and go — but mostly come — especially during “American Idol.”
“We never know how many we’re having for dinner, so we make enough for the army,” she says. “If we don’t have a big crowd, we have leftovers.”

SUZANNE OSMOND
Age: 53
Years married: 32
Family: 8 sons (ages 16 to 30), 10 grandchildren
Best thing about being Mrs. Alan Osmond: “I married the right person, and everything is the best because of that.”
Hardest thing about being Mrs. Alan Osmond: “The lack of privacy we experience sometimes.”
Best marriage advice: Keep your spouse as your No. 1 priority in your life.