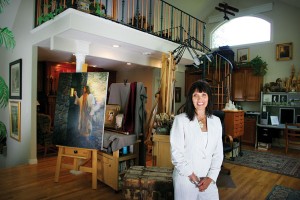 Sydnie Olsen has been a strong support to her artist husband, Greg Olsen, during their 26 years of marriage. She never had specific career aspirations of her own. “From the time I was little I wanted to be a wife and a mom,” she says

When Greg and Sydnie Olsen’s home in Mesa was in foreclosure, Sydnie suggested for the first time in their marriage that he go get a normal job. Within 30 minutes, she changed her mind and asked him to go out to the studio and paint something that would sell, Greg says.
This unwavering support and confidence in her husband’s talent has helped Greg create a colorful career that includes religious and family paintings that are well-known in Utah Valley and far beyond.

The Initial Life Sketch
Greg and Sydnie Olsen met at Utah State University where they attended the same LDS ward. Sydnie remembers walking into the bedroom of Greg’s college apartment and seeing him work on a painting.
“It took my breath away,” she says. “And I knew he was going to go places — even though I didn’t know anything about art.”
Sydnie fell in love with Greg’s gentle spirit and humility.
“When I saw how good the painting was, I was surprised at how humble Greg was,” she says. “He is so good, but he has never acted like it, and that really drew me to him.”
The couple started dating in February and got married four months later.
“And I haven’t been sorry,” Sydnie says.
When the Olsens began working on their blank marriage canvas, the plan was always for Greg to make a living through his art. Although some wives would be nervous at this prospect, Sydnie was comfortable with the idea.
“I didn’t grow up in a family where you married for money,” she says. “You married someone who treated you good and who loved you. I always felt that if we loved each other, it would work. My innocence was probably good because I had not a clue what I was in for.”

The First Draft
Although Greg is arguably the most well-known LDS painter, there have been many layers  of varying vibrance in the Olsens’ life. Sydnie kept her faith alive based largely on what others said about Greg’s paintings.
“Anytime someone would pay a compliment, we would hang onto that,” Sydnie says. “Even though I knew he was talented, it was encouraging to hear it come from other people.”
Sydnie’s own confidence in Greg carried them both through difficult times.
“Life wasn’t what we thought it would be at first,” she says. “But I always knew things had a way of working out for Greg. If it was up to me to make things happen, I wouldn’t have the confidence, but because it was Greg, I just knew it would all work out.”
And it always has. Greg has sold millions of prints and thousands of books that contain his art.

The Family
Sydnie, who grew up in Salt Lake City, and Greg, who grew up in Idaho, chose Utah Valley as the place to raise their children. They purchased their Provo home in 1994 and redid much of their house in 1995.
Greg’s art studio sits 37 steps behind their Provo home, so the couple interacts throughout the day. Sydnie buzzes him to let him know if she’s leaving, and he lets her know his schedule also.
“Our arrangement has its challenges,” she says. “If I stay in my PJs, he knows. He keeps me honest!”
Although Greg’s work is well-known, his family does not feel like they’ve lived in the public eye. Their six children are largely unaware — or perhaps unimpressed — with Greg’s fame. And the artist himself also stays grounded.
“Greg has not changed a bit from the day I married him,” Sydnie says. “Our relationship has not changed.”
Greg’s artistic notoriety has led to many public speaking opportunities. Sydnie at times has been a companion speaker, but she says the audience wants to hear Greg, and she is OK with that.
“My role is to be supportive to him,” she says.
With busy children at home, she often stays behind to care for the home front.

Artsy
Although Sydnie does not have an art background, she is still one of Greg’s most important sounding boards.
“There have been paintings where I have said, ‘This is just not right,” and it’s frustrating for him and me because I don’t have the art background to tell him how to fix it,” she says. “He’ll tell you that the hardest person to take criticism from is me.”
Sometimes Sydnie even has feedback for completed paintings.
“I look at some of his paintings and think, ‘How did that get past both Greg and me? That should have been changed,’” she says.
Through the years Sydnie has modeled for many of Greg’s paintings. Her favorite is one that is included in the book “Wherever He Leads Me.” The painting hangs in the Olsens’ master bedroom.
“Modeling is hard. It’s really, really tough, and I have great admiration for models,” she says.

Not just a wife
Living in her husband’s shadow has at times been difficult.
“If anything looks good, Greg gets the credit,” she says. “When I lived in Arizona, someone said, ‘You look so nice. Does Greg pick out your clothes?’”
Sydnie says she has learned to laugh over the years at things people say to her.
“I’ve learned that to feel good within myself, I don’t need other people to acknowledge me,” she says. “When you get to the point that you don’t need recognition from others, there is a lot of growth that happens internally.”
One instance that did bother her, however, was when she ran into one of her relatives at Hale Center Theater. The cousin immediately turned to her friend and said, “This is Greg Olsen’s wife.”
“I thought to myself, ‘You are my cousin! You should be able to call me by name,’” Sydnie says.
But these small ups and downs have all blended together to create a masterpiece of family and faith.
“Going through hard things gives you trust for the future,” Sydnie says. “When you come up against a really hard place, you have confidence that the same thing will happen that has happened before. You know there is a purpose behind the trial, and eventually you will know what that purpose is.”
Thankfully, Sydnie has noticed a pattern in their marriage that when one of them is discouraged, the other is able to stay strong.
“We each take turns being that person for each other,” she says.

New horizons
Greg recently started his own publishing company, and Sydnie handles many of the business details, including the occasional upset customer or difficult employee. Sydnie also screens Greg’s calls for him, which is not her favorite role.
“At times I have to be really firm, which is not my nature,” she says. “But I can get pushy if people put me in that position.”
But overall, her job description reads like this: supportive wife, art critic, secretary and life coach. The perks? Unbelievably high job security.

SYDNIE OLSEN
Age: 46
Years Married: 26
Children: 6 (ages 8 to 25)
Hometown: Provo
Best thing about being Mrs. Greg Olsen:  “I have appreciated all the experiences I’ve had with Greg’s art and the places it’s taken us. I’ve met lots of different people from different countries who want to meet Greg.
Hardest thing about being Mrs. Greg Olsen:  “Sometimes I’ve questioned my own identity. Sometimes I’ve questioned what I could ever offer Greg because he’s so talented. I don’t feel like I have talents, but I’ve learned to focus on the inside and share that with others.”
Best marriage advice: Communicate — especially through difficult times.