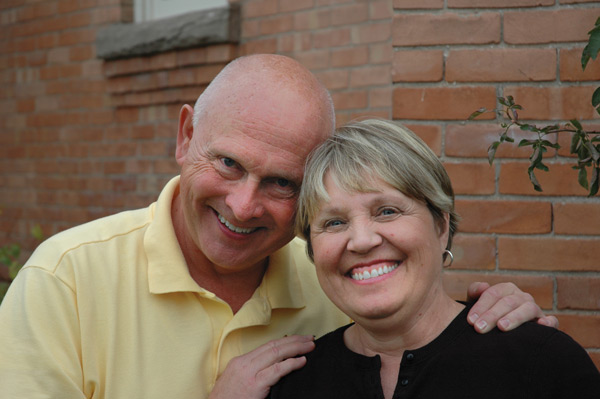 John and Sandy Rowe left their high-profile California jobs to be near their children and grandchildren.

In 2001, John and Sandy Rowe — owners of the Hines Mansion bed-and-breakfast in Provo — were enjoying their lives in California. John was a corporate legislative analyst for Southern California Edison, working in Sacramento, and Sandy was the manager of a physician’s group in Los Angeles. The couple lived in Granite Bay, Calif., just outside Sacramento, and Sandy commuted to Los Angeles.

“We were both very satisfied with our work,” Sandy says. “We both had good salaries and enjoyed living in California.”

However, Sandy’s job was taking her to Los Angeles from Sunday night to Thursday night most weeks, and John’s work kept him busy as well. The couple came to a crossroads.

“With your career, there comes a time when you’re either married to your wife or you’re married to the company,” John says. “We decided family was key.”

So the couple knew the time was right to “ease into retirement,” which for them meant moving to Utah and becoming entrepreneurs.

The San Juan Islands vs. Provo

John and Sandy had a dream of running a bed-and-breakfast in the San Juan Islands near Seattle. They envisioned selling the house in California, using John’s retirement as needed to finance the business, and then spending their golden years isolated in the beauty of the Pacific Northwest.

But then reality set in.

“People need to understand the difference between dream and reality,” John says. “Our dream was the San Juan Islands. But if we would have opened a bed-and-breakfast there, we would have lost touch with our church and our kids.”

Again, family was key, so their thoughts turned to Provo.

All of John and Sandy’s five kids live in Utah County, and they have strong LDS Church ties to the area. And ironically, the business climate for a bed-and-breakfast is more stable in Utah County than in the tourism-driven San Juan Islands.

“People romanticize owning a bed-and-breakfast,” Sandy says. “It’s a lot of hard work and when it comes down to it, there’s a small group of people who can do it.”

“We meet incredible people,” Sandy says. “That’s one of the best parts. We meet people from all over. We’ve had choice experiences.”

John & Sandy Rowe: AT A GLANCE

Hometown: Provo, moved from Granite Bay, Calif., in 2002.
Family: 5 children, six grandchildren (two more on the way)
Number of employees: Between two and five part-time employees (depending on the season)
Sandy on retirement: “Be a resource. We feel like we have so much to give because of our experience. We can help a new mother or a neighbor.”
Sandy on using local college students: “We use interns from all the local colleges. By the time they leave, they are completely ready to run a bed-and-breakfast.”
John on starting a business to ease into retirement: “People need to understand the difference between dream and reality. Our dream was the San Juan Islands. But if we would have opened a bed-and-breakfast there, we would have lost touch with our church and our kids.”
Sandy on starting a business to ease into retirement: “Do your homework and be willing to put the time in. You can’t short-change that.”

Retiring in Utah County has allowed John and Sandy to spend time with their children and six grandchildren (with two more on the way). It has also allowed them to be part of the community, both economically and socially.

When the couple decided to buy the downtown Provo inn, John and Sandy considered living in a number of areas around the county. They eventually opted for the close-knit historical district just a few blocks to the east of their business.

“Instead of commuting from Sacramento to Los Angeles, I commute a few blocks,” Sandy says. “One reason we moved there is because we felt it was important for seniors to be part of the community. We’ve been able to get involved — John is on the Provo Foundation Action Committee and we help with Winterfest. We feel like we have some input in our community. It’s been mentally healthy for us.”

John and Sandy wanted to do more than run a bed-and-breakfast. They had a specific goal they believed would lead to their financial success and their personal happiness.

“We wanted to bring old-style hospitality back to people,” Sandy says. “We wanted people to feel completely comfortable when they stayed here. It’s more work to offer better service, but people respond well.”

The Rowes have frequent guests who purposely leave snow boots or other small belongings at the inn to save from repacking each trip. Guests often say the security and comfort they feel gives them an at-home quality of sleep. And the location in downtown Provo is perfect for locals looking to get away, but not too far away.

“We have had some couples come down for breakfast and they have their children with them,” Sandy says. “Sometimes the kids just don’t make it through the night without Mom and Dad.”

The approach has worked. Since the couple bought the inn on Dec. 24, 2002, the Hines Mansion has steadily increased profits each year.

While the bed-and-breakfast keeps John and Sandy busy, their priorities with family haven’t changed.

The hard work has also helped John and Sandy enjoy life more than they would have sitting in a retirement community.

Eclipse Entrepreneur is brought to you by Eclipse Marketing, Inc., a nationwide sales company specializing in providing summer jobs for college students since 1992. Eclipse, which is based in Provo, employs more than 300 each summer.