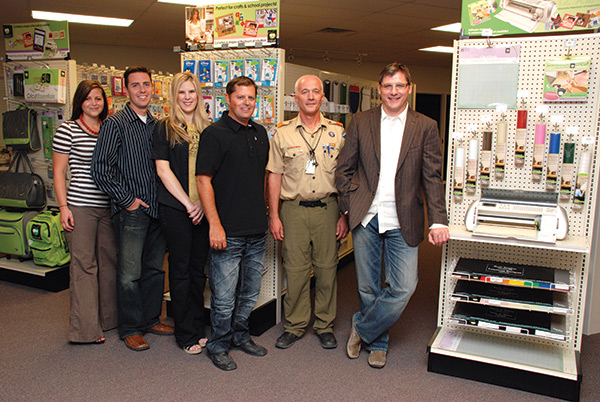 Nor does it still specialize in crafty items like paper, stickers or buttons.

But “novelty” is still accurate in the “newness” sense of the word.

In 2005, the craft industry was going through a lull. While Provo Craft wasn’t going down, company leaders felt there was still room to climb if they had the capital and leadership strong enough to do some lifting.

In 2005, representatives from Sorenson Capital contacted Jim — who was working as the president of the consumer products division for Apogee Enterprises, Inc. — and he agreed to move from Chicago back to his home state of Utah.

Dawning of a new day

“When I came out, it was pretty clear we needed to go in a different direction,” Jim says.

That’s when Robert Workman — one of the original owners of the company who continues with Provo Craft as chief executive creative officer — proposed an idea. The company should take a large, professional-grade die cutting machine and miniaturize it, which would lead to widespread distribution and sales.

What followed was the Cricut — a personal electronic cutting system that now boasts about 1 million users.

The Cricut also ushered in a change of focus to Provo Craft. Instead of being a paper, stickers and buttons company, the Spanish Fork-based venture turned into a consumer electronics manufacturer devoted to developing the best electronics for a predominately female clientele.

“We wanted to create markets, not just lead them,” Jim says. “We created a league all our own with tools and technology categories that set us apart.”

That’s been key to Provo Craft’s success. While other personal die-cutting machines exist — including some manufactured by local companies — Jim believes no one can match the Cricut.

Looking back, Jim recognizes the challenge he had in saving the company. From where he stood, there were two keys to getting the $250 million startup going: get the Cricut™ off the ground and develop a quality management team.

While the Cricut did see immediate success, Jim points out it’s the second part — bringing in the best people — that has truly been the key.

“Business leaders often say success starts with people,” Jim says. “The first thing I did (as president and CEO) was ask for an investment to hire new people. That’s counterintuitive. We paid good money to bring in quality people. That’s the only thing I’ve done right.”

From there, the good people took over. In fact, it’s hard to get Jim to take credit for much of anything other than hiring good people. He deflects praise to people like Ted Rock (chief operations officer), David Chase (chief financial officer), Brad Brusa (executive vice president of sales and marketing), Tonia Conger (director of marketing) and Jeff Coulter (director of business development).

Getting the product on shelves

Ironically, it was the relationships created by Robert that enabled Provo Craft to get the Cricut on shelves.

“Thank goodness Robert had built a good reputation with some core partners,” Jim says. “They trusted him.”

In the meantime, they study ways to make manufacturing less expensive, which makes the products more affordable to the end user. The company also studies market trends to find the right time to release new products.

When an organization that’s been around for more than 20 years gets new ownership, a new president, a new team of executives and a new product line, continuity is in question.

“Change can be hard for folks, but here folks have a desire to win,” Jim says. “Even in our economy, we continue to hire and grow — everyone likes to be part of a winning story.”

With sales at about $250 million for 2008 and revenue up 38 percent in two years, Provo Craft is winning.

As for that name?

“I think we’ll stay true to ‘Provo’ — even though I’m a (University of) Utah and Notre Dame guy,” Jim says with a smile at their Spanish Fork offices. UV

Consumer electronics primarily devoted to the craft and hobby industry

Business advice from Jim “I believe in a non-executive culture. We all have titles and responsibilities, but when we meet (as an executive committee), we check the titles at the door and feel free to have open discussion.”

It takes a family to raise a family Previous post