Home BusinessQ Magazine On The Rise 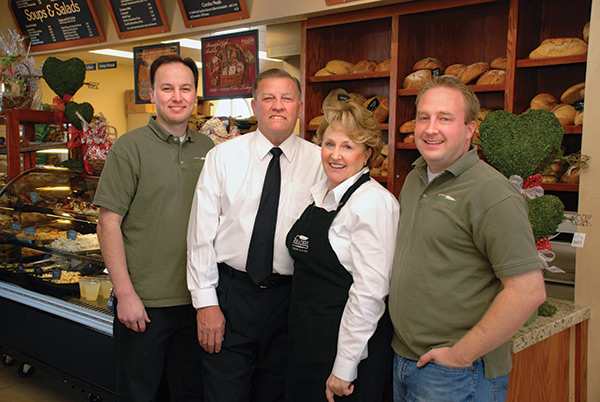 Kneaders Bakery & Café may just be the greatest thing since sliced bread. In its 12 years of business, the sandwich shop sensation — led by founders Colleen and Gary Worthington — has risen right along with its key ingredient.

Just take a look at its dedicated customers.

Before heading to the hospital with his soon-to-deliver wife, one Utah Valley man stopped at the Orem store in a hurry.

“His wife was in labor out in the car,” Colleen says. “But he said the minute she was done having the baby, she wanted a Kneaders sandwich in her hands.”

Then there’s the gentleman who endured chemotherapy — with a little chicken soup for his soul.

“During his treatments, his wife bought him Kneaders chicken noodle soup every day. So when he got his doctor’s permission to go out, he wanted to come to the store, see what it was like and thank me for all of the great soup,” she says. “It was sweet to meet him.”

Colleen describes that contagious customer connection with one word: comfort.

“We do our best to make everything comfortable — we serve comfort food, and our stores are warm and cozy,” she says. “People can buy things, but they can’t buy comfort.”

Interestingly enough, Kneaders wasn’t always in the Worthingtons’ life recipe. The couple owned nine Subway stores in Utah and Colorado for 12 years, but when Subway told them they had to start opening on Sundays, they decided to sell and go into retirement.

That is, until they actually retired.

“We got really bored in our retirement,” Colleen says. “We were doing a lot of volunteer work, which was wonderful, but we decided to look for something else to do.”

“My husband comes from a family that baked their own bread every day — they never bought a solitary loaf of bread,” she says. “Bread and baking were a part of our makeup. It just made sense.”

So Kneaders opened its Orem location in 1997, selling freshly baked European breads and pastries. Notably missing were sandwiches — thanks to a non-compete agreement they signed with the man who bought one of their Subway stores.
“Under the contract, we weren’t allowed to sell sandwiches for 10 years, but everyone kept asking for them,” Colleen says. “So we went to him six months after we opened and told him to name a price for us to get out of the contract. He did, we paid it, and we were on our way.”

And then there were eight

It’s 2009, and Kneaders is all grown up. There are now eight locations in Utah and Arizona, seven of which are franchises. The first franchise opened in Provo, and the most recent locations opened in Lehi and Arizona this past year.

“It’s really exciting to see them so successful,” Colleen says. “Each new store has the biggest ever opening, and it’s thanks to the other franchisees who have worked so hard and done well at what they do.”

But while it’s exciting to see her franchisees thrive, it’s also hard to let go.

“I once had a franchisee say to me, ‘It’s OK, it’s our baby.’ And I thought, ‘I think you adopted MY baby!’” Colleen laughs.

To make sure the adoption is in tip-top shape, she spends much of her time training the franchisees and familiarizing them with the policies and practices of the “mother store.” And when the new location is out of state, the schooling only gets more intense.

“My kids call my training at the Arizona store the ‘21 Day Seige,’” Colleen says.

Part of the Kneaders fun comes from it being a family affair. Colleen and Gary are partners with their son, James, and son-in-law, David.

“It’s great working with family,” Colleen says. “I guess it could be hard if everyone didn’t pull their weight, but we’re all really determined to carry our load. Plus, it means my little grandkids come running through the store. Nothing makes a grandma happier than that!”

And when she says they each pull their weight — she means it. Colleen is regularly seen wiping tables, taking orders at the drive-through or doing anything that requires good old fashioned hard work.

“Work energizes me,” Colleen says. “And it’s wonderful to be in a position where I can have this wonderful job and still take care of my wonderful family. They’re my No. 1 priority.”

To keep their priorities in perspective, the Worthingtons have added family touches throughout the store. In fact, one of the smoothies was named after Colleen and Gary’s “meet cute” all those years ago.

“We met and worked at BYU, and every morning when Gary passed my desk he’d say, ‘Morning, Sunshine.’ So that’s what we called the smoothie,” Colleen recalls. “Everything in the store is really personal to us.”

In a down economy…

“Be focused. Listen to what your customers say, and move forward with new ideas. Too often people cut back in hard times and get stuck — they don’t have anything new to offer. It may be important to pull back in some areas, but don’t stop progress.”

Colleen Worthington: At a Glance

What Makes Her Laugh: Grandchildren

How She Relaxes: Work (“When I’m worried about something, all I want to do is scrub the tile in the store or frost some sugar cookies in the back. That’s how I feel better.”)

Favorite Kneaders Sandwich: Turkey Bacon Avocado (“I’m with the customers on this one.”)

In Five Years Kneaders Will:  Expand. (“We’ll be about four times bigger than we are right now. I see us having 40 stores open and doing more out of the state.”)