Home Things To Do Books Going Down in History

Going Down in History 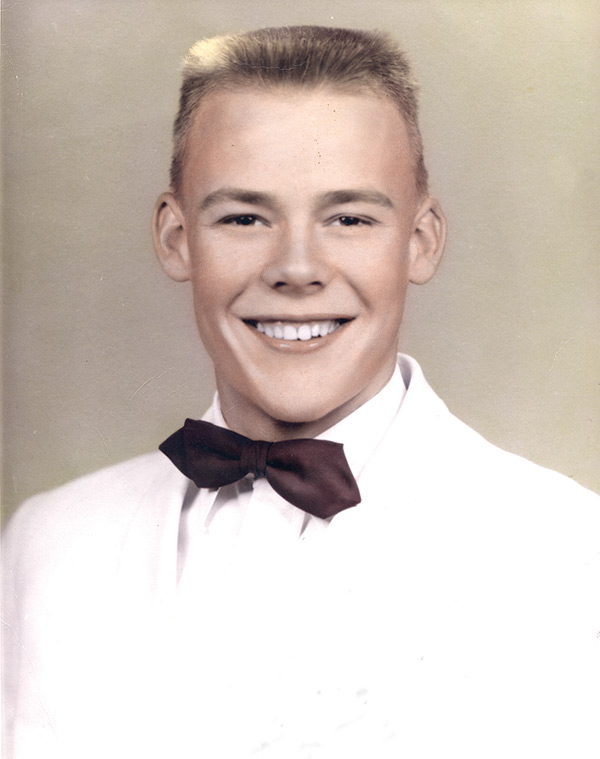 Then: As a high schooler, Gerald Lund preferred any subject over history. 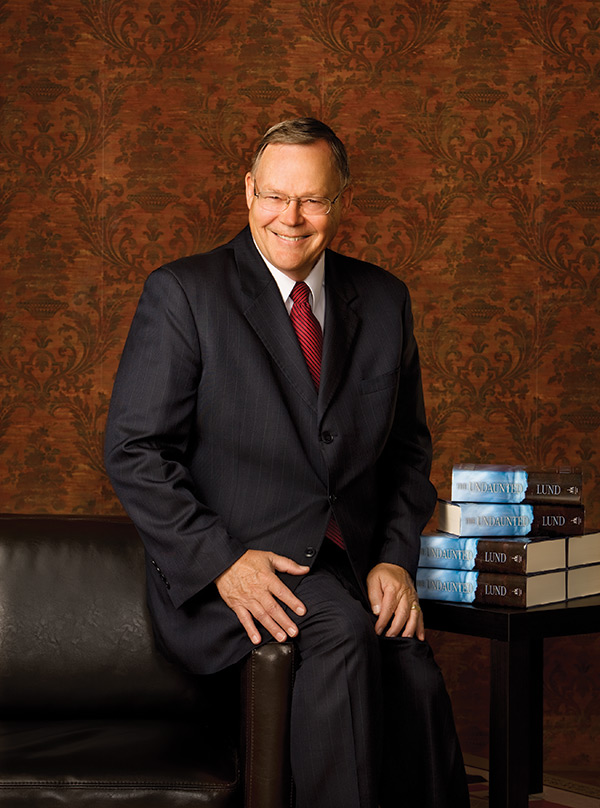 Now: Alpine’s Gerald Lund, who turns 70 this month, has just released “The Undaunted,” a historical fiction tale of the Hole-in-the-Rock pioneers.

Few people in Utah County know the “then” of pioneer history better than Alpine’s Gerald Lund. As the bestselling LDS fiction author of all time, Gerald has LDS readers wrapped around his typing fingers. His previous historical fiction titles — including “The Work and the Glory” series — have sold more than 3 million copies.

As a high schooler, history class put him to sleep. It wasn’t until an experience on his LDS mission in Wyoming that he realized the characters of the past were real people.

Now he has made history come alive for millions of readers by using fictional characters who experience true-to-history events.

Last month, he released his newest historical fiction, “The Undaunted,” which began ruminating in his mind 13 years ago. As part of his teacher training with CES (LDS Church Education System), Gerald visited Hole in the Rock in southern Utah in 1996.

“I was blown away and knew that someday the story of those pioneers needed to be told,” Gerald says.

But there were thousands of pages still to be told with “Fire of the Covenant” — and he had just started a book on the New Testament.

Then the call came in 2002 to be a general authority for the LDS Church.

“So my writing got put on the back burner for a long time,” Gerald says.

His interest in Hole in the Rock got rekindled after he heard a presentation in February 2008 by Elder Steven Snow about those who forged that trail. Again, Gerald vowed to tell the story when the time was right. He was released from the Second Quorum of the Seventy later that year, and Hole in the Rock got moved to the “front burner.”

“The deeper I dug into it, the more I was filled with respect and love and awe,” Gerald says.

No doubt his readers will be filled with the same emotions.

UV: Why did you decide to write this book?

Gerald: Very few Utahns — even those who were born and raised here — know about this story. And I was one of those who didn’t know. What gives this power is that these were real people. They didn’t think they were remarkable when they were doing it. I’m thrilled to be the storyteller, but the real credit goes to those who made the story true.

UV: What is unique about this group of pioneers?

Gerald: They weren’t fleeing persecution. They already lived in prospering Mormon communities in Southern Utah where they could worship. They weren’t coming out of poverty — most of them lived in comfortable homes and were prosperous farmers.

UV: Why did they leave?

Gerald: There was a situation developing in the Four Corners area, and there was threat of war with the Navajos again. John Taylor (then-president of LDS Church) said the only way to combat lawlessness was to send families to develop relationships. Forty-five percent of the group were teenagers or younger. Twenty percent were 6 years old or younger. It boggles my mind to think of wrestling children on the trail.

UV: Especially after spending this past week with your grandchildren!

Gerald: Right! With the pioneers there were at least 10 children in the group who were 2 and younger. Most of them were living out of wagon boxes that were 6-by-10.

UV: Why did they go?

Gerald: They believed it was a call from the Lord. And it’s a good thing they felt it was the right thing because there was one setback after another. And they kept going. That’s why I called the book “The Undaunted.” They would not quit.

Gerald: Well, in our day and age we have our own problems with unemployment, financial situations and growing wickedness. We have to have our own drive to rise to our challenges. But when I look at the pioneers, I think if they can do it, I can do it.

UV: Why has this pioneer story been largely forgotten — until now?

Gerald: Just yesterday (the day before our interview) we celebrated July 24, which is a celebration of what happened in 1847. And the stories of the handcart pioneers who came a few years later are well known. Most of us don’t think there were still pioneers 50 years after that. Jens Nielson was one of the handcart pioneers who also went on the Hole-in-the Rock journey as a 60-year-old. He was crippled from the frostbite on the handcart trail. He was asked to compare the two journeys, and he said the Hole-in-the-Rock journey was much more challenging than the handcart expedition.

UV: What item do you wish you could share with the pioneers from our day?

Gerald: Cell phones! If Brigham Young would have had a cell phone, just think how he could have solved problems. With this group of pioneers, they were almost out of supplies when they reached Bluff. Some started back and were gone three or four months. Meanwhile, children were born and wives got sick. Just think if they could have communicated with each other!

UV: What do you think we need to learn from the past?

Gerald: President Gordon B. Hinckley said it’s good to look to the past to gain inspiration for the present. As we look at their sacrifices, it can become a compelling motivation to us today.

UV: What was it like for you to visit Hole in the Rock?

Gerald: We have been there four times. There are a couple of places on the trail where you “white knuckle” your way with your ATV. And these people did it in wagons! Next time a setback comes up in our lives, we should stop crying and look at what these people did.

UV: Did you take notes when you were visiting?

Gerald: I kept a 3X5 card in my pocket so I could jot down ideas. And those notes did affect the plot. About a mile away from San Juan hill, there is a beautiful set of cliffdweller ruins. I’d been thinking I needed a place for two of my characters to “have it out.” And when I saw this, it was the perfect place. And I wrote it down. 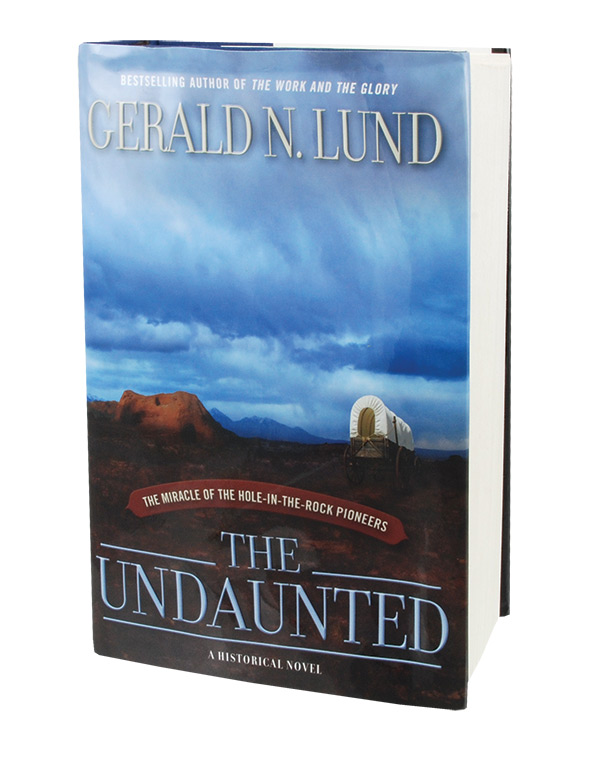 “The Undaunted” is Gerald Lund’s latest historical fiction piece. He is the best-selling LDS fiction author of all time.

UV: What type of writing schedule do you keep?

Gerald: Years ago when I started “The Work and the Glory,” I had just been called as a bishop and I was a full-time employee for CES. I found that if I set schedules on myself, I became frustrated and resentful. I’d think I would have an open night to write, and then my kids would need something or a ward member would call. I decided that writing is not the most important thing I do. And I decided to just write when I could.

UV: How have things changed since you started writing?

Gerald: I handwrote my first book, and my wife typed it on a typewriter. I thought of things I’d like to fix, but then I realized if I took out that whole paragraph, it would affect many pages. And so I wouldn’t change things. Now with my computer, I type rapidly. I make a lot of mistakes, but they are easy to correct.

UV: How does it feel when you see your finished book for the first time?

Gerald: It’s very satisfying. But each stage has its own satisfaction. I love doing the research as much as the writing. Reading journals and other histories gives me inspiration. I come across things that are so exciting to me! And I think, “I’ve got to include that in the book!”

UV: What do you do to celebrate when you finish a book?

Gerald: I lie down! (laughing) When I type the last words, my wife and I will go out to dinner. And then I go into the letdown phase, and I start catching up on all the things I’ve pushed aside. Of course, the editing phase of each book goes on for quite a period of time, too.

Gerald: This book was a really intensive push. I had a harder time with it than the other books.

UV: What do you love to read?

Gerald: I’m pretty eclectic. Right now I listen to books a lot. I just finished “Kite Runner.” I’m listening to “Wicked” at the moment. Before that I read Steven Ambrose’s story of the Lewis and Clark expedition. I also love a really good spy novel. I enjoy authors such as Eric Ambler, Robert Ludlum and Tom Clancy.

UV: What is it like to see your plots play out on the movie screen?

Gerald: In a way it’s even more thrilling to see it on screen! Just like the books, the movies have their own set of frustrations. I have learned to appreciate why they give so many different Academy Awards. Film truly is a collaborative art — much more than writing. It’s difficult to take a 700-page novel and put it into a 100-minute screenplay. But overall we were very pleased with how it turned out. I think they did a particularly good job on the casting.

UV: I’ve heard that visitors to Nauvoo often ask where the Steed house was. How does it feel to know that your characters have truly become real to people?

Gerald: That’s nice in a way. I had a lady in Deseret Book tell me one day that she almost caught herself praying for the Steeds. I’m glad the characters seem real. They seem real to me, too. Many of the characters in “The Work and the Glory” are named after my children and grandchildren.

UV: I understand your storytelling life began by making up bedtime stories for your children. I think about that when I’m trying to make up an interesting story as I tuck my kids in. It’s hard to do!

Gerald: My kids still remember the stories I told them. And now I tell them to my grandchildren. I love to tell a story.

UV: Have you always loved history?

Gerald: I hated history in high school. But when I was on my mission in Northern Wyoming, I was asked to conduct a funeral for a member who was a war veteran. He was buried at the Custer Battlefield, and as we walked through the markers on the field I began thinking of the real people who fought. They were terrified, and they knew they were going to die. I realized history was about people. That changed things for me.

UV: What questions do you get asked frequently?

Gerald: People often ask when I find time to write. I say, “You don’t find time, you make time.” Now that I’m retired, time is easier to find.

UV: What are your plans now?

Gerald: My own family is asking me that now. “What’s next?” I’ve got all kinds of things percolating. Over the years I’ve learned not to start worrying about something until I’ve finished the present project. I’m also going to go down a couple more times on the trail. I love the Hole-in-the-Rock story. UV 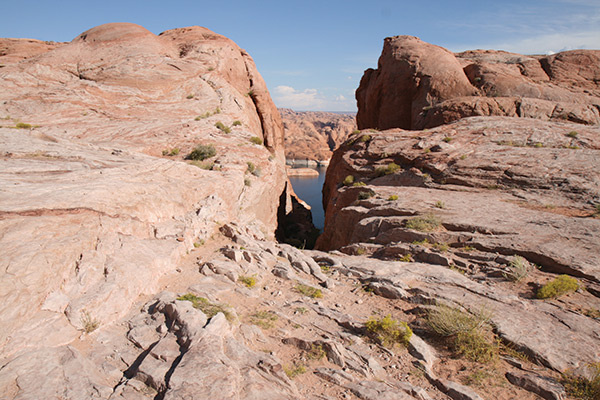 Then: In October, it will be 130 years since the Hole-in-the-Rock pioneers left on their journey to forge a trail and a settlement in the present-day Lake Powell area. 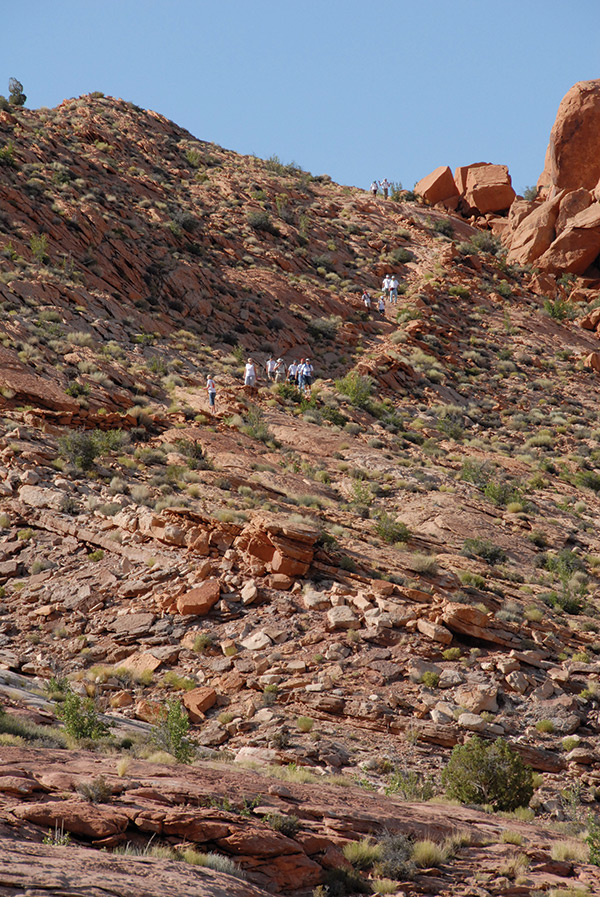 What I learned when the Spirit took me on a detour