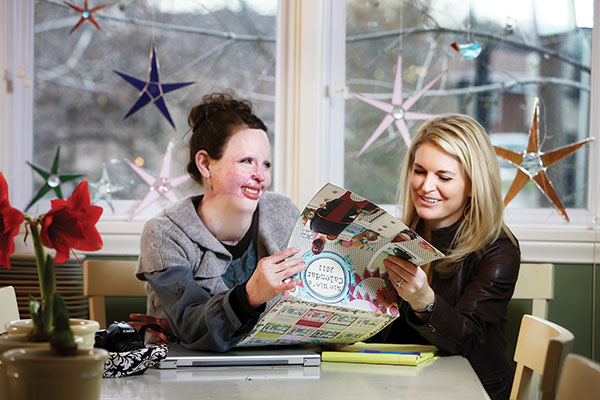 But even if you don’t know the details of this digital darling, you know her. She’s your sister. She’s your neighbor. She’s you. And that’s the charm of her daily blog — real life with its misspellings and missteps — mixed in with doctor’s appointments and decor projects.

I got a glimpse of her real life during our real live interview on her living room couch the day before she flew to St. Louis for Thanksgiving. As a nieniedialogues reader, I already knew her holiday plans — and what happened to her yesterday. So much for small talk.

Youngest son Nicholas (he’s just as cute in real life) ran circles around us and then wanted to boil an egg. Right now. Stephanie handled him with patience and love — and with a laugh when he announced that he broke the egg in the sink.

She has a perspective that’s head and shoulders above other 29-year-olds with their skin intact. And that’s why readers logon with regularity to deepen their one-sided friendship. One such reader happened to stop by Dear Lizzie where we were picking outfits for the photo shoot. The reader excitedly introduced herself, and within 30 seconds this passerby was calling the blogger “Steph.” In her mind, Stephanie was a long-time friend.

And Stephanie feels the same closeness with her newly-met followers. She knows their prayers have helped keep her alive, and now she lives to spread positivity to readers worldwide — and to boil eggs for Nicholas.