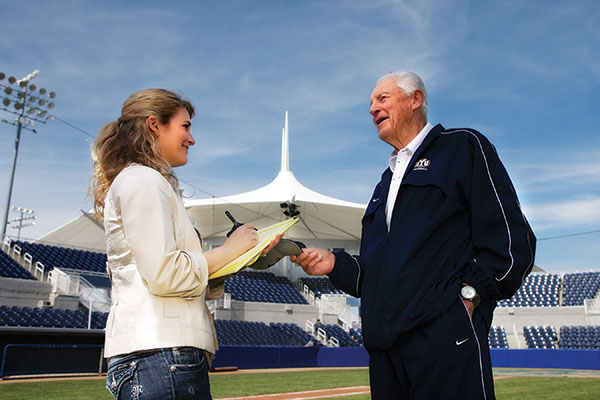 I didn’t realize I had requested an interview with Vern Law during an away game for BYU baseball. This former major leaguer plans his schedule around the Cougars. He’s a regular at Miller Park in Provo (across from the Marriott Center), and he travels to as many away games as he can to watch his son Vance coach and his grandsons play.

Vern was listening to a mid-March game against Oregon on the radio when I knocked on his Provo door, and the score was tied in the second inning.

After I realized the conflict, I offered to come back. But being the lady and gentleman that VaNita and Vern Law are, they sat me comfortably in the living room where Vern and I could visit. VaNita waltzed in every few minutes indicating the score with her fingers. But we didn’t need to see the score to know whether BYU was up or down. Her face gave that away.

Even though VaNita is maybe five feet tall, she’s a giant of a baseball supporter  — and a wife. Family relationships lead to success and happiness in the Law family, and that’s the roster Vern cares most about.

Two weeks later when Vern and Vance met us at the baseball park for an April photo shoot, it was clear this father-son duo has a shared love of baseball but also a shared respect — both for each other and for others.

Vern and I were the last to leave the field, and we both slowed down when we reached a puddle created by Mother Nature’s recent fury.

Vern said, “If I were a true gentleman, I’d lift you over that.”

But I didn’t want to make an 81-year-old heave me and my equipment over a small mudhole. But everything I had learned and observed about Vern told me he would do it if I asked.

Talk about a father figure.