The Haws basketball legacy: A dad, two boys and a ball 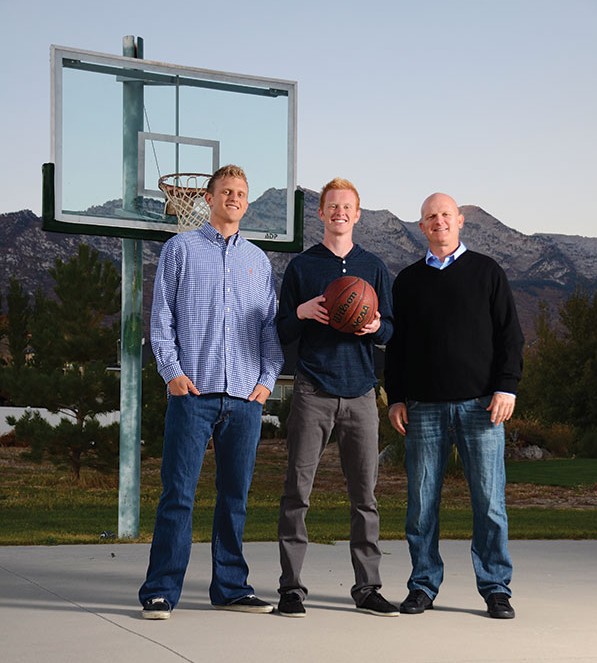 Starting when he was 11 years old, Cougar standout Tyler Haws and his father, Marty (a BYU basketball legend) started summer mornings at 6 a.m. in their local church building.

The pair would count the makes. Eventually, they would only have to count the misses.

As younger brother (and recent BYU commit), T.J. grew up, he joined the workouts.

This past summer, the workout usually consisted of 700 shots (300 two-pointers, 300 three-pointers and 100 free throws), followed by some one-on-one. 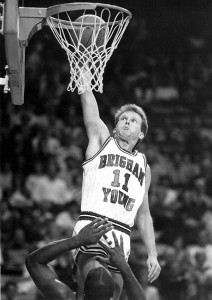 Marty Haws was known for his ability to get to the rim — using his speed and quickness to blow past defenders. (Photo courtesy BYU Photo)

The early morning workouts began when pre-junior high Tyler told his dad he was interested in doing what it took to be a great basketball player.

Marty expressed his expectations that Tyler — and later T.J. — would work hard and give maximum effort to get the most out of their respective talents.

As a prep athlete at Hillcrest High in Salt Lake City, Marty was a four-sport athlete (basketball, football, track and baseball) who had the speed and skill to play basketball or football at numerous colleges around the country. However, basketball was his first love, and in 1984 he signed with BYU and coach Ladell Andersen.

After serving an LDS Church mission, Marty worked into the starting line-up as a freshman and then started every game his sophomore, junior and senior seasons. His senior season, he led the Cougars with 18.5 points per game.

However, it was what BYU did for him off the court that means the most.

“What BYU did for me, as much as anything, is give me the chance to be around so many good people,” he says. “I was around successful people with successful families. It laid a foundation for what I wanted in my life.”

One of those “good people” he met was his wife, Tiffanie. 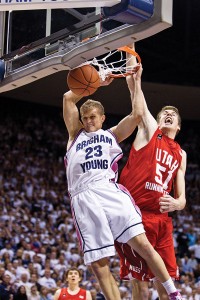 Tyler Haws dunks the ball in a game against BYU. (Photo by Jaren Wilkey/BYU)

Tyler — like his dad — was involved in several sports when he was younger but always felt an extra pull to the hardwood.

“Dad was never one to push me toward basketball, but my grandpa would show me old tapes of Dad’s games at BYU, and it was something I was drawn to,” Tyler says.

Marty points out that Tyler always had good size and was tireless in the gym. BYU fans saw this combination pay off in Tyler’s freshman season when he played with Jimmer Fredette and Jackson Emery. He was named third-team all-conference as a true freshman and averaged 11.3 points per game, 4.2 rebounds per game and started 33 of the 35 games he played in.

The Cougars will expect even more from Tyler during the 2012-2013 season.

“T.J. is the classic little brother,” Marty says. “There’s a bit of an age difference between the boys (four years), but T.J. always believed he should be out there playing with Tyler and his friends. He’s always thought he was good enough. That’s what’s helped him as much as anything. He feels he belongs on any court he’s on.”

This tenacity led to T.J. playing varsity basketball at Lone Peak High School as a freshman, and he was one of the state’s best players by his sophomore season — which is also when he committed to join his brother (and father) and don a Cougar uniform.

“As I was going through the recruiting process, my dad said this was the time in my life to be selfish,” T.J. says. “I had some other options, but I felt really comfortable about BYU. If it felt right to me, I didn’t see a reason to waste my time and other colleges’ time by considering other schools.”

Initially, T.J. was excited to play his freshman year at BYU with Tyler and then leave on a mission. However, the day after our interview, LDS Church president Thomas S. Monson announced 18-year-old high school graduates could begin missionary service. Now, T.J. is undecided on the timing of his BYU career’s commencement.

Both Tyler and T.J. agree that their dad’s background in basketball has been a big part of their development.

“My dad has been a major influence ever since I was a kid,” Tyler says. “He’s been my mentor, he’s evaluated my game and he is one of my best friends.”

“The early morning workouts are some of my best memories of them growing up,” Marty says. “We got to spend so much time together around something we all enjoy. We learned a lot from each other and got really close.”