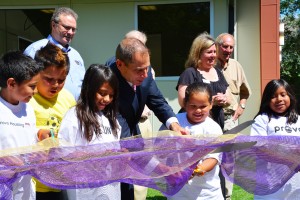 PROVO — The Boulders community has been waiting for the completion of South Franklin Community Center since the building’s groundbreaking on April 24, 2012, so it could have a home for its service programs. Now the wait is over.

Mayor John Curtis joined kids attending the United Way’s day camp to cut the ribbon for the South Franklin Community Center Tuesday afternoon, which should be in full operation within a week.

“I believe this event is very, very symbolic for our city,” Curtis said. “And the reason I say that is as the success of our city goes, we cannot be successful without this being successful.”

The Boulders, a neighborhood made up of 388 units, rents to low-income individuals with many of those units being subsidized. City leaders hope to link Provo residents throughout the community.

“We can imagine radiating from all the walls and the roof of the building invisible lines, and not just into the local Boulders community or the South Franklin community,” said Hal Miller, a Provo city council member, “but farther on into the Provo community emblematic of the partnership that has been referred to already.”

The partnership started with volunteer efforts. According to Kena Mathews, executive director of Utah County’s Habitat for Humanity, there were more than 1,000 volunteers that provided  3,500 hours of service. Volunteers accounted for 60 percent of the labor on the South Franklin Community Center.

Leann Hillam, Habitat for Humanity program coordinator, was in charge of organizing the volunteers, and  was impressed at the dedication of all the volunteers.

“We had volunteers sweating and icicles dripping from their nose,” Hillam said. “They would warm themselves by the propane heaters and get back to work.” 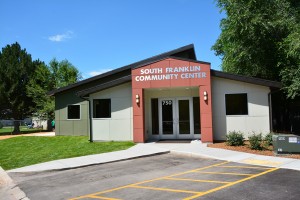 The South Franklin Community Center will serve The Boulders community in providing programs to help people of all ages obtain life skills. (Photo by Rebecca Lane)

Volunteer labor was also given by those who will benefit directly from the center’s offerings. The center sponsor after-school tutoring, computer, life skills and healthy cooking classes, exercise classes, recreational activities, a Neighbor to Neighbor program and more.

“We want to build this community — build from the inside out and that’s exciting,” said Bill Hulterstrom, United Way of Utah County CEO.

The building from the inside has already started as members from The Boulder’s community service group “Neighbor to Neighbor” joined in the efforts to build the center. Jennifer Steele is one of those volunteers from The Boulders.

“I’m really glad they are almost done now because we’ve been waiting,” Steele said. “We have a food class that we’ve been waiting to teach the residents. You’d be surprised how many people don’t know how to cook here.”

Steele said the location the group has been using for these healthy cooking classes is up a stairwell, which is difficult for some of the disabled community members to get to, so they can’t attend the classes.