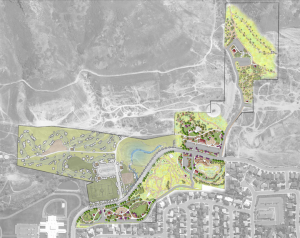 The plans for Slate Canyon Park will be stretched out over four phases. (Photo courtesy Provo City)

PROVO — Residents will have an opportunity to preview and provide feedback for Slate Canyon Park’s design Thursday, Aug. 1 at 6 p.m. at the Provo Recreation Center.

Click here to view detailed designs of the park now.

“It is mainly to be a meeting where people can informally take a look,” said Doug Robins, Provo parks division director.

“This is the second public input meeting we’ve had,” Robins said. “The first one was in Slate Canyon nieghborhood and the neighborhood was invited to come in.”

The committee made some adjustments from suggestions made at that meeting. Thursday’s meeting is a follow-up meeting to see if there are any other adjustments that need to be made.

Robins and the Slate Canyon Park committee say feedback received in the meeting will help finalize the project allowing construction to begin this fall. Construction will start at the mouth of the Bonneville Shoreline Trail.

“Our staff is really excited about his concept plan,” Robins said. “We are excited to share it with the general public and get started with it this fall.”

The Slate Canyon Park design includes several improvements to what exists today, including safety features for bikers and improved roads accessing the park.