Home Things To Do Events 4 tips for viewing outdoor movies 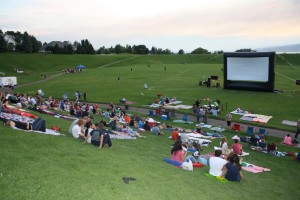 There are movies in the park showing at dusk throughout Utah Valley during the month of August. (Photo courtesy Eric Layland)

The end of summer vacation is practically here, but many Utah Valley parks and theaters aren’t ready to surrender to the rigid school year schedule. Through August, different organizations will be hosting outdoor movies late into the night.

Provo’s Recreation Coordinator Eric Layland provided tips on how to make your evening at Provo’s Movie in the Park (or at any outdoor movie showing) more enjoyable.

“Coming early is great,” said Eric Layland, Provo’s recreation coordinator. “People will start showing up even three hours early to the park. The people that have the best experience will be there early and kind of make a night of it.”

By showing up early, the best spots are still available and the evening can be more relaxing instead of pressed for making the opening credits. Plus, there is pre-movie entertainment.
Another added bonus to showing up early is the pre-party. At Rock Canyon Park in Provo, they set up Just Dance Wii on the big screen 45 minutes before the movie starts. Layland said they’ve had as many as 50 people dancing at one time.

The seating is mostly on the hill at Rock Canyon Park, so people with chairs don’t have too much space to set up. However, those with blankets have a whole hillside that they can set up camp on.

3. Bring bug repellent and a jacket

Even though cities spray their parks for mosquitoes, the bugs still bite at night. Bug repellant will prevent becoming a mosquitoes midnight snack. Also, despite the hot summer days, the nights will start to cool down, so a jacket or an extra blanket will make the night a little more comfortable once the sun goes down.

There will be some cheap concession snacks available to purchase at the movies in the park including popcorn, drinks and candy.

To see a list of outdoor movies showing in Utah Valley for the month of August, click here.