Home Things To Do Stage ‘The Scarlet Pimpernel’: A master of humorous disguise

‘The Scarlet Pimpernel’: A master of humorous disguise 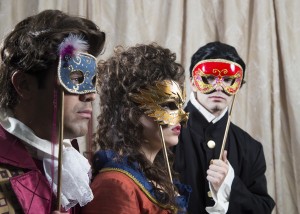 Michael Dubois (Percy/Pimpernel), Lorell Frank (Marguerite) and Bryan Thacker (Chauvelin) are some of the main characters for the SCERA Shell Outdoor theatre’s production of “The Scarlet Pimpernel.” (Photo by Mark A. Philbrick)

One of the first masked men that hid in plain site has snuck his way on stage once again at the SCERA Shell Outdoor Theatre.

“The Scarlet Pimpernel,” a classic musical based on the book by Baroness Emmuska Orczy, explores the Reign of Terror following the French Revolution through the fictional character Percy Blakeney.

“For me it is a character and it is a role that I’ve wanted to do before,” said Michael Dubois, who plays Percy Blakeney/the Scarlet Pimpernel half of the nights. Stephen Gashler plays the hero on the other nights.

“The reason I love this character is he is very complex,” Dubois said. “As far as I’m concerned, Percy is the original superhero of the theater.”

A superhero, that is, that isn’t known for pulling out the coolest gadgets, but merely relying on his wit and acting abilities.
“The humor of the show is really unexpected,” Dubois said. “Percy himself is a very masculine person, but the Scarlet Pimpernel that he plays to fool people is very feminine.”
This hero saves people from the guillotine, but cleverly disguises himself as the Scarlet Pimpernel to walk in his opponent’s presence. Chauvelin, Pimpernel’s counterpart, represents the French revolutionaries and does everything he can to stop Pimpernel.
“The reason I’m so attracted to the role is it isn’t everyday that you get to play a villain, and a villain that is so complex,” said Bryan Thacker, who plays Chauvelin. “His songs show much of his inner conflict as a character. He can laugh and dream and grow too.”
The show balances the conflict between Chauvelin and Pimpernel as well as adding in Percy’s love interest, Marguerite, who is double cast with Lorelle Frank and Kelsey Thacker.
“The show itself is unique in that it does a really good job of balancing the drama with the comedy and really showing the emotions that we show and live for,” Thacker said. “It does a really good job of tying the show together with a tear for every laugh.”

Director Jerry Elison chose to direct “The Scarlet Pimpernel” because he had only directed it once before and wanted to see what he could do new with it. Elison said that the set is “beautifully designed” as are the music and choreography. All of these factor into a show that Elison believes will leave everyone “thoroughly entertained.”

“We did it … for the volunteer workers that work in the SCERA that aren’t paid,” Elison said. “We did it for those employees and we had an electrical problem so we didn’t get to start until 9 p.m. and they all stayed. Evidently they liked it because they stayed for the whole show.”