The best of BYU’s Saturday scrimmage in photos. The scrimmage took place on Aug. 10 at LaVell Edwards Stadium in front of about 10,000 fans. 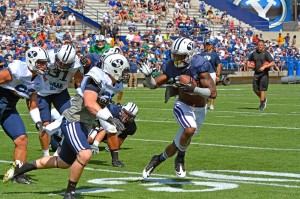 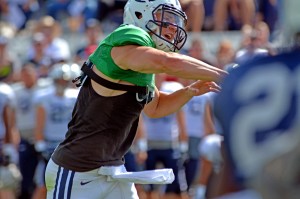 Originally recruited as a tight end out of Bingham High School in Salt Lake, Remington Peck is now expected to make a major impact on the defensive line. 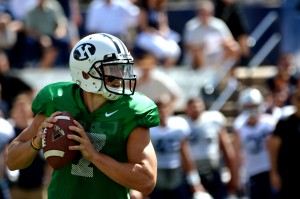 Christian Stewart, a 6-foot-2 quarterback transfer from Snow College, gets ready to fire a pass. Stepping into the shoes of nose tackle Romney Fuga is a big task for anyone. So far during fall camp Marques Johnson is doing a good job of it. 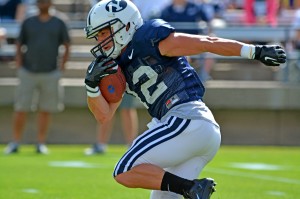 JD Falslev, a 5-foot-8 wide receiver from Smithfield, Utah, practiced catching and running many punts on the day. 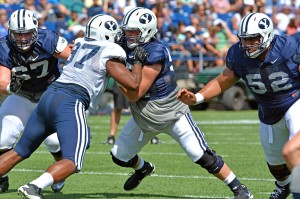 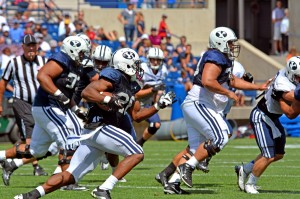 Runningback Adam Hine had four carried for 14 yards. One of those carries was a 2-yard TD run through a hole wide enough to drive a Chevy through. 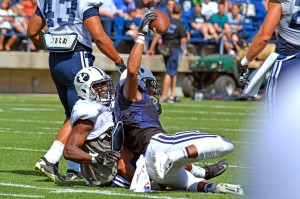 Receiver Ross Apo made this reception, good for six yards. 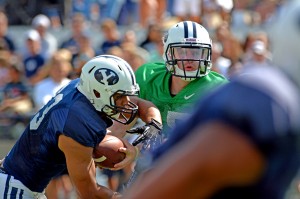 Mike Wadsworth (#30) returns an interception for the only defensive touchdown of the day. Wadsworth, a 6-foot-1, 205 pound sophomore is a transfer player from the University of Hawaii. About 10,000 fans attended the 10 a.m. scrimmage at LaVell Edwards Stadium. 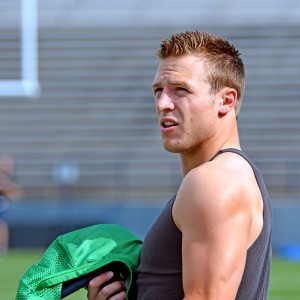 Taysom Hill, a 6-foot-2, 221-pound sophomore from Pocatello, Idaho, puts on his pads before the scrimmage. Cedric Dale, a 3-star runningback and cornerback from Hebron High School in Carrollton, Texas, attended the scrimmage Saturday with his dad. Ross Apo, a 6-foot-3, 207-pound junior from Arlington, Tex., celebrates after the scrimmage.

The entire Cougar team huddle at the end of the scrimmage. Even these young fans were caught up in the action of the scrimmage.