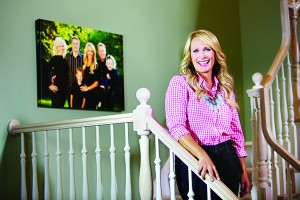 Julie de Azevedo Hanks is known for singing her heart out on CDs and in firesides — and now she is listening her heart out to women and families who visit her three-location clinic, Wasatch Family Therapy. This women’s-self-care evangelist is releasing her first book — “The Burnout Cure” — this summer, with advice for how to say no and what it means to do your emotional family history. Julie appears regularly on Studio 5 and has shared mental and emotional health advice with The Wall Street Journal and Discovery Health.
“In my extended family, we’ve seen it all — divorce, teen pregnancy, suicide, homosexuality, depression,” she says. “Life has a way of teaching us to get real.”
Julie’s “real life” includes raising four children while raising awareness of real emotional health issues in the LDS culture. (Spoiler alert! It’s not happy valley for everyone.)
(Photo by Kenneth Linge)

Julie de Azevedo Hanks began her life’s song in a musical family of nine siblings and a father (Lex de Azevedo) who is a Hollywood composing legend and wrote the soundtrack to 1970s LDS culture with “Saturday’s Warrior” and “My Turn on Earth.”

Julie added to the chorus by producing her own 10 CDs with popular tunes such as “Hands of Heaven,” “Window to His Love” and “Mercy’s Arms.” (Five of her songs were named top 100 greatest LDS songs of all time by LDS Living magazine.)

But this 44-year-old therapist and Ph.D. student is writing a new verse as she teaches women to avoid the rhythm of burnout. In surveying thousands, she found a common off-key belief — that the solution to depression is to do more for others. In reality, staying in sync with their own emotional needs just might save women from losing their music.

As a teenager at North Hollywood High School, Julie hit a patch of unhappiness and her parents asked if she’d like to talk to a counselor.

“I wasn’t feeling like myself, and this gave me a place to go and vent and talk through my emotions,” Julie says. “It was extremely helpful, and it opened up a whole new world for me.”

Julie had already adopted the role of caretaker as the second oldest sibling, and her interest in family dynamics and relationships was fueled by her own positive therapy experience.

Fast forward a decade, and Julie was in her 20s with two children  — and within arm’s reach of a bachelor’s degree in psychology at the U of U. Her famous parents announced they were getting a divorce.

“It was the hardest thing,” she says. “I struggled my way through the demise of my parents’ marriage.”

Fast forward 18 years, and now Julie helps women knee-to-knee and TV-screen- to-blog-post with issues including divorce, abuse and depression. A lot of depression.

In her three locations of Wasatch Family Therapy, Julie and her 18 counselors see patterns, problems and solutions. A lot of solutions.

In fact, Julie’s soon-to-be-released book uses the word “cure” in the title. She identifies 20-plus myths adopted by our religious culture that add to our culture of depression — including the mistaken belief that “struggling with emotional, mental or relationship problems is a sign of personal or spiritual weakness.”

The truth? Struggling with children or marriage does not signify weakness or lack of spirituality ­— it signifies humanness, Julie says.

“If we have a sore throat, we don’t see it as a reflection of where we are spiritually,” she explains. “We don’t assume we can easily fix our pancreas by praying harder. And if we make an appointment with an accountant, we don’t rush in hoping nobody sees us.”

Julie wants everyone to see her passion for changing Utah Valley’s view on seeking help for mental and emotional health.

The genesis of “The Burnout Cure” (to be released next month by Covenant Communications in American Fork) came more than a decade ago when Julie was asked to do a workshop on mental health for her LDS ward. In preparation, she surveyed her Relief Society about mental challenges they had faced and whether they had sought professional help (her own years of research show 31 percent of LDS women have seen a therapist).

“My goal was to normalize the trends so that the women realized they weren’t alone in their challenges,” she says. “I wanted them to realize they could have real discussions with their friends and be there for each other in a more meaningful way — because if your husband just left you or if you found out your kid is dealing drugs, a casserole isn’t going to cut it.”

This first workshop led to hundreds more, with women completing her survey each time, which prepared her to address the group’s specific needs. More than 3,000 surveys later, Julie realized she had some data. And a book to write. And a culture to change. But first, she had to take care of herself.

Julie gets it — women are busy. She has her own to-do list humming with roles of mother, wife, business owner, student, homeowner and songwriter. But Julie is a self-proclaimed women’s-self-care evangelist, and she practices what she preaches.

“I require my kids to work around my schedule as much as I work around theirs,” she says. “We are a family, and we are all equally important. I want my kids to see me as an individual instead of just as the mom whose only purpose is to meet their needs.”

When Julie is away doing concerts, media opportunities or speaking engagements, Jeff runs the carpool and takes pictures at the football games.

She and her CPA husband hammered out their relationship as young college students (Julie was 20 when they married).

“Marriage and family are extremely important to me, and so are having options,” she says.

Julie’s fetish with options and distaste with deadends began as she watched her mother and other grown women from her teenage viewpoint; she perceived them as having a lack of options and not feeling powerful in their own lives.

“That’s not going to work for me,” Julie decided.

She set out to create a life that would include all of her loves — music, family, mental health, education and relationships (even the non-family kind).

Her secret to running crazy without going crazy? Think like a man.

“When I feel overwhelmed and need support, I ask myself, ‘What would a man do?’” Julie says. “A man would hire an assistant. So I hire an assistant. I don’t want to spend eight hours of my week cleaning when I have other passions.”

Although Julie’s schedule is dotted with media appearances and lacrosse game appearances, she knows when to say no.

When asked to add something to her schedule, Julie asks herself, “Does it sound energizing or draining?”

While she used to be a people pleaser, Julie learned as a college student that she couldn’t do it all. She was producing her first cassette and was asked to perform and speak in between group projects and lab sessions.

“I was trying to enjoy college life and meet everyone else’s expectations,” she says. “I realized it wasn’t going to work.”

In fact, Julie believes it’s prideful to believe you have to say yes — “that means you believe nobody else is capable of doing it, and that’s not usually true. I had a steep learning curve myself, but I found out I cannot please people at my own expense,” she says.

However, Julie is pleasing producers and viewers alike. Her training as a performer prepared her for a life in front of the camera — with this verse being about mental health and relationships. Julie regularly appears on Studio 5 with topics ranging from how to handle a narcissistic mother to assessing your child’s self-esteem. Her list of national media interviews includes Cosmopolitan and CNN. She also appeared on the reality TV show “Secretly Pregnant,” where she counseled a Utah woman who was six months along and hadn’t told anyone.

Julie’s favorite word of 2013 is “integration,” which is the definition of health.

“In the past, I kept my therapy and my music separate — I didn’t want my clients to know I sang,” she says. “But we are whole beings. Everything interacts.”

When Julie speaks, she often sings — especially since her music tells her life story. For example, “Ships in the Night” describes a busy married couple.

“I wrote that after we had a couple of children and I realized there is so much good to be done at church and everywhere else, but am I taking care of my marriage?” she says.

The answer to that question isn’t simple and it shouldn’t be.

Julie encourages using the phrase “more often than not.”

This phraseology gets herself and others past the perfectionism affliction.

“I realized a long time ago if I had to be perfect, I would never do anything,” she says.

Another one of Julie’s secrets to success is allowing herself to move slowly along multiple tracks. Julie has been going down paths with her music, her therapy, her graduate work and her book.

“The things happening in my life right now are the result of decades of work as I’ve plugged along on several tracks,” she says. “I don’t do things quickly.”

Julie got her clinical license the month she had her third child — what normally takes two years took her seven years. She then opened Wasatch Family Therapy as a solo practice in 2002. The immense need drove growth, and she has watched the culture progress to more fully accept professional counseling as an option.

“The best gift you can give your kids is to deal with your own stuff,” she says. “Traumas don’t just go away, they will come to the surface.”

Julie gave herself a gift by learning to avoid taking on others’ issues as her own.

“It actually does them a disservice when we try to take on their problems,” she says. “It tells them we don’t trust them with their lives when the message most people need to hear is that they can handle this.”

This principle holds true for all of us in our varied relationships — Julie says we should show trust that others can get through their challenges. And we should also acknowledge emotional pain.

“Culturally, we tend to shut down emotional pain,” she says. “Pain is a signal — whether physical pain or emotional pain. Pay attention.”

Julie is compelled to speak out — primarily to LDS women — because she sees them minimizing themselves in their own lives.

“We all deserve to have joy and to have passion,” she says. “And I support women in being the boss of their life — whatever that looks like for them. We can’t compare and we can’t judge.”

As her own boss, Julie has rewritten her job description to be less about music and more about mental health. She performed a rare concert in February at Brigham’s Pianos in Pleasant Grove with her father accompanying her on the piano.

“I played the guitar, which I picked up later in life,” she says. “I’m not a technical musician, but people seem to like hearing my songs from my voice. In the concert, I forgot about the best chord change, and I just kept going over and over it trying to find it.”

Her fans told her they loved watching her model that it’s OK to be imperfect. Which fits into Julie’s goal to live a full and non-burned out life and to teach others to do the same.

More often than not, she’s wildly successful at both.