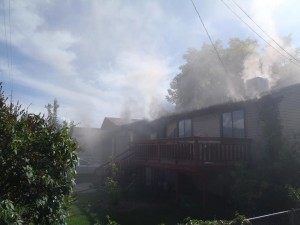 The house fire in Provo was started by smoking materials. Louise Dennis Massey, a 70-year-old woman, was killed in the fire. (Photo courtesy of Provo Fire Department)

The Provo Fire Department received a call at 4:35 p.m. Wednesday afternoon from a neighbor reporting smoke spilling out of the split-level home at 1362 S. 1100 West in Provo. Three different stations with about 20 firefighters arrived on the scene within four minutes of receiving the call.

Neighbors informed firefighters that Massey, a 70-year-old woman, lived upstairs and had limited mobility after suffering a number of strokes in the past.

Firefighters found Massey lying on the floor in her living room.

“It is hard to speculate if she had gotten up and tried to escape the fire,” said Dean York, captain at the Provo Fire Department.

The fire was out within 10 minutes of firefighters arriving at the scene.

“The fire was put out really quick,” York said. “It was a great respond time, but unfortunately we don’t know how long the fire had been burning prior to the phone call.”

There is about $200,000 worth of structural and smoke damage to the home. Massey was the only person home at the time of the fire — her son and two grandkids who live in the basement were not home at the time.