Man in custody after Provo standoff 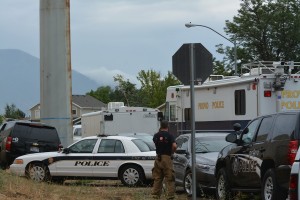 A Provo fireman makes a call after a man was taken into custody Friday afternoon. (Photo by Rebecca Lane)

PROVO — A Provo man is in custody after a standoff with Provo’s SWAT team Friday morning.

At about 9:30 a.m., Provo Police responded to a residence around 680 W. 1100 South in Provo where shots had been fired. Upon arriving at the scene, Provo police learned the man was intoxicated and was upset over marital problems. The man went into the backyard and shot five rounds into the ground.

“We set up a perimeter just to be safe,” said Lt. Mathew Siufanua with the Provo Police Department. “We called our SWAT team out because there was a gun used. We evacuated the residents in the area because we didn’t want them to be harmed in any way.”

Police first tried to contact the man through a PA system, but when he didn’t respond they used a robot. The man heard the robot and came outside without any further incident.

“When it comes to situations like this, safety is always the No. 1 goal,” Siufanua said. “In this case, we were lucky enough that everybody’s going to walk away and everybody is safe.”

The man was in custody at about 1 p.m.