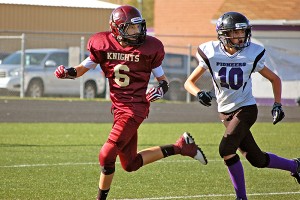 The eighth grade Lehi football team, coached by Cole Cooper, hiked to the top of Mt. Timpanogos on Aug. 14, 2013 as a team bonding activity. Each member of the team took a turn carrying a football to the top.