Home LDS Being LDS Faith of our fathers (and mothers)

Faith of our fathers (and mothers) 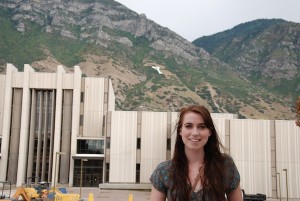 At the start of her freshman year at BYU, Hannah Wheelwright decided to read through the entire LDS standard works from cover to cover. As a member of a devoted Mormon family, she had read the scriptures closely during her growing-up years in Northern Virginia. She had come to believe God is real. But just three days into her new reading endeavor, Wheelwright was stopped cold by a verse in Genesis.

“On this particular night I started reading chapter three, and it was when I got to the end of verse 16 where the Lord tells Eve that Adam will rule over her,” Wheelwright said. “I remember just stopping and staring at the pages of my scriptures, and I had to ask what that really meant. I remember praying to know whether women are extremely important and integral to Heavenly Father’s plan, but maybe they really are just a little bit less. Maybe women really are just second class citizens.”

Like any diligent Latter-day Saint, Wheelwright studied and prayed. She read from the scriptures and from conference talks and from church historical documents. But she wasn’t satisfied.

“I really struggled to see what my role was supposed to be besides bearing and caring for children,” Wheelwright said. “From a very young age I felt that I had a lot more to contribute — I felt like I had a lot more I could give. I always wanted to have children, but I thought I had other talents and gifts that could be used, and I really struggled to understand what God thought of me.”

But she decided she loved God more than her own understanding. So she continued on in the faith, albeit more in tune with and aware of the gender inequalities in the Church.

The wedge was driven deeper when Wheelwright, a political science major, began studying the legal issues surrounding gay marriage. She had long struggled with the Church’s initial assertion that homosexuality is wrong, but it was after attending a 2012 panel discussion by gay students at BYU that Hannah decided she simply couldn’t agree with the Church’s stance. But again, she was mostly comfortable with staying in the Church.

That is, until her home teachers came to call. Wheelwright says they spent two hours with her, lecturing about her lack of faith and calling into question her need to pray to believe the words of modern prophets.

“As soon as they left I sank back into the couch — that was the first time someone had told me that what I believed wasn’t compatible with being a Mormon,” Wheelwright said. “That experience led me to have a pretty dark summer. I initially was grappling with, ‘Wait, can I stay and believe these things?’ But it turned to, ‘Wait, is God really there?’”

For more than six months, Wheelwright considered herself “agnostically atheist.” She was open to the possibility of God existing, but she did not readily believe. She decided that unless something changed, she would withdraw from the Church upon her graduation from BYU.

But something did change. She began to feel things that she knew weren’t coming from herself. 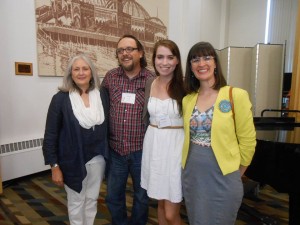 Wheelwright, second from right, presented at this year’s Sunstone Symposium about her role in the Ordain Women movement. (Photo courtesy of Hannah Wheelwright)

What brought Wheelwright fully back to a belief in God — and what she calls the most spiritual experience of her life — was a blessing she received from a woman. Words in the blessing were a direct answer to prayers Wheelwright had uttered earlier in the day about her Heavenly Mother and the nature of God.

“It was a powerful witness to me that I have heavenly parents,” Wheelwright said. “I know they’re there because I’ve communicated with them.”

Now, just a few months later, Wheelwright considers herself to be an active member of the  Church with an unorthodox faith — she’s learned to be Mormon on her own terms, not according to a checklist.

“I do read the scriptures. I do believe the leaders are inspired. There are definitely big issues I disagree with, but I see those as a way to grow closer to God,” Wheelwright said.

And as for that feeling the teenage Wheelwright had about using her talents and gifts to do more than follow the traditional Mormon woman’s path? She’s definitely doing more. Last year Wheelwright created a blog called “Young Mormon Feminists,” and it’s gained loads of followers and contributors. More recently, Wheelwright became one of the lead spokeswomen for the Ordain Women movement, where she advocates for big changes in the LDS Church.

All’s not perfect in her Mormon world, but she plans to stick with it.

“I can see much more importance and power and necessity in staying and trying to speak up for people who are grappling with these same issues,” Wheelwright said. “Even if people don’t agree with everything on my blog or everything about Ordain Women, it can be a way to help people know they’re not alone. It can empower people to take action in their individual communities instead of feeling frustrated and alone.”

Because I said so: Silence is golden Previous post

Utah Valley royalty: Locals who would reign Next post