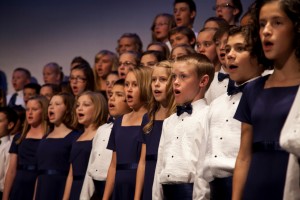 Children from East Valley Millennial Choirs & Orchestras, a sister organization to UVMCO, sing in concert at the Mesa Arts Center in Mesa, Ariz., in 2010. (Photo courtesy of UVMCO)

Musicians of all ages will have a new venue for showcasing local talent starting this fall as the Utah Valley Millennial Choirs & Orchestras (UVMCO) opens its doors in Provo.

UVMCO will offer six separate programs for performers, including four youth choirs, an adult choir and a symphonic orchestra. The adult choir and symphony are by audition; the youth groups are open enrollment. The groups will share Abravanel Hall’s stage for its inaugural Christmas concert on Tuesday, Dec. 3.

The group is one of four regional programs organized under the Millennial Choirs & Orchestras (MCO), which offers similar programs to more than 2,500 participants across the country. MCO began in 2007 as the brainchild of brothers Brett and Brandon Stewart, who established the organization to teach and encourage excellence in quality sacred and classical music.

“Since our conception six years ago in Orange County, Calif., we have received requests from Utah Valley for our organization to start a locale in that area,” Brett Stewart said. “We are thrilled with the addition of two new conductors to our team, which allows us the ability to expand to more areas.  As all four of our conductors are BYU graduates, we are particularly fond of Utah Valley and excited to be there.”

Former Mapleton Chorale conductor Cory Mendenhall, who will take the reins as musical director, said he was excited to offer an opportunity for local musicians to come together as “all ages, all faiths, one voice.”

“Our society needs and deserves more beauty and more strength in the divine,” Mendenhall said. “Choral music has such a power to transcend the differences and focus on the common in all of us. UVMCO is taking that purpose in greater stride by making it available to more ages and abilities.”

Mendenhall, himself a former associate director — and childhood-long member — of the Utah Valley Children’s Choir, said the program will provide an age-appropriate musical education tailored to each group — from basic concepts of rhythm and melody for the Young Singers Chorus to music theory, music history, and singing in multiple parts for the Concert Choir — as well as the opportunity to perform in the world-class Abravanel Hall.

One of MCO’s strengths, Mendenhall said, is that entire families can participate in the experience together.

“I think (that) has a place in Utah Valley,” he added. “Families, singles, couples, the elderly — I think it fits so many different avenues. There’s a place for everyone.”

Though UVMCO is new to town, Utah audiences have seen MCO in action — the group sold out concerts at Abravanel Hall and performed to a capacity crowd at the Salt Lake Tabernacle in 2011.

The group performed to much acclaim at the American Choral Directors Association national conference in March 2013. MCO has released three albums, including two of which have been ranked in the top 10 of the Billboard Traditional Classical chart.

Those interested in signing up for an audition or to enroll their children can visit www.millennial.org/join-uvmco.

Bits and pieces of Utah Valley: Back to school Next post