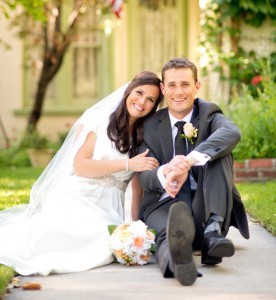 Alison Dyer and her husband, Steve Kofford. (Photo by Photography by Mckenzie)

Newlywed Alison Dyer is currently facing the same question millions of women grapple with every year — the name change. She got married in the Draper LDS Temple in August, then moved to Virginia with her husband and now is a week away from getting her new driver’s license. The pressure is on.

“I’ve always known I would take my husband’s name,” she said. “I wanted to take it because I feel like it symbolizes us coming together as a unit and I would like our children to have the same name as us.”

But she doesn’t feel ready to give up her birth name all together. She’s considered just tacking her husband’s last name on to the end, but worries about the length. Dyer doesn’t want to give up her middle name, Carol, which is also her mother’s middle name, one that she plans to pass on to a future daughter.

“I’m just playing around with a few combinations to see what sounds best,” she said.

Dyer is far from alone in her desire to maintain a sense of family connection and identity through her name. Lehi resident Brittney Roberts Warburton decided to keep her birth name as a middle name, an easier choice for Warburton, because she was not given a middle name at birth for that very reason.

“Many of my ancestors have kept their maiden names as middle names, which I thought was smart and respectful,” she said.

Warburton is happy with her name as it is. She believes it’s a way to honor her husband’s heritage along with her own in the union of their new family. It also makes everyday associations with her families easier, although she notes that she does have to use her full name now in order to be associated with her Roberts family.

“Being a feminist, I absolutely understand why a woman would decide not to take her husband’s surname considering it can be a social standard of behavior and not necessarily a reflection of a personal preference or belief,” Warburton said. “For that reason I think, ‘to each her own.’ It’s a personal decision made by the woman and, in some instances, together with the husband, and I have no place making a judgment on what is appropriate for their family.”

Mapleton resident Sarah Nasson seconds Warburton’s words. Because of Nasson’s decision to not change her legal name at all when she married, she’s faced judgment from her family and community. Some women make the choice for professional reasons, some to maintain a sense of personal identity. Nasson chose to keep her birth name, because she realized soon after being married that she “flat out didn’t want to” change it. She didn’t want to deal with the expensive legal process, nor did she like how common her would-be married name, Sarah Peterson, seemed to her. Her birth name was unique and fit her well. Nasson and her husband discussed creating a new family name together, and although they didn’t make any legal changes, they often refer to themselves as the “Nastersons.”

The choice has made naming their two daughters somewhat complicated. Although the girls’ legal names are now both “Peterson,” Nasson thinks they will eventually let the girls themselves choose or they will add one of the last names as a second middle or last name.

But the most taxing complication has been the assumptions others make about their names. It seems difficult for people to catch on, and in some cases, Nasson finds people who make it a point not to. Her advice to Utah Valleyites about dealing with this issue with sensitivity is centered on recognizing that different things work for different families.

“It’s a choice,” she said. “It may not be your choice, but that doesn’t make it wrong, inferior or superior. It works for us.”

Occasionally, Nasson does run into people who applaud her and her husband for doing what feels right for them.

“Several women have told me that they didn’t realize they had a choice,” Nasson said. “They wish they’d actually given it some thought.”