Home LDS Being LDS ‘Come, Follow Me’: A glance at the new youth curriculum at work

‘Come, Follow Me’: A glance at the new youth curriculum at work 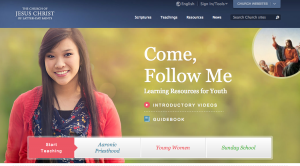 This is a screen shot of the “Come, Follow Me” teaching program website. The program was initiated eight months ago. (Photo courtesy of LDS Church)

When The Church of Jesus Christ of Latter-day Saints launched a new curriculum for its youth in January, there was no shortage of enthusiasm about the change. The spirit-led, student-driven approach of “Come, Follow Me” was a stark departure from the rigid lesson plans of old, and everyone was eager to sing its praises. After eight months with the new curriculum, members of the Salem Utah Stake share how the new program is going for them.

“A lot of what I see now is more spirit-led discussion. That’s huge,” he said. “It prepares the young men to serve missions and live life. It allows them to lead in a way we were preventing them from leading before.”

Collins works tirelessly to ensure each ward is implementing the program to the fullest.

“When we rolled this out, some wards just didn’t do it,” he said. “What I’ve found is that the boys are never the problem. When there is a problem, it’s usually the adults holding them back.”

To help leaders understand that their role is to facilitate discussion rather than instruct and to facilitate leadership rather than lead, he recommends encouraging leaders to watch one of the “Come, Follow Me” training videos once a week and read this talk by Elder Tad R. Callister once a month. If that doesn’t work, go to the bishop.

“You can only get so far without the bishop,” Collins said. “If he leads properly, the advisers will too.”

Collins and his wife also team-teach the stake missionary preparation class. It’s here they’ve seen the most powerful results of the “Come, Follow Me” program.

“The young men and women coming to mission prep are much more apt to get out of their comfort zone, participate and bear testimony,” Collins said. “They seem much more converted to the gospel.”

Joshua Cowley, a priest in the Woodland Hills Ward, is one such converted youth. He said that although his Sunday School class still follows the old way of doing things, his priest quorum has fully implemented the new curriculum and the changes have been wonderful.

“One of our more inactive boys was teaching a lesson on the family and our role as fathers. He basically would just ask questions and we would respond with what we felt,” Cowley said. “I could tell that he was specifically touched by that lesson. He’s been more active since.”

Cowley finds these discussions bring the spirit easily because everything is more personal.

“Our friends are sitting there testifying of truth,” he said.

Patti Meuter, the young women’s president in the Woodland Hills Ward, has also noticed lessons becoming more personal because of the new format. Her class unity has improved dramatically as a result.

“Say we’re doing a lesson on repentance and I call a couple of girls and ask them to prepare to share their thoughts on Sunday. Everything is more intimate,” Meuter said. “Sometimes, I think that until we hear from each other in that way, we don’t really know what’s going on with people. It’s made the girls and leaders less judgmental. It’s made us have more compassion for each other.”

Meuter believes the key to making the new program successful is instilling a sense of responsibility in the youth.

“At the first of the year, we let them know that this was only going to work if they had their own testimonies,” she said. “We told them that it’s on them if they want to take it seriously and find answers.”

She’s thrilled to see her young women rising to the challenge. Her class time goes by fast now, because everyone has something to say. Her girls come prepared to discuss things instead of just be taught.

“You can see their testimonies being strengthened,” Meuter said. “Ah-hah moments are happening all the time.”