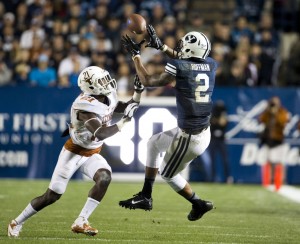 Senior receiver Cody Hoffman will score his first touchdown on Saturday according to our ten bold predictions for Saturday’s game.

1. The game will not be delayed by lightning.

2. Utah won’t score half its season average. Utah is averaging nearly 50 points per game, but will not score more than 25 against a stiff BYU defense.

3. BYU will win the turnover battle. BYU has been negative in turnovers every rivalry game since 2008 except one — the one Cougars win in 2009. BYU is -12 on turnover margin over that period.

4. Jake Murphy will have his best game to date. Spencer Hadley was the Cougars’ best cover-man at inside linebacker. Without him playing, inside receivers and tight ends — especially Murphy — could have big days. Murphy is averaging two catches for 37 yards per game on the season, but look for those numbers to be higher on Saturday.

5. Utah will try at least one onside kick or fake punt. Whether it works or not will be based on BYU’s preparation and execution.

6. There will be at least one off-setting personal foul. It wouldn’t be BYU-Utah without one.

7. Cody Hoffman will score his first touchdown of the season in the first half — getting BYU off to a good start. Quarterback Taysom Hill will need to throw the ball more effectively to beat Utah and a play-action pass to Hoffman early on would be a great way to start.

8. Despite Utah’s emphasis on stopping the run, Hill will convert at least one critical third-and-long with his legs, not arm. When Texas seemed to have him figured out, he would break one and keep a drive alive.

9. The Pac-12 officials (who are working this game) will make on blatant call against BYU and be showered with boos from the home crowd. BYU fans will, however, hope to avoid what happened to Gary Andersen’s Wisconsin team when dealing with Pac-12 officials against Arizona State last week (view http://youtu.be/JQmNYPOgx40).

10. BYU will win by 13 points and fans will rush the field — but after the final second expires (http://youtu.be/HQcAxq8M4Yk).