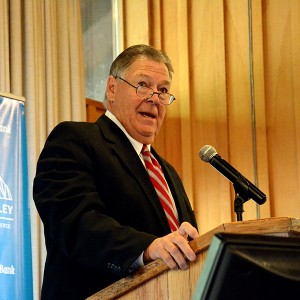 Here are 10 major positive changes coming to Utah County revealed during the course of the day.

“This will be the Utah County equivalent of City Creek,” said Coldwell Banker Commercial’s Brandon Fugal.

As part of the soon-to-be major construction project, there will be multiple high-rise Class A office buildings, residential units and additional retail space.

Fugal also mentioned a five-story building is in the works along I-15 in Lehi. A company has already pre-leased an entire floor of the building, he said. 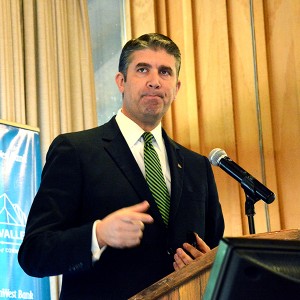 UVU President Matt Holland outlines his vision for UVU in the years to come. (Photo by Matt Bennett)

Utah Valley University has purchased 100 acres of land west of I-15 from Anderson Geneva Development Inc. and wants to “continue (their) aggressive buildout of the master plan,” according to UVU President Matt Holland.

In the next few weeks, UVU is planning a ribbon cutting on the intramural fields to get their expansion underway.

Allegiant Air, which currently has flights from Provo to Oakland and Provo to Mesa, will be adding a Provo to Los Angeles flight next week. Provo Mayor John Curtis is optimistic for the continued growth out of the Provo Airport.

A connector road will be built along the Murdock Canal Trail from Cedar Hills’ North Utah County Boulevard to Highlands’ Alpine Highway.

While this $4 million project might seem like any other on the long list of UDOT’s 2014 to 2017 docket, this road will connect Highland residents to Cedar Hills’ Walmart and Lone Peak High School, as well as Cedar Hills residents to Mountain Ridge Junior High and other shopping.

Five years ago a nine-story, 300-suite Embassy Suites Hotel and Convention Center was announced for construction near the newly-constructed I-15 exchange in Pleasant Grove. Almost no progress has been made at the site since that time.

A rendering of Midtown Village in Orem.

Provo City Center Temple will be dedicated sometime in 2015 according to Orem Mayor Jim Evans.

A tenant for the former Nordstrom location at University Mall is very nearly a done deal, according to Fugal. “This is a deal that should have been done six months ago. It frustrates me,” Fugal said.

Midtown Village, a major multi-family and retail center located near 400 South and State Street in Orem, will soon have the financial backing to be finished, according to Fugal.