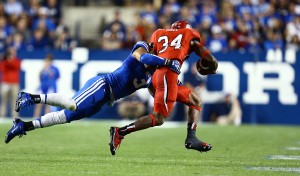 BYU racked up 443 yards of offense, but came away with only 13 points in another frustrating loss to its rivals up north – handing Utah the fourth straight win in the rivalry.

The Cougars outgained the Utes in every category and held them to just 1-of-14 on third down, but still fell short in another nailbiter, losing 20-13 in Provo.

The game went down to the final play, as is customary when the two rivals meet on the gridiron. But Taysom Hill’s hail Mary pass fell incomplete to cap off a tough night.

The Cougars, fresh off the bye week after running all over Texas, didn’t look as composed as they did in their win over the Longhorns. In fact, BYU totaled more yards through the air than on the ground, a point offensive coordinator Robert Anae said was the downfall.

“We got beat tonight in the trenches, and that’s something that we’ve got to simply get better at,” Anae said. “Credit goes to Utah. It was an offensive effort, and their defense beat us.”

The Utes started by kicking two field goals before wide receiver Dres Anderson caught a pass, and got loose in the Cougar secondary, taking it inside the 10-yard line for a 74-yard reception. The play set up a 1-yard touchdown pass from Travis Wilson to Anthony Denham, which gave the Utes the 13-0 lead they would take into halftime.

BYU came out quickly in the third quarter, moving the ball down the field, but the drives stalled in the red zone, and the Cougars settled for two Justin Sorensen field goals. BYU had another empty red zone trip when JD Falslev returned a punt 58 yards to the 15 yard line, but the Cougars went 4-and-out, missing an opportunity which could have changed the outcome. Mendenhall said the red zone problems decided the game.

“We’ll have to take a better look and try to analyze what (went wrong in the red zone,)” Mendenhall said. “In going back to the number of missed opportunities, we had a missed field goal early on.  That would be one of the handful of plays that could really change a game like this.”

The Utes added another goal-line touchdown pass from Wilson in the fourth, but the Cougars regrouped and drove the length of the field to allow Michael Alisa to score from one yard out, bringing BYU within a touchdown again. But the comeback attempt fell short, despite two drive attempts in the final five minutes.

Hill finished the game with 99 yards rushing on 20 attempts, as well as 260 yards through the air on 18-40 passing. Wilson, however, converted 24-35 for 273 yards and the two touchdown passes, despite the Utes’ toughest defensive test of the season.

“BYU is definitely the toughest defense we played so far,” Wilson said. “I just wanted to make sure to handle the ball well and make smart decisions.”

The Cougars suffered a potentially more crucial loss in the game, when running back Jamaal Williams had a scary neck injury after converting a fourth down. Williams was carted off the field and taken to Utah Valley Regional Medical Center, where he is alert and continues to improve, according to BYU Athletics. 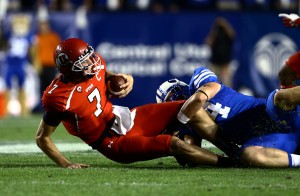