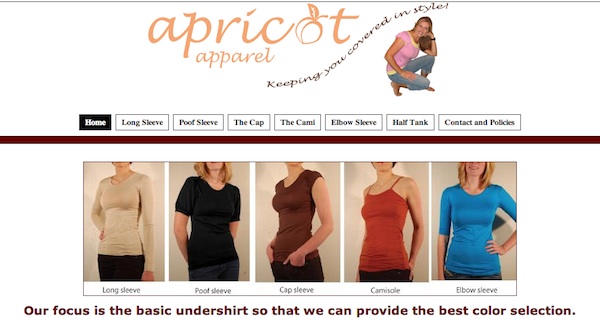 Nine years ago, Shauna Peterson was working 11-hour days to get her modest undershirt clothing company off the ground. At the time, the Mapleton mother was merely trying to provide an affordable layering option for her tall and then-teenage daughters and other girls and women who wanted to dress modestly.

Even though she was one of many such clothing brands on the market — her competitors included Shade Clothing, Undertease and ModBod — her Apricot Apparel shirts sold quickly and Peterson struggled to keep up with demand. She wasn’t sure whether or not the “trend” would persist but decided to enjoy the ride while she could.

“I really thought that maybe it would not continue,” Peterson said. “I thought maybe it was just a three or four year thing.”

Like Peterson, in 2005 dozens of other enterprising women — many from Utah County — were rushing to market with their version of the so-called “Shade” shirt, hoping to capitalize on the modest undershirt craze. Mormon women were buying the shirts quicker than companies could manufacture them. With the influx of cash, some companies paired with investors and quickly expanded their lines to include other apparel, maternity and swimwear. Others stuck to the basics and developed loyal followings.

Now, almost a decade later, the one-time trend has become an essential in many LDS and non-LDS women’s closets. But of those first companies to market only a handful remain in business and the rest are only history.

Peterson’s company is one of those lucky few. Type “Modest undershirts” into a Google search and your top hit will likely be Peterson’s (admittedly outdated) website. Her company, Apricot Apparel, has outlasted many of her competitors — a fact that almost surprises Peterson. She’s not grossing millions of dollars every year, but only works one to two hours a day and enjoys a “hobby that makes money” and provides a valuable product for other women.

“It has absolutely become a staple in people’s wardrobes. I don’t think it will ever go away,” she said.

Not cut from the same cloth

When the modest undershirt trend was first revealed, many companies claimed credit for the idea. But now, as companies have shuttered and competition has quieted, most admit the idea started with Shade Clothing founder Chelsea Rippy. Rippy wanted to create a stretchy, snug-fitting shirt that would cover all the right places and allow her to layer any style shirt she wanted on top.

Rippy developed her innovative undershirt and began selling them through home parties, then at storefronts throughout the state. Imitators quickly materialized, crafted by entrepreneurs who thought they could improve on the product’s fabric, colors and price.

Chantelle Thomson, owner of Diviine Modestee, launched her company in 2005 with a line of layering cap sleeve tees and camisole tanks.

“In the beginning it was insanely cutthroat,” Thomson said. “What diversified us was that Shade did elastic in the neckline and we did a ribbon in our neckline. We also use a lycra spandex because I’m very into high quality for a reasonable price.”

In fact, Thomson says her products are so high quality that her company initially struggled because customers didn’t need to repurchase as often as they did from other companies. To diversify, she expanded her company’s offerings, beginning with her Divinita Sole modest swimwear line in 2007. That line has now grown into one of the leaders in modest swimwear, sold at exclusive roadshows at Costco warehouses across many states. Diviine Modestee also has lines of women’s dresses and tween clothing and is launching a juniors line this month.

“I am amazed at the success we’ve had,” Thomson said, “but we are the tortoise in this industry. We’ve grown the slowest. The first two years other companies did millions and we didn’t hit the million mark for about four years. It took us a while to really solidify ourselves as a leader in the modest clothing industry. But now our customers know that we are here for them, we are loyal to being modest and we’re not going anywhere.”

Battle of the brands

In the years since the trend first emerged, there is no clear leader in the modest undershirt industry. Shade Clothing is still one of the most well-known names in the industry, even though the company liquidated its assets in 2010. It was acquired by Gymboree and relaunched for a few years, only to close again in July.

Layers Clothing was another major brand that met with trouble. A November 2009 warehouse fire destroyed nearly all of company’s inventory and founder Michelle Boley decided not to rebuild. However, the company relaunched in July with a swimsuit line, which new owner Haylie Studebaker hopes to eventually expand into an entire women’s clothing line.

“In the future we plan on having a storefront, as the company did before, for customers to come browse and purchase products,” Studebaker said. “We are considering house parties just like before. We have had so many of the previous consultants reach out to us, which is so amazing!”

Although some modest clothing companies have closed their doors, those that remain say they are in the market to stay.

“I really feel like we’ve all kind of matured,” Thomson said. “I really believe every one of us has found our niche and what works for us. I don’t feel any competition and any need to be competitive with any of those companies.”

For Thomson, her niche is modest yet fashion-forward clothing and swimwear lines for tweens, teens and women. And Peterson, of Apricot Apparel, is sticking with her undershirts and tanks. She’s deliberately kept her company small, selling her products mostly online and only expanding her colors and undershirt designs every few years.

“I’ve stayed very intentionally small on purpose because I’ve seen the trouble that other companies have run into,” she said. “I didn’t do this for the money, I just did it for something fun to do. I didn’t want it to be huge. I’ve kept it simple and kept expenses low.”

For her, the biggest payoff is the thank-you emails she receives from grateful customers.

“I get letters from all over the U.S. from people thanking me for providing a way they can wear clothing and feel comfortable by just putting on an undershirt,” she said. “It’s not just the LDS community; there really is a demand all over. I don’t think it’s ever going to go away now.”